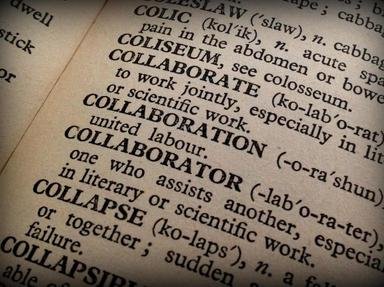 All of these words are listed as synonyms for "promise" by a major thesaurus website - they however also have special or secondary meanings. Can you match each promise to the situation or description it would be most appropriate to?

Quiz Answer Key and Fun Facts
1. Given by a product manufacturer

A guarantee - frequently also spelled as "warranty" - is a manufacturer's promise that a product of service is free of faults and matches the specifications advertised. As, of course, there is no certainty in manufacturing even with the most extensive quality control, a guarantee always includes a clause that, in case a product should fail early in its lifetime, it will be repaired or replaced at no cost to the buyer.

Guarantees on non-consumable items are required by law in almost every jurisdiction and, depending on the product and locale, have a minimum duration of anywhere between just a few days and several years. Quality-conscious manufacturers often make a point of offering terms well above the minimum, occasionally even unlimited ("lifetime guarantee").
2. Between nations, often of a military nature

Pacts or alliances are formed between nations, often as a mutual promise of assistance in the case of war or other external threats. The term was most prominently used by the "Warsaw Pact", the military alliance of the Soviet controlled Eastern bloc of communist states - effectively the counterpart of NATO.

The term has somewhat fallen out of use since the end of the Cold War, as many historical pacts using that term are associated with aggression or autocratic regimes. Today, "alliance" is the more common term.
3. Associated with upcoming donations

A pledge is a forward-looking promise, quite often associated with donations or funding. The concept comes into play where a tally of funds is desired, either in terms of a donation drive where a running total is communicated at a time where it is difficult to actually initiate the transaction (e.g. during a meeting) or because funding only makes sense once a certain minimum is reached.

The latter use has become quite popular in terms of crowdfunding - a developer wants to produce an item but needs a certain minimum level of sales to be profitable. The prospective seller collects pledges - promises to buy one or more of the item at a certain price - but no money actually changes hands until the required funding target for production is needed. At that time, the pledge automatically becomes a purchase, the product is made and shipped when ready. This gives the prospective buyers the certainty that their payment is taken only when the product can actually be made - they do not need to worry about recovering an advance on a product that never materializes.
4. Exchanged at a wedding

A vow is a most solemn promise and in Christian contexts, is taken before God. Most commonly, you'll encounter this as "exchanging vows" as the central part of a (religious) wedding, but there is also the divine vow - a promise to dedicate one's life or a certain number of years to God as a monk or nun.

By the most technical definition, a vow always involves a direct promise to a divine entity, while an oath - also a solemn promise often associated with the divine - merely calls the divine as a witness.
5. Financial instrument offered by governments

Bonds are the most common financing instruments for governments and can also be issued by corporations. A bond is essentially the counterpart of a loan: In the case of a loan, the entity borrowing will have to follow the rules and terms set by the lender while in the case of a bond, the borrower sets the terms and conditions and investors can only choose the amount to invest. The bond includes a promise to repay the principal as well as a certain amount of interest.

Companies - but not nations - can also issue stock, which represents a certain fraction of ownership of the company and allows the owner to vote on important issues of governance. Stock usually promises a higher yield than bonds, but also a higher risk: In the case the issuing company goes bankrupt, the investment in stock is inevitably lost while holders of bonds have a chance to recoup at least part of their investment.
6. Key term in the card game "Bridge"

In Bridge, each hand played is a contract - a promise by the side who calls trump to take a certain number of tricks. Out of thirteen available tricks, the declarers must take at least seven (a 1-level contract), but if they bid higher than the first level, they need appropriately more up to the very rare Grand Slam - a 7th level contract requiring all thirteen tricks. Most contracts are played at levels 2 (8 tricks) to 5 (11 tricks).

Unlike some other card games involving an auction, the final bid is also the contract - you do not get to correct your own bid to a higher-ranking game. The contract must be reached through exact bidding, so players actually use conventional bids to somewhat describe their hand strength and distribution to their partner, ensuring the final contract has a high chance to succeed. One of the worst things to happen in the game is to inadvertently pass on a conventional call by your partner, forcing your side to play out a hand in a suit you are extremely weak in!

A contract is also one of the most basic legal instruments in business - in fact, you are probably entering into several hundreds if not thousands of contracts per year without even noticing: Each time you go to a store and purchase something - yes, even that 39 cents can of soda - that purchase is actually a contract.
7. Task to be solved in a chess puzzle

In a chess puzzle, the stipulation is given along with the position to tell the solver what goal they have to achieve. Most commonly, this is that white has to move and mate black in a certain number of moves against the best defense - black cannot escape mate after the correct first move. More rarely, there are helpmate problems (white must mate from a seemingly hopeless position while black does everything to help them) and other weird tasks.

A second group of chess puzzles is made of "white to win" or "black to draw" problems in which the player has to either secure a dominant advantage or find a way to save a game. Many of these latter problems are based on actual grand master games in which one side either found a surprising key move - or missed it.
8. Biblical term associated with an ark

When hearing the word "ark", you might first think of Noah, but this is not the ark referenced in this question. Instead, the term refers to the Ark of the Covenant, a specially constructed carrying case for the stone tablets upon which the Ten Commandments were inscribed. The Ark became a vessel for the presence of God. Its whereabouts have been unknown since at least the 6th century BCE.

An accurate replica of the Ark - as far as its appearance can be inferred from the descriptions in Exodus 25 - prominently features in the blockbuster movie "Raiders of the Lost Ark", however it is far from being the only such recreation. Especially the description of the two Cherubim adorning the lid says little about their exact size or shape, so even in spite of some of the building instructions being extremely precise, it is not possible to say exactly what the real Ark looked like.
9. Physical item, often used in gaming

A token is a physical representation of a promise, most often one related to a certain value. While tokens can take any form, the most common type of token you will find in circulation today is a coin-like object used as an intermediate means of payment to avoid the handling of cash in insecure locations such as arcade machines or casino tables. The player first purchases tokens with their real money, then these tokens are used in the actual machine or on the table.

As tokens are not legal tender, they can be redeemed only at the location where they were purchased, making lucrative theft of casino tokens a close to impossible proposition - casinos keep track of where their chips go and if there is no record of you actually having gained possession of those chips at the tables, you will have a very difficult time cashing out any really significant sum. (This also means that taking casino chips as payment is a bad idea. Even if the chip is genuine, you will likely not be able to cash it - and it's illegal as well!)
10. In court or when taking office

An oath is a solemn promise, traditionally asking God (or, in a polytheistic religion, one or more of the gods) as a witness. Today, oaths may also be sworn without a divine invocation.

Oaths are typically encountered in two situations - upon taking office and in court. In court, witnesses may be required to take an oath to say the truth upon delivering important testimony, with the consequences of intentionally lying being much more severe when under oath than on an unsworn testimony.

On the other hand, an oath of office itself bears little direct legal importance - it is a ceremonial act that reinforces the duties of the office holder to properly discharge the office. By taking the oath, the new holder agrees to actually assume office. Depending on the office, the oath is then either followed by the official proclamation of appointment (such as, for example, when becoming a military officer) or, in case of offices where there is no superior to declare such an appointment, the delivery of the oath effectively becomes the moment of assuming office. (In the case of the President of the United States, for example, the term of office begins at noon on January 20, but the new President is not actually permitted to act as such until he has taken the oath.)
Source: Author WesleyCrusher