A quiz about the song by Linkin Park, "Castle of Glass". Are you ready?

Share on Facebook
Share on Twitter
Share by E-Mail
Author
Aditya11
Time
3 mins
Type
Multiple Choice
Quiz #
358,462
Updated
Jul 23 22
# Qns
10
Difficulty
Average
Avg Score
7 / 10
Plays
201
This quiz has 2 formats: you can play it as a or as shown below.
Scroll down to the bottom for the answer key.

Quiz Answer Key and Fun Facts
1. In which of the following video games is "Castle of Glass" featured?

"Castle of Glass" is featured in "Medal of Honor: Warfighter" a game developed by Danger Close Games and published by EA games. This song is also featured in the Linkin Park album "Living Things".
2. In the official video of "Castle of Glass", who says the quote written at the end of the video?

The quote is "All great things are simple, and many can be expressed in single words: Freedom, Justice, Honor, Duty, Mercy, Hope".
3. How many people are walking towards the sunlight in the end of the music video?

If you see between the two people on the left side you may spot the sixth person walking ahead of them.
4. Complete the lyrics: "Cause I am only crack in this castle of glass, hardly anything else ______________."


Answer: I need to be

The news are believed to be of the death of the father of the boy in the start and of the girl in the end.
6. Which singer gives the lead vocals for this song?

Mike Shinoda is also a singer, Joe Hahn is the keyboardist, and Brad Delson is the lead guitarist.
7. Who says the starting lines of the song?

Chester Bennington is a singer, Rob Bourdon is on the drums, and Dave Farrell is on the bass guitars.
8. "Castle of Glass" was nominated for "Best Song in a Game" award at the 2012 Spike Video Game Awards.

It is the second song in the album "Living Things". This song was released after the song "Burn it Down" in the album.
10. "Castle of Glass" was recorded at NRG Recording Studios.

Castle of Glass was recorded at the NRG Recording Studios and it was produced by the singer of the band Mike Shinoda and Rick Rubin.
Source: Author Aditya11

This quiz was reviewed by FunTrivia editor kyleisalive before going online.
Any errors found in FunTrivia content are routinely corrected through our feedback system.
Most Recent Scores
Jan 29 2023 : Guest 71: 3/10
Dec 28 2022 : Guest 98: 10/10 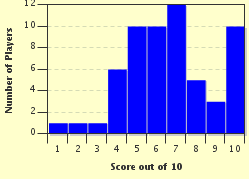 
Other Destinations
Explore Other Quizzes by Aditya11