Quiz Answer Key and Fun Facts
1. Which of these is not a song in "Minutes to Midnight"?


Answer: and wash away


Answer: "Hands Held High" and "In Between"

Mike Shinoda does rap in "Faint" and "Figure .09", but the songs aren't in "Minutes to Midnight".
4. From which song are the following lyrics taken: "When my time comes forget the wrong that I've done, help me leave behind some, reasons to be missed"?


Answer: Leave Out All The Rest

"Leave Out All The Rest" is the third track in this album and talks about people's mistakes and forgiveness.
5. "Minutes to Midnight" was produced by Chester Bennington and Mike Shinoda.

"Minutes To Midnight" was produced by Rick Rubin and Mike Shinoda. In "LPTV" episode 11: Linkin Park talk about a new recording studio and whole new music adaptations. "LPTV" is a special channel that airs on Linkin Park's official website and also on Linkin Park's youtube account. They often show clips of the band producing music or just fooling around.
6. Which band member plays the most instruments?

"Dave Farrell has studied and plays the bass guitar, electric guitar, cello and violin" (Wikipedia). He has also been known to play an upright bass at some concerts.
7. What song has no lyrics?

"This short song was created near the end of the album writing process. The dual-meaning of the word "wake" seemed an appropriate introduction to the record". ("Minutes To Midnight" Lyric Book)
8. Fill in the blanks: I close both locks below the window, ____________.


Answer: I close both blinds and turn away

This is from Linkin Park's third single from "Minutes To Midnight": "Shadow of The Day". The song talks about having to move on despite your friends' opinions.
9. "What I've Done" talks about the errors as a community we've committed and how we ruined the earth instead of making it better.

This song was the last song written in "Minutes To Midnight". "What I've Done" hit number one in the U.S and Number two in Australia.
10. The front picture of the album is from the video clip of what song?

The picture shows all six band members looking at Salton Sea from a steep hill. In "LPTV" episode 12, Chester explains how this setting was the ideal place to make this video clip.
Source: Author triviadude12 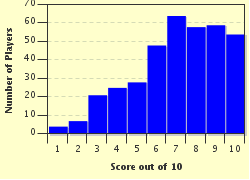 
Other Destinations
Explore Other Quizzes by triviadude12