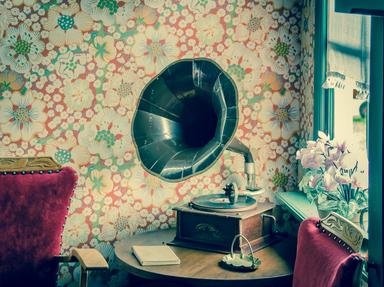 
Answer: Georgia on My Mind

Hoagy Carmichael and Stuart Gorrel wrote "Georgia on My Mind" in 1930. Carmichael was the first person to record the song.

Hoagy Carmichael and Sidney Arodin wrote "Up a Lazy River" in 1930. Many people have recorded it since then. Bing Crosby and Louis Armstrong recorded it for their album "Bing & Satchmo" in 1960. But perhaps, the song's most famous recording was done in 1952 by The Mills Brothers.
3. 1931: "Why not take all of___?" What is the rest of this first line and song title?

Gerald Marks and Seymour Simons wrote "All of Me" in 1931. The song was written in B-flat major. It was first sung by Belle Baker on the radio. That same year Paul Whiteman and His Orchestra recorded it. The Louis Armstrong version reached number one on the US Pop Charts. In 2000, "All of Me" received the Towering Song Award" by the Songwriters Hall of Fame.

Although not released until 1932, the song was written in 1931 by Jay Gorney and Yip Harburg. It tells the story of a person chasing the American dream only to have those dreams dashed by the Great Depression. Bing Crosby and Rudy Vallée both recorded the song in 1932.
6. 1931: What word is missing in the line from "Dream a Little Dream Of Me"? "Just ____ me tight and tell me you'll miss me."

Fabian Andre, Wilbur Schwandt, and Gus Kahn wrote "Dream a Little Dream of Me" in 1931. It was first recorded by Ozzy Nelson and Wayne King and His Orchestra that same year. Ernie Birchill sang the latter. Perhaps the best-known recording was by Cass Elliot with The Mamas & the Papas in 1968.
7. 1931: Complete this line from "Goodnight, Sweetheart." "I hate to ____ ____, but I really must say. Goodnight, sweetheart, goodnight."

Ray Noble, Jimmy Campbell, and Reg Connelly wrote "Goodnight, Sweetheart" in 1931. It was first recorded by the Wayne King Orchestra, with Ernie Birchill on the vocals. It was the theme song of the 1990 Britsh TV sitcom "Goodnight Sweetheart".
8. 1931: What country completes this song title: "Lady of _____"?

Tolchard Evans and Erell Reaves, (also known as Stanley J. Damerell), Robert Hargreaves, and Henry Tilsey, wrote "Lady of Spain" in 1931. The first recording was done by Al Bowlly and Tino Folgar in 1931. In an episode of "I Love Lucy" from season 3 called "Ricky's Life Story," Ricky Ricardo (Desi Arnaz) sang the song.
9. 1931: According to the song "Life is Just a Bowl of Cherries," why shouldn't we "take it serious"?

Ray Henderson and Lew Brown wrote "Life Is Just a Bowl of Cherries" in 1931. Ethel Merman was the first to publicly sing it when she sang it in "Scandals of 1931." It has since been recorded by many artists, including Judy Garland, Rudy Vallée, and Johnny Mathis.
10. 1931: According to a song that Cab Calloway co-wrote and sang, who is a "Moocher"?

Cab Calloway, Irving Mills, and Clarence Gaskill wrote the jazz song "Minnie the Moocher" in 1931. Calloway recorded it the same year. Calloway added the scat parts such as "Hi De Hi De Hi De Ho" and had the audience repeat it back until he got so fast they couldn't keep up.
Source: Author Ilona_Ritter

More 1930s Music and before Quizzes