The Lyrics of Evanescence Trivia Quiz

Evanescence is a band headed by singer Amy Lee. They have released numerous singles and CDs, but can you remember the lyrics?

Share on Facebook
Share on Twitter
Share by E-Mail
Author
dlbn
Time
4 mins
Type
Multiple Choice
Quiz #
334,099
Updated
Jul 23 22
# Qns
15
Difficulty
Average
Avg Score
10 / 15
Plays
492
This quiz has 2 formats: you can play it as a or as shown below.
Scroll down to the bottom for the answer key.

Quiz Answer Key and Fun Facts
1. Which words are missing from this line of Evanescence's "Bring Me To Life"? "How can you see into my eyes like ___ ___"

"How can you see into my eyes like open doors" is the opening line to "Bring Me To Life". Amy Lee sings this song with Paul McCoy. "Bring Me To Life" is featured on the soundtrack for the movie "Daredevil".
2. According to Amy Lee in "Snow White Queen", why shouldn't her love scream anymore?


Answer: "Cause all I want is you"

This comes from the line "Don't scream anymore my love, cause all I want is you". It is the final line in the chorus of "Snow White Queen".
3. In Evanescence's "Tourniquet", what do her wounds cry for?

"My wounds cry for the grave" is the first line of the last stanza in Tourniquet. Tourniquet is one of the darker-themed songs on Evanescence's "Fallen" CD.
4. In "Missing", Amy Lee asks if she is "that unimportant" or so...what?

Amy Lee sings, "Am I that unimportant? Am I so insignificant?" These lines only appear once in "Missing". This song appears on the CD entitled, "Anywhere But Home".
5. Which Evanescence song contains the lyrics, "Fear is only in our minds but it's taking over all the time"?

"Fear is only in our minds but it's taking over all the time" is from the second stanza of "Sweet Sacrifice". This song is found on the CD "The Open Door".
6. Which of the following lines come from Evanescence's "Before the Dawn"?


Answer: "Somehow I know that we can't wake again from this dream"

"Long lost words whisper slowly to me" is the opening line from "Haunted". "I'm so tired of being here, suppressed by all my childish fears" is the opening lyrics of "My Immortal", and "Thumbing through the pages of my fantasies" comes from "Thoughtless". This leaves "Somehow I know that we can't wake again from this dream."
7. Complete this line from Evanescence's "My Immortal". "When you cried I'd wipe away all of your ______"

"When you cried I'd wipe away all of your tears" is the first line in the chorus of "My Immortal". "My Immortal" is one of the slow-paced songs on two of Evanescence's CDs. It appears on the "Origin" and "Fallen" CDs.
8. "You'll become their sacrifice" comes from the Evanescence song "Sweet Sacrifice".

Although the word 'sacrifice' might hint that this line is from "Sweet Sacrifice", it isn't. This lyric is actually one of the last lines in "The Only One", on the CD "The Open Door".
9. Which word correctly completes this line from Evanescence's "Lithium"? "Don't make me ____ alone"

"Don't make me sleep alone" is the first line of the second stanza in "Lithium". "Lithium" is found on the CD "The Open Door". Lithium is the element "Li" on the periodic table of elements.
10. According to the lyrics of "Listen to the Rain", what are the raindrops waiting for someone to hear?

The answer to this question comes from the lines, "Frantically searching for someone to hear, their story before they hit ground".
11. What is the missing word in the following lyric to "Everybody's Fool?" "I ____ the truth now"

These lyrics come from the end of the song. "Everybody's Fool" is about a woman who thinks that everyone is fooled by the act she puts on. At the end of the song, Amy Lee reveals that the woman is the one who's really a fool.
12. According to the lyrics of "Anywhere" by Evanescence, love is more than your ____?

These lyrics come from the line "where love is more than just your name". "Anywhere" is a slow paced song by Evanescence. It is featured on Evanescence's "Origin" CD.
13. Is this lyric from Evanescence's "Going Under" written correctly? "So go on and scream"

"So go on and scream, scream at me" are the first two lines of the third to last stanza of "Going Under". After this stanza, the chorus is repeated twice.
14. In "Good Enough" by Evanescence, Amy Lee says she shouldn't let you do something completely. What is this thing?

This answer comes from the lyrics, "shouldn't let you conquer me completely". It comes from the middle of the song. "Good Enough" is featured on the CD "The Open Door".
15. What word is missing in this lyric from Evanescence's "Breathe No More"? "Convince me that I've been ___ forever"

"Breathe No More" comes from Evanescence's "Anywhere But Home" CD. After Amy Lee first sings the title of the song, this is the next line.
Source: Author dlbn

This quiz was reviewed by FunTrivia editor kyleisalive before going online.
Any errors found in FunTrivia content are routinely corrected through our feedback system.
Most Recent Scores
Jan 18 2023 : Guest 81: 9/15
Dec 12 2022 : Guest 98: 15/15 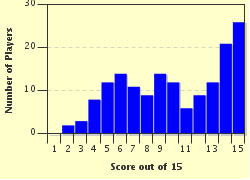