Oxford United were the first English club to win a major trophy and to be later relegated from the Football League. This quiz looks at the up and down history of this English football club.

Quiz Answer Key and Fun Facts
1. By what name was Oxford United known before their change?

Conicidentally, when Oxford United lost their league status in 2006, one of the two clubs that were promoted from the conference that year to replace them was Accrington Stanley.
3. What controversial soccer pundit and reasonably successful manager played for Oxford United between 1959 and 1971?

Ron was signed from Aston Villa, and was the captain of Oxford United as they rose from the Southern League to Division 2. He retired and became manager of Kettering Town, Cambridge United, West Bromwich Albion, and eventually Manchester United.
4. What colour shirts do Oxford United wear for their home matches?

Hence "The Yellows" being one of the more imaginative nicknames of the club.
5. Which newspaper magnate took control of Oxford United in 1982?

Although Jim Smith won the Division Two title in 1985, he left to join Queens Park Rangers during the close season. He never managed Oxford in the top flight. He returned as manager in 2006 (after spells at Newcastle United, Portsmouth and Derby County), but was unable to save the club from relegation into the conference.
7. Oxford United won the Milk Cup in 1986, winning 3-0. Which London team did they beat in the final?

After beating Aston Villa over two legs in the semi-final, a trip to Wembley was next. The goals were scored by Trevor Hebberd, Ray Houghton, and Jeremy Charles. Queens Park Rangers were managed by a certain Jim Smith, who had taken Oxford United from Division 3 to Division 1 in back to back seasons: Division Three 1983-84, Division Two 1984-85, Division One 1985-86.
8. Which of the following players appeared for Oxford United during the 1980s?

John Aldridge was signed from Newport County in 1984, before being sold to Liverpool in 1987, as a replacement for Ian Rush. Oxford signed Dean Saunders from Brighton and Hove Albion shortly afterwards, but was later sold under controversial circumstances to Derby County. Mark Wright came through the youth teams before moving on to Southampton, but later returned for a brief spell as manager in 2001.
9. In 1988, the sale of which Welsh international striker to Derby County resulted in the resignation of manager Mark Lawrenson?

Mark Lawrenson resigned when his top scorer was sold to Derby County without his consent for what many considered a cut price fee. At the time, Derby County was owned by Robert Maxwell, whilst Oxford United was being run by his son. Dean Saunders later followed in John Aldridge's footsteps and transferred to Liverpool.
10. The decline in the club's fortunes was accelerated by a crippling financial crisis in the 1990s, leaving the Kassam stadium unfinished for several years. What was the name of the ground (which had been home since the 1920s) that Oxford United wanted to leave?

Matches were played at the Manor Ground from 1925 until 2001, when they eventually moved, to Kassam Stadium. As the new ground only had 3 sides constructed, many say it was not finished.

Beech Road, Osler Road, and London Road were three of the four sides of the Manor Ground. The fourth side being the Cuckoo Lane End where visiting supporters stood in the rain. The Manor later became the site of a hospital.
Source: Author Dave1968

This quiz was reviewed by FunTrivia editor Nightmare before going online.
Any errors found in FunTrivia content are routinely corrected through our feedback system.
Most Recent Scores
Dec 26 2022 : sam388: 10/10
Dec 24 2022 : Guest 78: 10/10 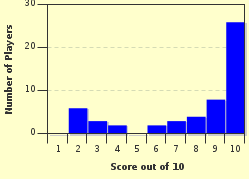 
Other Destinations
Explore Other Quizzes by Dave1968