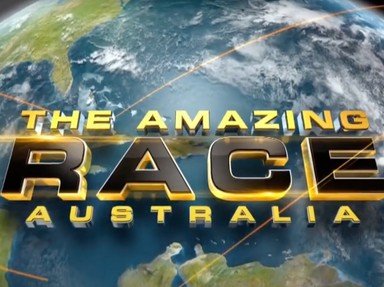 A Detour is a choice between two tasks, each with their own pros and cons. Eleven Detour clues were encountered in "The Amazing Race Australia 6" on a course taking teams to seven different countries. Good luck!

Ten teams left Melbourne bound for Ouarzazate, Morocco while another set of ten left Sydney bound for Marrakesh, but what they all had in common was a full first leg of the race complete with Road Block and Detour.

In Leg 1, the Ouarzazate group finished a Detour in the city's Old Town; all ten teams completed the 'Off the Line' task in which they folded and sorted locals' laundry. In Leg 2, the Marrakesh group all completed the 'Splash' Detour task, counting brass cups on the market's water sellers.

This being said, in Leg 2, Bren and Anja failed to arrive at their Detour task in time, and it closed before they could complete it. The penalty found here, along with the penalty incurred from not completing a subsequent task, spelled their swift end on the race.
2. During their visit to Athens in Leg 4, teams could either learn a routine or make which of these local items?

Racing to the Technopolis in Athens, sixteen teams chose between either 'Step Up' or 'Step Down' for their Detour, and each required that they work on fine details. In 'Step Up', generally seen as the quicker task, teams had to learn the Changing of the Guards of the Evzones, walking in step to the approval of their trainers.

In 'Step Down', however, teams needed to make two pairs of Greek sandals and, wearing them in a three-legged race, cross a finish line with their works intact.
3. In Santorini, most teams sorted fish for their Detour task. How many repaired fishing nets for the 'Bustle' Detour task in Leg 5?

Only Jodie and Claire and Tiffany and Cynthia went for the 'Bustle' task, which had them meticulously repairing five metres of damaged fishing nets in the fishing port of Vlychada on the island of Santorini. All other teams got their hands dirty instead, completing 'Hustle'. For this task, they had to grab the catch of the day and weigh out exact amounts of specific fish for the market to sell.
4. In Kula, Türkiye, teams selected one of two Detour options involving rural customs in the mountains of Western Türkiye. One involved dancing, but the other involved what?

While some teams took to the streets for 'Street Procession', learning a folk dance to perform in the alleys with locals, others completed 'Sweet Obsession', which had them wrapping mesir pastes in gold foil and tossing them over a balcony for their partners to catch in the courtyards below.

In either case, the teams that finished could race on foot to the next Pit Stop with the hope of not being eliminated.
5. In Bogotá, Colombia (in Leg 10), all teams completed the same Detour task involving bike polo.

With several teams sitting out the leg due to COVID-19 isolation, only seven pairs headed to Bogotá and found a Detour in the inner-city there. This time, they could choose either 'Sparkle' or 'Spoke' though all of them chose the latter, forcing them to play bike polo in a city court and score a goal without letting their feet touch the ground. Had they chosen 'Sparkle' they would have needed to sort real and fake emeralds at a local jeweller's.
6. Leg 11 sent teams to Medellín, Colombia where teams chose either 'Brew' or 'Bunch'. For both tasks, penalties were issued for teams.

One penalty was assigned on each task. In 'Brew', teams had to search a sack of coffee beans for five that had letters written on them. If they could spell out a keyword-- AROMA-- they could get their next clue. In 'Bunch', however, teams cut flowers and created a silleta, a worn piece designed and arranged for the local Festival of Flowers.

Chelsea and Jamus took a penalty for quitting the 'Brew' Detour, completing it too late for them to be able to see the lettering on their beans; Stuart and Glennon took a penalty for using another team's silleta to advance in the leg. In both cases, penalties were served at the Pit Stop though neither placed last.
7. Leg 13, completed in Belize City, saw a Detour task in which teams learned how to play "Waltzing Matilda" on which instrument?

Ending off Leg 13, five teams split between two Detour tasks in Belize City and raced to the Baron Bliss Lighthouse to dodge elimination. In 'Heat', teams were required to eat twenty-five hot meat pies at Dario's Meat Pies, sealing their hot pots between each pie or, else, being forced to restart the task. In 'Beat', however, teams learned to play "Waltzing Matilda" on steelpans, performing it with accompaniment from other players.

Heath and Toni and Chelsea and Jamus completed 'Heat' while Pako and Mori, Flick and Gabby, and Angel and Frankie completed 'Beat'.
8. Playing pok-a-tok for a Detour task in Belize (in Leg 14), teams had to score a goal using what?


Answer: Anything but their hands

Reaching the ruins at Cahal Pech in San Ignacio, Belize, teams had to pick either 'Score' or 'Solve', and most racers chose the former. For this task, they had to participate in a game of pok-a-tok in which they had to hit a ball into a raised hoop to score a point.

While one team member tossed the ball, the other would have to hit it in using any body part except their hands. In 'Solve', meanwhile, teams had to complete a logic puzzle using Mayan numbers, spinning wood blocks to get the proper solution.
9. In Caye Caulker in Leg 15, which team participated in a soca dance for the 'Twerk It' Detour option?

The four teams completing the latter task were all teams who had been sidelined in prior legs by COVID-19 isolation while the four doing the former hadn't had that break from the race.
10. Leg 17 saw the race's only Double U-Turn. Was it before or after the Detour task in Mérida, Mexico?

Teams raced out of a Virtual Pit Stop in Sotuta de Peón, Mexico and headed straight to Palacio Municipal de Mérida to find the only Double U-Turn of the race, and this one forced the first two teams to reach it to U-Turn anyone behind them. It's because of this that Pako and Mori chose to U-Turn Lauren and Steph while Heath and Toni chose to U-Turn Tiffany and Cynthia.

It meant the former went back to complete the 'Cactus' Detour while the latter went back to finish 'Chorus'. Neither team was eliminated.
Source: Author kyleisalive