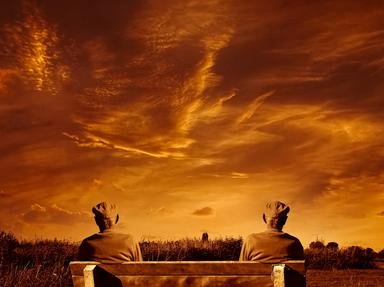 Is There an Italian-American in the House? Quiz

Many TV shows feature a character who is an Italian-American. Can you match the character with the correct TV show?

George Louis Costanza was played by Jason Alexander. He was a main character on the "Seinfeld" comedy series which ran for nine seasons after its 1989 premiere. George's parents were Frank and Estelle Costanza, who were described by Jerry as "psychopaths" and credited with providing George a dysfunctional childhood. Frank was described in the show as Italian-American. George was a short, bald man, slightly round in the middle. He always seemed to have a chip on his shoulder. Along with his insecurities, George focused on sex, was lazy, and quite neurotic. He often provided humor with his embarrassing antics.

The American sitcom starred stand-up comedian Jerry Seinfeld. The core characters were Jerry's neighbor Cosmos Kramer, childhood and best friend George Costanza, and ex-girlfriend Elaine Benes. Each episode was about every-day life. There was no real theme to the series, just episodes about funny things that happen every day.

Portrayed by Estelle Getty, who won a Golden Globe Award and a Primetime Emmy Award for her performance, Sophia Petrillo is one of the four titular "Golden Girls" in the successful sitcom. The character appeared in all seven seasons of the show (14 September 1985 - 9 May 1992), and also in the spin-offs "The Golden Palace" and "Empty Nest". As a whole, Getty played Sophia's character for 10 years.

Born in Sicily as Sophia Grisanti, Sophia is depicted as a feisty woman with a sharp tongue and a colourful past; somewhat at odds with her stereotypical, white-haired "old lady" appearance. Though always ready to criticize her roommates - one of whom is her divorced daughter, Dorothy Zbornak (Bea Arthur) - for their shortcomings, she cares deeply for them, and views Rose Nylund (Betty White) and Blanche Deveraux (Rue McClanahan) as surrogate daughters. She is also strongly attached to her Sicilian roots, which include her firm belief in the power of curses, and a possible involvement with the Mafia. A keen teller of tall tales, Sophia claims to have known many famous people (some of them intimately), and even to have been present at the infamous St Valentine's Day Massacre in 1929.

Interestingly, though Sophia was the oldest of the four "Golden Girls", Estelle Getty was one year younger than Betty White and her "daughter" Bea Arthur.

LadyNym of Phoenix Rising's Red Crew thinks that Sophia sounds like a lot of fun.
3. Everybody Loves Raymond

Actress Doris Roberts played the role of Marie Janella Barone on "Everybody Loves Raymond". She was the matriarch, or "Queen Marie" as her son Robert called her, of the Italian-American Barone family. Marie's core family unit was her husband Frank, oldest son Robert and youngest Raymond. Marie's character was sassy, nosy, over-bearing, manipulative, and absolutely loved her family. Frank was the only one in the family not afraid of Marie.

The American television series premiered in September 1996 and ran for nine seasons. The show's star was stand-up comedian Ray Romano. He played the part of Raymond Barone, a sportswriter and Marie's youngest son (her favorite). The show was set in Long Island, NY where Raymond and his wife, Debra, lived across the street from Marie and Frank (and Robert in the early seasons).

Doris Roberts won Primetime Emmy Awards for "Outstanding Supporting Actress in a Comedy Series" in 2001, 2002, 2003, and 2005 for her role in "Everybody Loves Raymond".

Whenever a solid belly laugh is needed, jaknginger knows she can find one with "Everybody Loves Raymond".
4. Happy Days

Player pusdoc of Phoenix Rising's Red Crew stopped watching classic TV before it jumped the shark.
5. Who's the Boss?

"Who's The Boss?" was a gentle but very popular sitcom that ran from 1984-1992. The premise was a former baseball star, widower Tony Micelli (Tony Danza), moved out of Brooklyn with his pre-teen daughter Samantha (Alyssa Milano) into suburban Connecticut to be a live-in housekeeper for Angela Bower (Judith Light) and her young son Jonathan (Danny Pintauro). Katherine Helmond as Angela's mother, Mona, provided a contrasting role (to Angela's buttoned-down self-controlled advertising executive) as a sexually progressive free spirit.

The title points to a role reversal between Tony and Angela. Angela was the breadwinner (ie goes out of the house each day to go to work) while Tony (although he and Angela were never a couple) stays at home and takes care of the household and the children, Samantha and Jonathan. The show dismissed the stereotype of Italian-American males as macho, boorish, and self-interested. Tony was portrayed as a sensitive, intelligent, character yet maintained an athletic and streetwise persona.

The show resisted the urge for them to be married off in the finale. Indeed, both principals were vehemently against this. While the show was peppered with hints about their attraction to one another, they actively avoided development in this area, and settled for comfortable friendship, but still relied on each other for emotional support.

This question was written by 1nn1, who is no longer the Boss.
6. Orange is the New Black

She is involved in a sexual relationship with another inmate in the first episode, but she ends this as she doesn't want to continue to betray her fiancé, Christopher, describing herself as a hopeless romantic. In later episodes, we discover that Christopher is actually a guy she dated once and subsequently stalked, even going so far as to put a bomb under his girlfriend's car. Despite this aspect to her, her bubbly, positive persona means she is used as the transport driver for the prison and is the welcome 'tour guide', often the first person new inmates come into contact with.

She styles her looks on her idol, Natalie Wood, and manages to create smoky eyes and red lips with coffee-ground eye shadow and left-over lipstick; added to her vintage 50s waves hairstyle, she cuts a cute glamourous figure.

Red Crew's smpdit believes that black is the new black.
7. The Sopranos

Portrayed by Lorraine Bracco, Jennifer Melfi is one of the key characters in TV series "The Sopranos", aired on HBO for six seasons (10 January 1999 - 10 June 2007). She is the psychiatrist the series' protagonist, Mafia boss Tony Soprano (James Gandolfini), starts seeing after suffering a panic attack. David Chase, the show's creator, was inspired to create Jennifer's character by his own psychiatrist. Chase had originally wanted Bracco to portray Carmela, Tony's wife, but Bracco was more attracted to the more challenging role of Dr. Melfi, and talked Chase into giving her the role.

An Italian-American with roots in Southern Italy (her father's family is from Caserta, north of Naples), Jennifer is an elegant, good-looking woman, a successful professional with an upscale lifestyle. Divorced from her husband (with whom she has a son), she is also undergoing therapy to deal with a drinking problem. Throughout the series, a strong current of attraction between Jennifer and Tony is heavily implied, though neither of them ever acts upon it.

Though Tony introduces himself as a waste management consultant, Jennifer is aware that he is a mobster. Her professional involvement with Tony puts Jennifer in danger on a number of occasions, as his rivals fear she might be used as a witness against them. In season 3, Jennifer is attacked and raped by a young man, but - in spite of her burning desire for revenge - she refrains from telling Tony about the rape. In the series' penultimate episode, "The Blue Comet", she decides to put an end to her sessions with Tony, as she believes those sessions give a boost to the mobster's sociopathic personality.

LadyNym of Phoenix Rising's Red Crew analyzed this question carefully before putting it into the quiz.
8. Rizzoli and Isles

Played by Angie Harmon in American crime TV series, "Rizzoli and Isles", Jane Rizzoli is one of the titular characters, a detective for Boston Police Department. She works alongside Dr Maura Isles (Sasha Alexander), who is the Chief Medical Examiner. The pair become best friends as well as being a formidable team, despite having vastly opposing personalities.

Jane is a strong independent character, very assured and capable. She has a younger brother who is also a policeman, and a very protective Italian-American mother who finds it hard to understand Jane's life choices and is continually trying to get her to settle down, despite all evidence showing that Jane doesn't have a major interest in doing so.

Jane encounters serial killer Charles Hoyt, alluded to as 'the Surgeon' whilst trying to save someone from his clutches, but he overpowers her and pins her to the floor using scalpels through her hands. The experience is something that often surfaces. She chooses to change partners, thinking that someone who had to save her from that situation would not be able to trust her abilities. She is someone who continually tries to win and maintain respect.

Red Crew's smpdit read the books by Tess Gerritsen that the show was based on and enjoyed them.
9. The Commish

Anthony Joseph "Tony" Scali was "The Commish". The American television series ran for five seasons in the early 1990s. Tony was the commissioner in a small town in NY after being a detective with the NYPD. At the age of 38, he was the youngest police commissioner in the US. The character was based off real-life Anthony Schembri. He was to son of an Italian immigrant and was the 30th Commissioner of New York City's Department of Correction.

This show had a different edge to it. It was not solely about crime and violence; it wove humor and family issues into each episode. Oddly enough and unfortunately so, 2010-2020s aren't the only decades with social issues such as homophobia, illegal immigration and racism. "The Commish" dealt with those same issues during its run in the 1990s.

Michael Chiklis played the part of Tony Scali. He went on to play LAPD Detective Vic Mackey on "The Shield" and Nathaniel Barnes in "Gotham" among other tv roles. He also was "The Thing" in two "Fantastic Four" films.

Jaknginger of Phoenix Rising's Red Crew added this question to the team quiz.
10. Laverne and Shirley

Actor Phil Foster (birth name Fivel Feldman) portrayed Laverne's father Frank DeFazio on 148 episodes of "Laverne and Shirley". The storyline had his wife dying when Laverne was 12, so Frank was the single parent for many years, and also took Shirley under his wing. He owned the Pizza Bowl when the series started, but when the gang moved to Southern California in season 4, he opened Cowboy Bills in Burbank.

Foster was recommended for the part by Garry Marshall, who was an old friend and knew him from prior work with Joey Bishop. Garry was of course brother to Penny Marshall, who portrayed Laverne.


Other Destinations
Explore Other Quizzes by smpdit