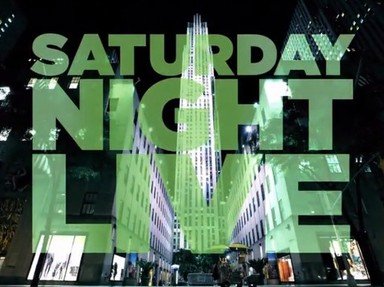 Kate McKinnon was a popular cast member on the sketch comedy television show "Saturday Night Live" from 2012 through 2022. This quiz celebrates her career and characters on this show.

Doctor Anthony Fauci served as the National Institute of Allergy and Infectious Diseases director during the Covid-19 pandemic. Kate McKinnon impersonated Anthony Fauci. The character discussed such topics as the Omicron variant, masks and the holidays.
2. Kate McKinnon played a Russian lady who was unhappy with the struggles in her village. What was the name of this character?

Olya Povlatsky was a Russian woman who voiced her opinions on Russian current events during the "Weekend Update" sketches. She often compared these events to the outrageous struggles she faced in her home village. This character was played by Kate McKinnon.
3. Kate McKinnon impersonated United States Supreme Court Justice Ruth Bader Ginsburg. At which 2016 political event did this character deliver her "Gins-Burns"?

The 2016 Republican National Convention was held in Cleveland, Ohio from July 18 through July 21. A special edition of "Saturday Night Live's Weekend Update" sketch was held from the venue on July 20, 2016. Kate McKinnon's Ruth Bader Ginsburg character joined the anchors. The character delivered some of her special "Gins-Burns" insults towards Chris Christie and certain celebrities.
4. Kate McKinnon played a which character who was questioned about her encounters?

Kate McKinnon played a 27 year-old woman named Colleen Rafferty. This character appeared in scientific panels with two of her friends. The three friends recounted their experiences of their shared paranormal events. These events included being abducted by aliens, having near-death experiences, discovering that Santa Claus is real, being visited by ghosts and discovering that time travel is possible. Colleen Rafferty went through a different, more traumatic experience during event than her two friends.
5. Kate McKinnon's Hillary Clinton character performed which song during a cold open of a 2016 "Saturday Night Live" episode?

On November 12, 2016 episode of "Saturday Night Live", Kate McKinnon's Hillary Clinton character opened the show with a solo performance of the song "Hallelujah" by Leonard Cohen. This was the first "Saturday Night Live" after Hillary Clinton's loss in the 2016 Presidential election. Musician Leonard Cohen had died earlier in the week.
6. During a sketch, Kate McKinnon once asked "what still works" in America. What was the answer to her question?

During the January 30, 2021 episode of "Saturday Night Live", Kate McKinnon attempted to figure out "what still works" in America during the show's cold open. She discussed the government, the stock market, social media, the vaccine rollout and Tom Brady. She eventually realized that the answer to the question is that "almost nothing" works.
7. Kate McKinnon parodied which celebrity's Calvin Klein ad?

Kate McKinnon appeared as German Chancellor Angela Merkel on multiple "Weekend Update" sketches. This character would have conversations with the weekend update anchors. During these conversations, the character would express her crush-like fantasies for Barack Obama.
9. Kate McKinnon played a doctor during a "Weekend Update" sketch with Colon Jost. What was the name of this doctor?

Kate McKinnon debuted her Doctor Wayne Wenowdis in 2020 during a "Weekend Update" segment. This character was a strangely accented middle-aged medical doctor who interacted with Colin Jost. This character served as "Weekend Update"'s resident medical expert who replied Josts's statements with the phrase "We know dis". The segments always ended with Kate McKinnon breaking character to address her anxieties regarding the COVID-19 pandemic.
10. Kate McKinnon impersonated which former New York City mayor and lawyer?