Behind every dictator, there is usually a wife wielding considerable power. This quiz looks at some famous, or infamous, First Ladies.

Quiz Answer Key and Fun Facts
1. A dictator's wife said "When they opened my closets, they only found shoes - not skeletons. That's why I'm still here." Who is/was she?

Imelda Marcos, wife of Philippines dictator, Ferdinand Marcos, was famous for her collection of shoes. She is said to have possessed over 3000 pairs of designer shoes, including a pair of battery-powered sling-backs that twinkled when she danced.
2. Another dictator's wife with a passion for shoes is the wife of president/dictator Robert Mugabe of Zimbabwe. What is her first name?

While millions of Zimbabwe citizens do not own any shoes, Grace Mugabe spends thousands of dollars on Ferragamo designer shoes because, she says, "I have narrow feet and Ferragamos are the only shoes I find comfortable". Grace's international shopping sprees are legendary.
3. Which Andrew Lloyd Webber/Tim Rice musical was based on the life of the wife of South American dictator?

The musical "Evita" was based on the life of Eva Peron. Eva's husband, Juan Peron, was president of Argentina from 1946 to 1955, and then again from 1973 until his death in 1974. Eva was a very influential First Lady. She died in 1952 at the age of 33 from uterine cancer. "Evita" opened on Broadway in 1978 and was made into a film in 1996 starring Madonna in the title role.
4. This dictator's wife was married for less than 24 hours before she and her husband committed suicide. Who was she?

Eva Braun had been Hitler's mistress for twelve years. They married on April 29, 1945, in an underground bomb shelter in Berlin. The next day, they committed suicide as the Allies closed in. Hitler's aides burned their bodies with gasoline.
5. This dictator's wife built a lavish palace to live in which is reputed to be the second largest building in the world (after the Pentagon). Who is/was she?

Elena Ceausescu oversaw the building of the opulent palace in the Romanian capital of Bucharest. However, she did not get to live in it for very long. On Christmas Day, 1989, Nicolae and Elena Ceausescu were shot by firing squad for crimes against the state.

At a hastily convened trial prior to their execution, Elena tried to claim that she and her husband lived "in a normal apartment, just like every other citizen". She claimed, "...we had no palaces. The palaces belong to the people." The prosecutor replied "You are a very foolish woman".
6. Which wife of a Chinese dictator was known as "the white-boned demon"?

Jiang Qing, also known as Madame Mao, exerted almost as much power as her husband. In 1980 she was tried for treason and was initially sentenced to death but was later placed under house arrest. In a nationally televised court appearance, she screamed "I was the dog of Chairman Mao and when he said bite, I bit". She hanged herself in 1991.
7. President Suharto and his wife ruled which Asian country for over thirty years?

President Suharto ruled Indonesia from 1967 until he was forced to resign in May 1998. He and his wife used their power to build a personal fortune estimated at $45 billion by his successor, Habibie. Suharto's wife, Siti Hartinah (also known as Ibu Tien) was nicknamed "Mrs. Tien (Ten) Percent" because of the cuts she took on government contracts and business deals.
8. Some historians claim that Alexander the Great was homosexual. Certainly, he did not have the reputation for womanising that other great dictators and conquerors have had, however, he did marry at least once. What was his wife's name?

There is evidence that Alexander the Great had a long-term intimate relationship with his childhood friend, Hephaestion. In 329 BC, Alexander conquered Balkh in Bactria (then eastern Persia/Iran, now northern Afghanistan). He killed the King of Balkh and married his daughter, Roshanak (commonly known as Roxanne). Roxanne accompanied Alexander on future campaigns and bore his only son and heir.

However, just before the birth, Alexander died at the age of 33 from a fever, possibly malaria. Roxanne and her son were subsequently hunted down and killed by his enemies.
9. This ancient Roman dictator's wife was allegedly a nymphomaniac who publicly committed bigamy by marrying another man and conspiring with him to kill her husband. What was the name of this wife?

Messalina was the Emperor Claudius's third wife. When news of Messalina's treachery was revealed to Claudius, he offered her an honourable death by suicide but apparently she refused, or was unable, to do this so he had her executed. According to Suetonius in "The Twelve Caesars", Claudius forgot that he had her executed: "Claudius' scatter-brainedness and short-sightedness ... were to be marvelled at.

After executing Messalina, he went in to dinner and presently asked 'Why is she not here?'"
10. This ancient Roman dictator's wife allegedly killed her husband with a poisoned mushroom in order to put her son on the throne? What was the name of this wife?

Poor Claudius did not have much luck with his wives! Agrippina was both his niece and his fourth wife. Agrippina murdered Claudius so that her son Lucius (known as Nero) could become ruler of Rome. Nero in turned murdered Agrippina because he found that she tried to rule through him and he was tired of her interference.
Source: Author MotherGoose 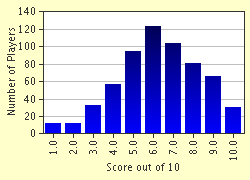