Run from Tyrants and Dictators! Quiz

Remember that one man's tyrant can be another man's hero. Here's a look at just a few of my favourite tyrants!

Roderigo Borgia was actually born Roderigo Lancol, in Spain 1431. His mother, Isabella Borgia, was the sister of Alfonso Borgia, who later became Pope Callixtus III.
In many ways Roderigo Borgia does appear to have been a bad man. He helped to restore law and order to Rome and heard petitions from the population in weekly courts. However, his personal life was not very becoming for a Pope. He was involved in wild orgies and accused of having several illegitimate children.
Tales that he poisoned his enemies and had sexual relations with his daughter, Lucrezia, are no longer taken seriously by many historians.
2. Which Spanish Conquistador expedition leader conquered the Aztec Empire?

Hernando Cortes was born in western Spain in 1485. After briefly studying law he set off for the Americas. In 1511 he helped Diego Velázquez in the conquest of Cuba.
He then left for Mexico and the Aztec capital of Tenochtitlán. Initially, he was welcomed by the Aztec king, Montezuma II, but relations turned sour and the Spanish were driven out. He returned in 1521 and took Tenochtitlán, building Mexico City on the ruins. His cruelty to the native population, and Western diseases introduced by the Spaniards, caused the death of tens of thousands.
3. South African Prime Minister Hendrik Verwoerd was known as what?

Hendrik Frensch Verwoerd was born in Amsterdam, 1901 and moved with his family to South Africa in 1903.
He became Prime Minister in 1958. Three years later South Africa left the Commonwealth and became a Republic.
Verwoerd believed that contact between different racial groups hindered their evolution. He promised that tribal nations would be given equal political rights in their new homelands. However, in reality the South African government had a strong influence in what went on even when the homelands became independent and living standards in the homelands were wretched.
The repressive policies of apartheid caused strikes, protests and riots. Verwoerd responded with harsher laws, bans and arrests.
In 1966 he was assassinated by Dimitrios Tsafendas.
4. Who led the Khmer Rouge from 1963 until 1998?

Saloth Sar (Pol Pot) was born in central Cambodia in 1925. He formed the Khmer Rouge, which consisted mainly of teenage peasants, and in 1975 on the 17th of April he took Phnom Penh, the capital of Cambodia. Over the next four years around a quarter of Cambodians were to die under his rule. Cities were evacuated and the inhabitants sent to rural farms where they were forced to work an 18 hour day on next to no food. These places became known as "The killing fields".
Torture and attacks on ethnic groups were commonplace.
In 1979, Vietnam brought an end to his rule. He hid in the jungles of southwest Cambodia until 1997. The Khmer Rouge carried on to be recognised by the United Nations, rather than the new Vietnamese-backed government.
5. Which of these men was an influential figure in the French revolution?

Robespierre was born in 1758 and trained to be a lawyer. In 1792, Robespierre was elected first deputy for Paris to the National Convention which put the king on trial and declared France a republic.
He was also a prominent member of the 'Committee of Public Safety' which began to eliminate all those considered to be enemies of the new republic, including Georges Danton a well known revolutionary.
His ruthlessness was his downfall and in 1794 he suffered the same fate he had handed out to others. He was executed by the guillotine.
6. The bloodthirsty Romanian, Vlad Tepes, was the inspiration for which literary character?

Prince Vlad III ruled Wallachia (in southern Romania) in the 15th century.
He killed thousands of men, impaling them on spikes. His reputation for cruelty earned him the name Vlad Tepes, which in English means Vlad the Impaler.
To Romanianis, however, he was seen as a hero, fighting to keep the Turks out of Romania.
7. Who took over as president of Chile in 1973 after a military coup ousted the democratically elected government ran by Salvador Allende?

Pinochet and his government are thought to have had around 30,000 people tortured and had over three hundred killed. Many political opponents simply disappeared.

He died in 2006 leaving 300 criminal charges against him behind including human rights violations and embezzlement.
8. Who was born in 1530 and became the first Russian leader to be crowned 'Tsar of all Russias'?

Ivan IV transformed Russia into an Empire to be reckoned with. His reign saw the conquest of Sibera, Astrakhan and the Khanate of Kazan.
He was a ruthless leader, encouraging his new militia to burn, loot, rape and torture in his name.
Ivan also had a terrible temper and some believe he was prone to bouts of mental illness. In 1582 he killed his eldest son and heir, Tsarevich Ivan with an iron rod.
9. Which German SS officer was known for his experiments on twins?

Josef Mengele was born in 1911 and became infamous for his medical experiments in Auschwitz in WWII. He was nicknamed "The Angel of Death" and carried out unspeakable experiments on the prisoners of the camp.
He hoped, by experimenting on twins, to understand heredity in an attempt to help Aryan women give birth to blond, blue eyed twins!
He escaped being tried as a war criminal by fleeing to Brazil, where he died in 1979.
10. What name did Romans give to Attila the Hun?


Answer: The Scourge of God

The Huns were an aggressive, nomadic tribe who swept westward through Asia and Europe conquering everything in their path.
Attila led the Huns in the 5th century and he played decisive role in the fall of the Roman Empire.
He died in AD 453, reportedly from a nosebleed on his wedding night.
Source: Author playmate1111 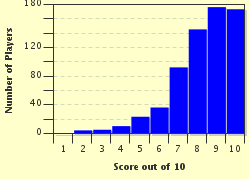 
Other Destinations
Explore Other Quizzes by playmate1111