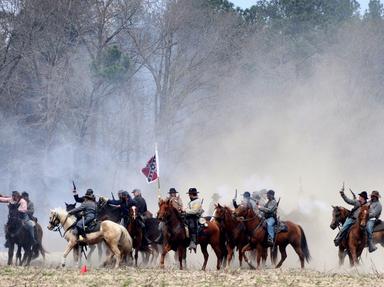 A new quiz every hour! Over 560 questions in rotation. Recent Scores

The Battle of Fredericksburg

15 questions
Tough, 15 Qns, F6FHellcat, Mar 14 07
Battles like Gettysburg, Shiloh, Bull Run, and Antietam get all the attention. But they were not the only battles to be fought during the war. This quiz is about some of the battles and skirmishes folks are unlikely to learn about in school.
Tough
F6FHellcat
Mar 14 07
1347 plays
3.

The Battle of the Wilderness

Match the Opposing Commanders to the Battle

15 questions
Average, 15 Qns, Cleburne, Jul 24 16
Do you know the commanders of these 15 important Civil War battles? I'll give you the Confederate and Union commanders, and you place the appropriate answer in the box. Good luck!
Average
Cleburne
Jul 24 16
294 plays
5.

10 questions
Average, 10 Qns, Ramses22, May 07 08
This is a quiz about Civil War battlefields. Some are well known, others obscure. I will give the State and some information on the battle give me the name of the battle.
Average
Ramses22

15 questions
Average, 15 Qns, DarthNefarus, Jul 10 06
My second in a planned series of Civil War battle quizzes. This one is on the Battle of Shiloh.
Average
DarthNefarus
Jul 10 06
2130 plays
7.

10 questions
Average, 10 Qns, Jack212, Nov 30 06
In 1862, during the Civil War, the Confederate army invaded the north for the first time. Historians have named this invasion the "Maryland Campaign". Several important events happened during this time period. Students of the Civil War might find this
Average
Jack212
Nov 30 06
2055 plays
8.

Battles of the Civil War: Name The Battle

Battlefield Nicknames 10 questions
Difficult, 10 Qns, supermanbhc, Feb 18 09
I will supply the nickname of a *part* of a Civil War battlefield and you work out the name of the battle.
Difficult
supermanbhc
Feb 18 09
1815 plays
10.

Seven Days' Battles/Peninsula Campaign 10 questions
Average, 10 Qns, DarthNefarus, Jul 11 06
A quiz on the series of battles fought in the spring of 1862 on the Virginia Peninsula.
Average
DarthNefarus
Jul 11 06
1044 plays
13.

Early Battles of the Civil War 10 questions
Tough, 10 Qns, daver852, Feb 17 16
I will tell you the name of a battle of the American Civil War that took place between 1861 and 1863, followed by four statements about it. Three are incorrect, and one is true. You need to identify the true statement.
Tough
daver852

The Farms of Antietam: Their Role In The Battle 10 questions
Tough, 10 Qns, stephgm67, Dec 13 16
September 17th of 1862 was the date of the bloodiest one-day battle in American history. It was the Battle of Antietam (known as Sharpsburg in the South). Discover some little-known details about the farmsteads on the battlefield during that fateful day.
Tough
stephgm67

Battle of Pittsburg Landing, Tennessee 10 questions
Tough, 10 Qns, OldBedfordNo1, Aug 12 09
The Battle of Pittsburg Landing which occurred on April 6-7, 1862 was one of the worst battles in the western theatre. More casualties were sustained during this two day battle than in any other battle previously fought in North America.
Tough
OldBedfordNo1
Aug 12 09
471 plays
18.

It's Old Jack, or a Rabbit: Valley Campaign 10 questions
Tough, 10 Qns, DeepHistory, Mar 25 14
This quiz is about Stonewall Jackson's Valley Campaign, one of the most pivotal in the American Civil War. Good luck and have fun!
Tough
DeepHistory

Chancellorsville: What Went Wrong? 10 questions
Tough, 10 Qns, Teej417, Feb 14 03
Chancellorsville is considered Lee's best battle. But what happened to Hooker's plan that made it fail so badly? Take this test and see the other side of the story.
Tough
Teej417
Feb 14 03
2199 plays
22.

Ready, Fire, Aim! 10 questions
Difficult, 10 Qns, DeepHistory, Feb 22 14
This quiz deals with one of the last but not least Civil War campaigns: the Siege of Petersburg. Of course, it is only the first part. Good luck and have fun!
Difficult
DeepHistory