And Then There Were None Trivia Quiz

If you think modern Australia is the land of strange animals, wait until you meet some of the extinct megafauna of this unique land.

Quiz Answer Key and Fun Facts
1. Procoptodon goliah is the scientific name for the largest kangaroo ever to have lived (as far as is currently known). What is the common name for this Pleistocene giant, about half again as large as the largest contemporary kangaroo, which was distinguished by its flat face and forward-pointing eyes?

The giant short-faced kangaroo stood about 3m (10ft) tall and weighed about 230 kg (510 lb). Each foot had a single large toe, and each forelimb had two over-sized fingers with claws, presumably used to grab branches. They are thought to have become extinct, probably due to human activities, between 50,000 and 18,000 years ago. Fossils have been found at a number of sites, including Naracoorte SA, Menindee NSW and Darling Downs QLD.

Their closest living relative is thought to be the banded hare-wallaby.
2. The largest monotreme (egg-laying mammal) so far discovered was Zaglossus hacketti, a resident of Western Australia. About the size of a sheep, it has been tentatively placed in the same genus as which of the following animals with a long nose and spines?

Zaglossus hacketti was a sheep-sized echidna living during the late Pleistocene era in Western Australia. It is known only from a few fossil bones, so its classification is somewhat tentative, but it has been placed in the same genus as the 3 living species of echidna found only in New Guinea, the long-beaked echidnas.

The extinct robust echidna also belongs to this genus. The short-beaked echidna has only one living species, which is found over most of Australia and New Guinea.
3. Quinkana was a genus of large reptiles whose remains were found in Bluff Downs in Queensland. As a land-dwelling crocodile, it had several features that are quite distinct from its modern relatives. Which of these is NOT one of these distinguishing features?


Answer: It had a long tail on which it could balance to reach tree-dwelling prey.

Quinkana (there were several species) were terrestrial crocodiles some of which were as large as 5-7m (16-23ft) in length, making them second in size only to the giant monitor lizard, and one of the most successful land-based predators in Australia. Because they could not kill their prey by holding it underwater (the strategy of aquatic crocodiles), they had serrated teeth designed for cutting flesh in order to kill.
4. Diprotodon optatum was the largest species of diprotodontid of which fossils have been found. It resembled a contemporary marsupial which is known for its burrowing capacity and stocky, strong build. What is this relative, which can be either common or hairy-nosed?

Diprotodons were large and mobile marsupials found in many parts of Australia between about 28.4 million years ago and 11,000 years ago. D. optatum was roughly the size of a hippopotamus, and resembled the modern wombat. It was the largest marsupial yet known. Given the damage a wombat can do to a car that is unlucky enough to be involved in a collision with one, it's a good thing drivers don't have to handle wandering diprotodons on dark country roads!
5. Sarcophilus harrisii is the only living relative of the carnivorous marsupial Sarcophilus laniarius which became extinct during the Pleistocene epoch (between 2.588 million to 12,000 years ago). Which Looney Tunes character is supposed to be a relative of S. laniarius?

The Tasmanian devil is the only remaining member of this genus. They became extinct on the Australian mainland over 3000 years ago, and are now only found on the island of Tasmania. They became a protected species in 1941. In May of 2009 they were declared an endangered species due to the rapid spread of devil facial tumour disease, a non-viral parasitic cancer which appears to be spread through biting. S. laniarius was a larger version of this nasty-tempered, foul-smelling, anti-social, ferocious animal which is currently Australia's largest carnivorous marsupial.
6. Obduron dicksoni was a 60cm (2ft) long relative of an animal which was thought to be a hoax when the first specimens were taken to England. Which egg-laying aquatic mammal, whose males have poison spurs on their hind legs, is related to O. dicksoni?

The contemporary platypus is found in eastern Australia (including Tasmania), and is only about half the size of its ancestor, fossils of which were found at Riversleigh QLD. When European biologists first saw an example of an egg-laying, venomous, duck-billed, beaver-tailed, otter-footed mammal they were so amazed that many considered it must be an elaborate hoax.

Although traces of several platypus species have been found in the fossil record, there is only one living member of the platypus family.

Its genus name, Ornithorhynchus, is derived from a Greek word meaning 'bird snout', and its species name, anatinus, comes from a Latin word meaning 'duck-like'.
7. Varanus priscus (also sometimes classified as Megalania prisca) is a reptilian relative of over 20 modern species after whom an Australian band, known for combining rock music with social protest, took its name. What is the more familiar name for this genus?

All of these Australian bands are known for their socially-aware songs, but the only one named after an iconic Australian reptile is Goanna. Goanna is the Australian name for several species of monitor lizards, all of whom are carnivorous, and which feature prominently in many indigenous legends and folk tales. Varanus priscus may have been as long as 7 m (23 ft) and weighed close to a ton.

It seems to have disappeared about 40,000 years ago. The name Megalania prisca was chosen to mean 'ancient great roamer' - it is the largest terrestrial lizard known to have existed.
8. The Dromornithidae family were large flightless birds thought to have been more closely related to waterfowls than to the modern-day flightless birds such as emus and ostriches. Which of the following is the commonly-used (although distinctly unusual) nickname used by scientists when referring to Bullockornis planeii, a member of this family?

The 'Demon Duck of Doom' lived about 15 million years ago, standing about 2.5m (8ft) tall, and weighing up to 250kg (550lb). Many ornithologists believe the dromornithids to be related to ducks and geese. The shape of its skull and beak suggest that it may have been carnivorous. That, along with its size, led to its nickname.
9. Phascolarctos stirtoni was about a third larger than its contemporary relative, Phascolarctos cinereus. Which cute and cuddly-looking arboreal marsupial, often incorrectly referred to as a bear, is similar to P. stirtoni?

P. stirtoni, commonly known as the giant koala, lived in the Pleistocene, alongside P cinereus. It is not known why the larger species became extinct around 50,000 years ago while the smaller survived. Both appear to have occupied the same ecological niche.

The giant koala is the smallest of the animals ever described as Australian megafauna, and some consider it is really too small to fit that description, and that it should be called a 'robust' koala, not a 'giant' one.
10. Thylacoleo carnifex was a dominant Australian predator about 2 million to 46 thousand years ago. What nickname was given to these cat-like carnivores?

The marsupial lion was the size of a leopard, with a cat-like skull and large slicing pre-molars. It had hooded (retractable) claws on large semi-opposable thumbs, and massive forelimbs. These features have led scientists to the conclusion that it was almost certainly a carnivorous tree-dweller.

It also had a long muscular tail similar to that of a kangaroo, on which it could balance itself in order to free both front limbs for attacking prey. In 2002, eight complete skeletons of T. carnifex were found in a cave under the Nullarbor Plain, giving scientists a greatly-improved knowledge of the species.
Source: Author looney_tunes 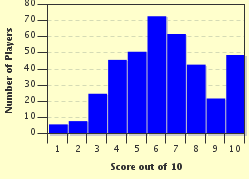 Related Quizzes
This quiz is part of series A Taste of Australia:

A sample of my quizzes with an Australian focus.


1. "We Can Be Heroes" - Phil Olivetti Average
2. Aussie Rules Mascot Melee Average
3. Scandals in Australian History Average
4. Eltham: Gateway to Melbourne's Green Wedge Average
5. And Then There Were None Average
6. Streets of Gold Average
7. How I Spent My Summer Vacation Average
8. VFL to AFL and On Easier
9. The Big One Average
10. Australia's Convict Heritage Average
11. The All-Aussie Bunyip Average
12. 9 for 10 from Down Under Easier