Mondo Animalia: Beginning with lions and ending with llamas, here are some surprising facts about animals, some familiar, some not so much! Many thanks to Kyleisalive for the Author Challenge.

Quiz Answer Key and Fun Facts
1. There was a time in pre-history when lions were the second most populous large land mammal on Earth, after humans. In which which geologic era did this occur?

In the Pleistocene Era, lions could be found throughout the world: in Africa, from Europe to India, and in the Americas from Canada to parts of South America. Evidence of this habitation includes fossils, sculptures and carved artifacts, and cave paintings. Several species of these animals are actually named "cave lions." Today, African lions are a vulnerable species and exist there only in certain reserves and national parks, and a small number of endangered Asiatic lions can only be found in the Gir Forest National Park in India.
2. Although there is evidence that guide dogs were used to help blind people as far back as the 16th century, it was not until after World War II that organized training for guide dogs was instituted.

The first formal training program for guide dogs was started in Germany while World War I was still in progress in order to aid in the rehabilitation of German soldiers who were blinded in combat during that war. As the need to help similarly-injured veterans was recognized in the US and Britain, training programs were also established in those countries in the early 1930s.

Interestingly, Labradoodles were purpose-bred in Australia in the late 1980s to combine the trainability of the Labrador retriever with the hypo-allegenic qualities of the standard poodle in order to develop a guide dog suitable for people and/or their family members who were allergic.
3. Which of these characteristics of bulls led to the selection of the color red for matadors' capes?


Answer: none of these; the characteristics of the bull were not a factor in the selection of red

Bulls are, for all intents and purposes, colorblind. The television program "Mythbusters" did a test in which a bull was brought into a paddock with mannikins, each holding a "cape" of a different color - one red, one blue, and one white. The bull in the test made only a perfunctory pass at the flags while they were still. But when the flags were waved or agitated the bull became quite belligerent and charged, leading to the conclusion that it was the violent movement, not the color, that excited the bull.

Red was probably chosen originally to mask the color of the blood shed by the bull during the "fight," and over the years it has become a traditional color, even in those more modern forms of bullfighting in which no blood is shed. Nowadays, bullfighting is less popular than in earlier days; thanks to the efforts of anti-animal cruelty groups.
4. Bald eagles cannot swim.

Although not quite ready to enter the Olympic trials, a bald eagle can and will swim, usually when it has caught prey that is too heavy for it to lift over water. In such cases, the eagle can perform a maneuver that resembles a combination of swimming and laborious low flight in order to drag the prey to a nearby bank, where it can feed.

This swim/drag tactic can pose a risk of drowning or hypothermia to the eagle.
5. Which of the following continents, now linked to many things equine, had never in its history had native horses until they were brought in by early explorers and settlers?

Indeed, no horse fossils have ever been unearthed in Australia. Horses originally arrived on the continent with the First Fleet in 1788, which brought English Thoroughbreds and Spanish horses. The horse emigrees had to be very hearty to survive the journey from Europe, so that those horses eventually bred in Australia became extra-hearty. Horses supported the exploration of Australia, worked its farms and livestock stations, and provided transportation in and to its developing settlements. Horse ancestors did exist in the prehistoric Americas, as shown by their abundant fossils, although they died out there by the end of the Pleistocene Era. Horses thus also had to be brought to those regions by early explorers.
6. What is the period of inactivity experienced by snakes in cold weather called?

Brumation is comparable to hibernation in mammals. It is essentially a survival response to the falling temperatures brought on by the approach of winter; and it may also be caused by the decreasing amount of daylight in that season. As snakes are cold-blooded animals, they are not able to compensate for falling temperatures in their environment.

They seek out a place to "nest" for the duration of the cold weather, such as a cave, a rock crevice, a burrow, or even under water. During this period, the snake's metabolism slows, it becomes lethargic, and it may not even move. Like mammals who hibernate, snakes may eat large amounts before brumation.

However, unlike hibernating mammals, who sleep continuously for the entire duration of the winter, snakes may stir during brumation long enough to drink water, which their bodies cannot store.
7. A cat can move each ear independently of the other one.

Cats' ears are magnificent. The 32 muscles in each ear (compared to six muscles in a human being's ear) enable the cat to listen directionally and to move its body in one direction while turning its ears the opposite way. Additionally, a cat's ears offer a visible symbol of its moods.

For example, a threatened or hostile cat will flatten its ears as a defensive maneuver; a cat ready for play will prick its ears up extra high!
8. What does the juvenile pinnate batfish have in common with the opossum?


Answer: both will "play dead" if threatened

The act of "playing possum" is in reality an involuntary response to stress, and as such it encompasses a variety of physiological signs: drawn back lips, exposed teeth, foaming at the mouth, half-closed eyes, a foul odor, and bodily stiffness; all of which can last for up to four hours.

The reaction is one that becomes more reliably automatic with age. Similarly, the young pinnate batfish will float on its side, resembling leaves or floating clumps of algae, in order to mislead predators. Another species of batfish, the tiera, has coloration and movement that resemble an ocean worm, the polyclad flatworm, whose bad flavor makes it repellant to predators.
9. There are nearly twice as many moth species as butterfly species.

Moth species outnumber butterflies by at least 8-to-1 and possibly by as many as 16-to-1. Other differences between moths and butterflies: moths are primarily active from twilight to dawn, butterflies are active in daytime; moths' antennae are like feathers, butterflies' antennae are slender filaments; moths have thicker bodies and often denser, even fluffy wings, while butterflies have slender bodies and finer-textured wings; moths rest with their wings spread out to their sides, butterflies rest with their wings folded above their backs; and moth coloration is brown, grey, white, or black, while butterflies are much more brightly colored.
10. Many animal mothers and their young can recognize each other by smell. But llamas go the animal kingdom one better with what kind of mother-to-baby-to-mother communication and recognition?

Llamas have the coolest scientific name ever: "Lama glama." Humming is a major form of llama communication; and all llamas hum throughout their lives to express a variety of moods from comfort to aggression. Mama llamas and their babies, called "crias," hum to each other from birth; and they can recognize each other and tell each other apart from other llamas by their unique humming sounds. Llamas are sometimes unjustifiably faulted for excessive and indiscriminate spitting.

In fact, llamas primarily spit at each other when necessary to establish dominance in their herds, and spit at people very rarely, usually only as a last resort when they feel threatened with no avenue of escape.
Source: Author shorthumbz 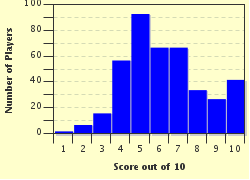