It's a Jungle Out There Trivia Quiz

How many of the following jungle creatures can you identify?

Quiz Answer Key and Fun Facts
1. Once known as a pygmy chimpanzee, this great ape makes its home south of the Congo River in the forests of the Democratic Republic of Congo. A close relative of humans and sharing much of our same DNA, which simian is it?

Until 1929, chimpanzees and bonobos were thought to be the same ape. Bonobos live in a peaceful, cooperative, and matriarchal society. Bonobos are omnivorous and semi-arboreal. They are also highly intelligent. Scientists have discovered that bonobos share the same patterns of neuron activity, called VENS, found in dolphins, whales, elephants, and humans.
2. The rainforests of Madagascar are home to the largest nocturnal primate. This odd-looking species of lemur is known as what?

This small creature looks more like a rodent than a primate. It's unusual for several reasons. It has one long middle finger and uses that finger to dig insect larvae from beneath tree bark. Completely nocturnal, this primate sleeps curled up on leaves in tree branches during the day and uses echolation to hunt for food at night.

The aye-aye has incisors that don't stop growing. This prevents its teeth from wearing down from all that bark chewing.
3. Of the five extant species of rhinos, one is native to the island of Borneo. The climate and dense forests of the island provide the perfect environment for this rhino. Which critically endangered species is it?

The Bornean rhino, or Eastern Sumatran rhino, can only be found on the island of Borneo. This species of rhino is much smaller than other species. These animals are herbivores, grazing on grass and foliage. The horns are what make rhinos so identifiable. The outer surface of the horns is made of keratin. Interestingly, if a rhino loses a horn it can grow another one.
4. The world's largest rodent can be found in the forests of Central and South America, with the exception of Chile. It's closely related to the guinea pig. Which rodent is it?

This is one big rodent! It can stand two feet tall and weigh from 70 to 140 lbs. Being an herbivore, the capybara eats only plants, both aquatic and terrestrial. Being semi-aquatic, lakes, rivers, and streams provide not only food but a sanctuary from land predators. The capybara is covered with reddish-brown fur. Facially it resembles a beaver but does not have a tail.
5. Of all the big cats, this one is the least likely to attack humans. It makes its home in the Brazilian rainforests and other South American countries. It's ranked as the third largest of all big cats. Which one is it?

Although the jaguar can be found in desert regions such as the southern U.S. and Mexico, it prefers the rainforests. In appearance it's bigger and more muscular than a leopard but behaves more like a tiger. Like the leopard, it is also covered in spots, even the ones that appear to be completely black.

The jaguar has few, if any, predators. Unlike the lion that travels in packs, the jaguar is solitary. As with all the big cats, meat is the primary source of food. The diet will include turtles, snakes, monkeys, rodents, and even horses.
6. Which resident of the Amazon rainforest, closely resembling and belonging to the same family as the alligator, is so dangerous it has few natural predators?

Both the caiman and alligator belong to the family Alligatoridae but there are some differences. Caimans are smaller in size. If you're brave enough or crazy enough to get up close, you will notice its teeth are longer and thinner than that of its relative. Also the septum between the alligator's nostrils is missing from the caiman.

The black caiman is the largest species of caiman measuring as long as 16 ft and weighing close to 2400 lbs. Their diet consists mostly of fish but can also include birds and reptiles.
7. With its round bear-like ears, this cute animal might be mistaken for a primate due to the fact that it has a long prehensile tail and likes to hang from tree branches. It is, in fact, related to the raccoon. Which rainforest dweller is it?

The kinkajou possesses some unusual characteristics. Its tail is unusually long compared to its body, allowing it to dangle from tree branches quite comfortably. It also has a five-inch long tongue which is used for grabbing fruit off trees or licking honey from bee hives. For that reason the kinkajou is sometimes referred to as "honey bear." Rainforests of Central and South America provide a comfortable home for the "honey bear."
8. If you live in the rainforests or tropical savannahs of Central and South America, dine on ants and other insects, and consider the sloth a close relative, which animal are you?

There are four species of anteaters: giant, tamandua( two species) and silky. The biggest species is the giant anteater which can measure up to six feet long and weigh close to 90 pounds. The silky is the least common of the four species. It's well camouflaged by its silky, yellow coat.

The anteater has poor eyesight and depends on its sense of smell to locate food. After digging into ant hills with its sharp claws, the anteater can then utilize its long snout to retrieve prey.
9. This species of gibbon, or lesser ape, is the largest and darkest of all the species. With exceptionally long arms and unique throat sac, which gibbon is it?

The inflatable throat sac, which can inflate to the size of the ape's head, enables it to produce a very loud call which can be heard two miles away, even in the dense rainforests of Malaysia and Sumatra. The siamang is covered in dark, hairy fur. It's sociable yet forms a close family unit.

The male and female mate for life. As an omnivore, the saimang dines on plants and small mammals. As is the case for all lesser apes, it has no tail.
10. There is a type of nocturnal bird found in lowland forests of Central and South America that is so well camouflaged that chances are you could pass right by it and not even know it's there. Known for its haunting call, what is this bird?

The potoo is a passerine bird related to the nightjar. There are several different species of potoo, each with a slightly different coloration. These birds are nocturnal, sleeping in tree branches during the day and searching for insects to feed on at night. The bill is small and hooked but opens widely, well suited for capturing flying insects.
Source: Author nmerr 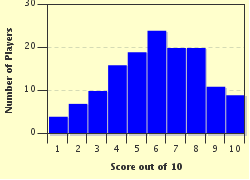 Related Quizzes
1. Pacific Islands: Two Legs, More or Less Easier
2. Know Your North American Carnivores Easier
3. The World of Animals Average
4. Name the Country From Its Critters Tough
5. Animals at the Pyramid of the Sun Average
6. More Than Kangaroos & Koalas: The Fauna of Oceania Average
7. In Which Country Would You Find this Mammal? Easier
8. Surfing the Sand Dunes Average
9. Wild in New Guinea Average
10. Geo-Zoo - Missing Links by Region Tough
11. The World of Animals [2] Average
12. What Antipodean Animal is This? Average