In Which Country Would You Find this Mammal? Quiz

Each one of these mammals is endemic to a particular country, in other words that is the only country in which it can be found in the wild. Can you match each mammal with its country?

The Amur lemming is endemic to Siberia in northern Russia. They feed on mosses, grasses and insects, and, due to a lack of natural predators, are not endangered.
2. Orkney vole

The Orkney vole is endemic to the Orkney islands in Scotland, UK. This vole is larger than other types of common vole, of which it is a supspecies.
3. Sumatran tiger

The Sumatran tiger can only be found in the wild on the Indonesian island of Sumatra. Its fur is darker than most subspecies of tiger, with broader stripes.
4. Riverine rabbit

Also known as the Bushman rabbit or hare, the Riverine rabbit is endemic to the Karoo Desert in South Africa. It is longer than most species of rabbit, with a distinctive black stripe on its cheek.
5. Patagonian opossum

The most southerly occurring of any marsupial, the Patagonian opossum lives in the Patagonian steppe of Argentina. It has a varied diet, including mice, birds, fruit and insects.
6. Giant panda

One of the most familiar of all animals, and found in zoos worldwide, the giant panda only exists in the wild in mountainous central China. A member of the bear family, the vast majority of the panda's diet consists of bamboo shots, although it will occasionally eat eggs, fish and meat.
7. Hopi chipmunk

The Hopi chipmunk is endemic to the USA, specifically the states of Arizona, Colorado and Utah. Its appearance differs from other chipmunks in its smaller size and lack of black stripes on its back.
8. Canarian shrew

The Canarian shrew is endemic to the Canary Islands, which belong to Spain. It feeds on insects and snails inside its main habitat of lava tubes.
9. Duck-billed platypus

One of the most easily-identifiable mammals in the world, the duck-billed platypus is endemic to the eastern states of Australia, plus the island state of Tasmania. One of only two egg-laying animals in the world, along with the echidna, its has venomous spurs on its ankles, which emit an extremely painful poison.
10. Lion-tailed macaque

The lion-tailed macaque is endemic to the Western Ghats, a mountain range that runs parallel to the southwest coast of India. Its name comes from the mane of silver-white hair around its head and the tuft on its tail. One of the smaller species of macaque, it has a varied diet which includes fruit, insects, seeds and fungi.
Source: Author Dizart 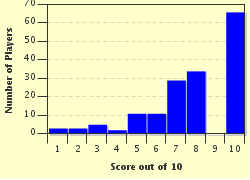 Related Quizzes
1. Pacific Islands: Two Legs, More or Less Easier
2. Know Your North American Carnivores Easier
3. The World of Animals Average
4. Name the Country From Its Critters Tough
5. It's a Jungle Out There Average
6. Animals at the Pyramid of the Sun Average
7. More Than Kangaroos & Koalas: The Fauna of Oceania Average
8. Surfing the Sand Dunes Average
9. Wild in New Guinea Average
10. Geo-Zoo - Missing Links by Region Tough
11. The World of Animals [2] Average
12. What Antipodean Animal is This? Average