What Antipodean Animal is This? Quiz

How good are you at identifying animals? These are are all native to Australian or New Zealand.

Quiz Answer Key and Fun Facts
1. What usually nocturnal animal is flightless and a national symbol of New Zealand?

The kiwi is endemic to New Zealand and is the only bird to have nostrils at the end of its beak. It has a highly developed sense of smell.
2. Another national symbol and strict herbivore, which animal is a bit of a bounder?

The term "kangaroo" refers to the larger members of the Macropodidae family, of which there are 4 species found in Australia. There are another 50 or so smaller macropods found in Australia and New Guinea. Macropod means "large foot". Smaller macropods include rock wallabies, wallaroos, tree kangaroos and the rat kangaroo. Kangaroos are the only large animal to move by hopping, but cannot move backwards.

They are also good swimmers.
3. The next animal is an onomatopoeic alpine flyer from New Zealand. Can you name it?

The kea is one of the few alpine parrots. Rated as one of the most intelligent birds in the world, its intelligence and curiosity have helped it to survive in the harsh alpine environment. Their forward behaviour around people is sometimes seen as endearing and sometimes problematic. They are now a protected species, having once been hunted for a bounty.
4. What carnivorous marsupial is now the largest marsupial carnivore in the world and is only found on this island formerly known as Van Diemen's Land?

The Tasmanian devil is a protected species only occurring on Tasmania. After the extinction of the thylacine, it is the world's largest carnivorous marsupial. Unfortunately devil facial tumour disease is now making this protected animal vulnerable to extinction.
5. What reptile from New Zealand has the lowest body temperature of all reptiles and can remain active at 5 degrees Celcius?

Loss of habitat and the Polynesian rat resulted in the extinction of the tuatara on mainland New Zealand. Captive breeding programmes and eradication of rat populations on some offshore islands seemed to have helped.

Its low body temperature means a slow metabolism and relatively long life span - "Henry", a tuatara at Southland Museum in Invercargill, is reported to have became a father in 2009 at the age of 111 years.
6. What is the world's smallest dolphin?

Found only on the west coast of New Zealand's North Island, there are less than 150 left and are at risk of extinction. Maui's dolphins are a sub-species of Hector's dolphins.
7. Which avian animal has the gift of laughter?

These terrestrial kingfishers are found in Australia and New Guinea. Sometimes known as the Laughing Jackasses of Australia, they are easily recognisable by their call which sounds like echoing human laughter. They are carnivores, eating lizards, snakes, small birds and mice. Fish does not form part of their diet despite being part of the kingfisher family.
8. What native nocturnal semi-arboreal marsupial of Australia was introduced into New Zealand in 1837 to start a fur industry but has since become a major pest?

New Zealand's vegetation has evolved without any natural defences to such animals and great damage has been caused as a result. Possums compete with New Zealand's native birds for food as well as eating their eggs and chicks. They are estimated to eat 20,000 tonnes of New Zealand's vegetation every night! Unlike in New Zealand, possums are protected in Australia.
9. What New Zealand beer ... I mean bird, a member of the honeyeater family, is usually first identified by its melodic call?

Featuring two voice boxes, this bird produces a collection of sounds ranging from bell-like notes to clicks, creaks, wheezes and cackles. The white tuft under its throat is an identifying feature.

And the beer reference? Tui is a well-known (in New Zealand, anyway) beer brand name.
10. What is New Zealand's sole surviving native owl?

Another native bird with an onomatopoeic name, the Maori name of ruru also reflects its call. The southern boobook is the Australian version and is slightly larger. The laughing owl is a native New Zealand bird believed to be extinct. The little owl is was introduced to New Zealand in the 20th century.
Source: Author suomy 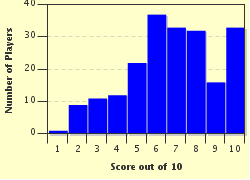 Related Quizzes
1. The World of Animals Average
2. Geo-Zoo - Missing Links by Region Tough
3. Know Your North American Carnivores Easier
4. Geo-Zoo - Other Missing Links Tough
5. Name the Country From Its Critters Tough
6. Where in the World?? Average
7. Mammals of the Holy Land Tough
8. In Which Country Would You Find this Mammal? Easier
9. The World of Animals [2] Average
10. It's a Jungle Out There Average
11. Wild in New Guinea Average
12. More Than Kangaroos & Koalas: The Fauna of Oceania Average