This second Geo-Zoo quiz brings up more habitats from around the Globe. Choose the 'missing link' and keep in mind that the animals listed in each question belong to the same geographical area.

The Western and Central African tropical rainforests are some of the largest remaining wild areas of the Globe. Unfortunately their size is shrinking with each passing year. To make matters worse, illegal logging, poaching and hunting are still problems which are not entirely taken care of.
2. Bobcat - Western Diamondback - Coyote - Black-tailed Jackrabbit - Gila Monster - ?

Unlike most habitats, the deserts are increasing in area. The hot days, cold nights and lack of water make survival hard for wildlife. The North American desert makes no exceptions, but a surprising number of animals have found a way to deal with the harsh conditions.
3. Condor - Flamingo - Llama - Alpaca - Vicuna - Velvet-purple Coronet -?

The Andes are the longest mountain range in the world. They are home to several species not otherwise found in South America. Large animals are pretty scarce but there is a great abundance of birds around the mountain lakes.
4. Himalayan Black Bear - Yak - Bhutan Glory - Snow Leopard - Bearded Vulture - Red Panda - (Yeti?) - ?

The Himalayan mountains form a massive natural barrier, inducing a major climate effect. While the north range has dry conditions, the southern foothills experience frequent rainfalls. The medium-level forests, along with the Tibet plateau house a great diversity of species, many of them unique throughout the world.
5. Magot - Wild Boar - Iberian Lynx - Nose-horned Viper - Egyptian Mongoose - Ibex - ?

The Mediterranean forests and scrubs (also known as "maquis") are suffering from the great expansion of urbanization and agriculture in this area. Today, only about 17% of the original 82% forest cover remains.
6. Polar Bear - Narwhal - Killer Whale - Arctic Tern - Walrus - ?

The diversity of species in the Arctic regions is proof that life may thrive anywhere. The polar regions are one of the best conserved habitats as the human influence is barely felt there.
7. Conger Eel - Pilot Whale - Lesser-spotted Dogfish - Cod - Mackerel - ?

The waters of the North Atlantic hide mollusks, great banks of fish and aquatic mammals like dolphins and whales. At the basis of this habitat's food web stands the plankton, an organic mass composed of billions of tiny plants and animals that float close to the surface of the sea.
8. Tapir - Anoa - Orangutan - Sun Bear - Rainbow Lorikeet - Tarsier - Sulawesi Macaque - Colugo - ?

The Indonesian jungles are packed with all kinds of animal species, most of which are endemic. Moreover, these tropical rainforests have an extraordinary diversity of plant life (there are more recorded tree species than in the whole of North America).
9. Kiwi - Kea - Rock Wren - Kakapo - Blue Duck - ?

Detaching from the Gondwana continent about 100 million years ago, the New Zealand archipelago conserved an unique fauna which includes the oldest reptile - Tuatara (although it is a primitive creature it can live up to 120 years). Other features of the New Zealand fauna are the many endemic birds and the lack of large predators.
10. Black Swallower - Gulper Eel - Giant Squid - Sea Devil - Hatchet Fish - Fangtooth - ?

Strange creatures lurk at the bottom of the ocean. Some of them terrifying, others fascinating, they all have adapted to cold and total darkness. Most of these deep-sea dwellers are small fish that developed unusual features: large eyes, large mouths, long teeth; they may even produce their own light.
Source: Author Mr5 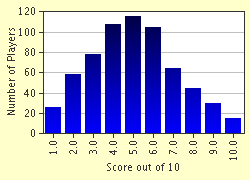 Related Quizzes
1. In Which Country Would You Find this Mammal? Easier
2. Pacific Islands: Two Legs, More or Less Easier
3. Know Your North American Carnivores Easier
4. Animals at the Pyramid of the Sun Average
5. More Than Kangaroos & Koalas: The Fauna of Oceania Average
6. Surfing the Sand Dunes Average
7. What Antipodean Animal is This? Average
8. The World of Animals Average
9. Wild in New Guinea Average
10. It's a Jungle Out There Average
11. Where in the World?? Average
12. The World of Animals [2] Average


Other Destinations
Explore Other Quizzes by Mr5