The World of Animals Trivia Quiz

Do you know where these animals come from? I will give you the name of an animal and all you need to do is guess which continent it comes from.

The impala lives in wide open spaces and can roam a great distance. It has a scent gland above the heel on each hind leg to enable it to follow its trail back to the herd.
2. The beautiful but dangerous Amur tiger comes from which continent?

The Amur tiger is a critically endangered species. There are only 400-500 left living in the wild. A carefully controlled breeding programme has been designed to save the species from total extinction.
3. From which continent does the numbat originate?

The numbat can eat about 20,000 termites a day and because of this it may also be known as the banded anteater. The numbat is an emblem of Western Australia.
4. The meerkat comes from which continent?

The meerkat has outstanding longsighted vision. It has a dark band around both eyes which enables it to see prey even if it looks directly into the sun. The meerkat will often miss food directly in front of it because of nearsightedness.
5. On which continent would you find the fishing cat?

The diet of the fishing cat may include birds, small mammals, snakes, snails and fish. The cat can attract fish by gently tapping the surface of the water and this will create a ripple effect as though an insect has landed. Fish will investigate and the fishing cat will pounce!
6. The kangaroo rat is known to live on which continent?

The kangaroo rat has a long tail, big hind feet with four toes, a large head with big eyes and small ears. It has a pouch for carrying seeds back to the burrow.
7. The chinchilla has become a household pet but where is its native habitat?

The chinchilla is originally from South America and more specifically the countries high in the Andes Mountain. The name literally means 'little chincha'.
8. On which continent would you find the bandicoot?

The bandicoot is a small grey or brown coloured marsupial living in Australia. It has a long, pointed and shrewlike face. It also has a long, bushy and ratlike tail. It ranges in size from a rat to a rabbit.
9. The roe deer can be found in Asia but they are more commonly known to roam which continent?

The roe deer is a relatively small deer and very quick and graceful to watch. Although not an endangered species, up to 90 per cent can die during their first year. This is due to fawns being heavily preyed on by fox and lynx in mainland Europe.
10. Do polar bears come from the Arctic or Antarctic?

Polar bears are the world's largest land carnivore. The soles of their feet have small projections and indents which act like suction cups. This helps them to walk on ice without slipping.
Source: Author Plodd 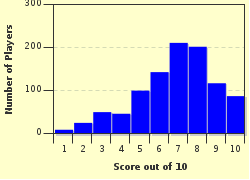 Related Quizzes
1. What Antipodean Animal is This? Average
2. Geo-Zoo - Missing Links by Region Tough
3. Animals at the Pyramid of the Sun Average
4. The World of Animals [2] Average
5. Know Your North American Carnivores Easier
6. Mammals of the Holy Land Tough
7. More Than Kangaroos & Koalas: The Fauna of Oceania Average
8. Pacific Islands: Two Legs, More or Less Easier
9. Wild in New Guinea Average
10. Surfing the Sand Dunes Average
11. It's a Jungle Out There Average
12. Where in the World?? Average