This is just a taste of some of the most well known mammals of Israel. Enjoy!

Quiz Answer Key and Fun Facts
1. These are rabbit sized mammals living under boulders in colonies like those of the prairie dog, but not rodents.

Rock hyraxes (Procavia spp.) are found in many locations throughout Israel from uplands to desert wadis. This unusual mammal is thought to be the closest relative of the elephants and may well be 'coney' ('shafan') mentioned in the Bible (Deuteronomy 14:7)
2. This beautiful hoofed mammal is a small graceful antelope found over much of Israel.

Known as 'tzvi' in Hebrew, the mountain race of Arabian gazelle is found over much of the country and the whereas the Dorcas gazelle can be found in the southern desert. Roe deer, though found in the country, are not antelopes but deer. The other two are antelopes, but are found in Africa.
3. This predator is a small wild dog which hunts alone or in pairs.

Golden Jackals (Canis aureus) prey on weak and injured gazelle when they can. Wolves also live in Israel but are larger, though paler and slighter than timber wolves. Hyenas live in the southern deserts but are solitary.
4. Two prickly mammals live in Israel but which one eats worms and other invertebrates?

The Indian porcupine is a vegetarian and quite common though not often seen because it is nocturnal. Its beautiful black and white banded spines can sometimes be found shed on the ground. Spiny echidnas live in Australasia and the thorny bat only exists in my imagination.
5. Another successful nocturnal mammal, solitary and with a bushy white-tipped tail, this one can sometimes be found raiding the garbage.

Red foxes are quite successful over much of Israel and are a serious concern for rabies control. The other three mammals listed are also found in Israel. The rarer Blanford's fox has a black tipped tail and the caracal is a larger and scarcer wild cat.
6. This mammal is a wild goat found in and around some desert wadis by the Dead Sea.

The male Nubian ibex has magnificent scimitar shaped horns which can be blown as a simple musical instrument, like a ram's horn. The other three mammals listed are actually antelopes.
7. This predator is the largest member of the cat family in Israel.

Sadly only a tiny population of these leopards (Panthera pardus nimr) remain in the southern deserts of Israel. (The Negev). Their natural prey is chiefly weak, old and sick ibex but elderly leopards have now taken to hunting house pets. Up to the early decades of the twentieth century, there was also a small population of leopards in the Galilee.
8. These hoofed mammals are tall, reputed to spit and often offered for rides for tourists.

Dromedaries are one-humped camels found throughout Israel as they are domesticated chiefly by the Bedouin. There are also feral camels, especially in the Arava region south of the Dead Sea. Motorists are warned to be careful by numerous camel hazard signs along the roads there!
9. They have bristles, snouts, cloven hooves, and plenty of good meat but very few are interested in eating them.

Wild boar have become agricultural pests in the upper Galilee and the Golan. Since the main ethnic groups in the country are Jewish and Muslim they do not have to worry about being prepared for the table.
10. Tristram, a British naturalist and cleric,last saw this large brown mammal in the Sea of Galilee back in 1898.

Brown bears are found in Syria and have occasionally wandered onto the Golan heights. Tristram's observation is the last known record of this bear in Israel proper. Beaver and elk do not occur in Israel. Otters are found in the upper Jordan river but are not giant in size!
Source: Author Yaarbiriah 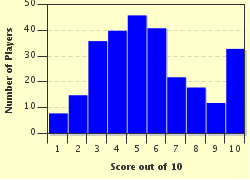 Related Quizzes
1. Pacific Islands: Two Legs, More or Less Easier
2. In Which Country Would You Find this Mammal? Easier
3. Know Your North American Carnivores Easier
4. Animals at the Pyramid of the Sun Average
5. More Than Kangaroos & Koalas: The Fauna of Oceania Average
6. What Antipodean Animal is This? Average
7. Surfing the Sand Dunes Average
8. The World of Animals Average
9. Wild in New Guinea Average
10. It's a Jungle Out There Average
11. The World of Animals [2] Average
12. Where in the World?? Average


Other Destinations
Explore Other Quizzes by Yaarbiriah