There are only a few places on Earth which can be described as truly wild. The dense forest of New Guinea is one such place. Take this quiz to look at some of the animals which live wild in these forests, away from major human activity.

Quiz Answer Key and Fun Facts
1. New Guinea is famous for its large population of beautiful birds. This bird in particular has a distinctive sickle-shaped head, a ridged beak which can reach up to 10 inches in length, and a predictably stunning display of colourful feathers (males only). The unusual structures of these bird's skulls has meant that they are hunted by local tribesmen, who wear the skulls as ornaments. Which bird is this?

The impressive beak of the hornbill is large and thick, with the characteristic "horn" being positioned between the top of the head and the halfway point of the beak. This beak is perfectly adapted to eating fruit, being the correct shape to pluck the fruit from branches and strong enough to crush even tough fruit.

Typically, the male will have coal-black plumage covering his body and a golden-ginger head. The area around the eyes of the adult male will usually feature no feathers, revealing bright blue skin.

Hornbills suffer greatly from the destruction of forested areas, as females build their nests in the hollows of trees. The dense forests of New Guinea are therefore a clear haven for such a bird.
2. This next wild beast is slightly less attractive. It roams the swamps of New Guinea, terrifying all who come across it and eating everything from tropical birds to eggs to rotten flesh. Which large lizard is this?

When observed in the wild, the crocodile monitor, like all monitors, is fairly slow moving. However, they can move in short bursts of terrific speeds. Monitors are also credited with having greater stamina than other lizards, possessing the ability to breathe whilst running. As well as sudden speed, the monitor's tough scaly skin and vicious bite make it deadly to creatures of all sizes, including humans.

Crocodile monitors can be distinguished from their relatives not only by their tremendous length, but their bulbous noses and yellow spots. The tail of the crocodile monitor is the main contributing factor to its length. This tail is vital for balance, tree-climbing, and defence.
3. After recent exploration of the island, several new species were discovered on New Guinea. As most of these were types of insect, scientists were thrilled to find a new species of mammal. Which of these animals was discovered in 2009 during an expedition to the island?

This discovery was made by a BBC crew whilst filming for a series of documentaries which were to be aired later that year. The giant rat was spotted by a camera which had been set up in the middle of the New Guinean forest. Known as the Bosavi woolly rat (Bosavi being the volcano it was found near), this massive rodent is just short of 3 ft in length.

It is very similar in appearance to common rats and has silvery-brown fur. Whilst being filmed, the presenters commented on the rat's lack of fear of humans.

This is unsurprising considering that this species of rat had probably never seen a human before, let alone a human which wanted to kill it.
4. It isn't just birds which thrive on the island of New Guinea, but reptiles too. Found in many areas in New Guinea, Australia, and other surrounding islands is a medium-sized (up to 37 cm) lizard - a type of skink. What colour, the colour of the inside of this skink's mouth, precedes "-tongued skink" to give the name of this lizard?

Blue-tongued skinks are omnivorous, their diet comprised of roughly 60% plant and 40% animal. They commonly feast on leafy plants, but also enjoy berries. They are fairly docile creatures and many are even kept as pets.

As with all lizards, the blue-tongued skink possesses Jacobson's organ, which works with the forked tongue to detect scent particles and find food. The cobalt blue tongue it used to scare predators.
5. Another bird which lives in New Guinea is the megapode. This bird is unusual in that it does not incubate its eggs with body heat. How do megapode birds incubate their eggs?


Answer: They build a mound of vegetation and leaves

The megapodes in New Guinea can be seen in the barren areas which surround large volcanoes. Because of the notorious lack of food in these areas, the presence of the megapode bird usually suggests that it is about to lay its eggs. The reason for choosing this volcanic, ashy terrain is for the warmth of the earth, as well as the lack of predators who may steal the eggs.

The egg of a megapode bird is very large, as the mother will bury it in the mound and move on, never to meet her young, so the chicks need to be born large, capable of fending for themselves.

The name megapode literally means "big foot" due to the bird's physical appearance. Megapodes are chicken-like birds, but some have significantly longer legs than others.
6. As an island, New Guinea has a huge variety of animals which can be found in no other places in the world. These unique species can be completely new to us, or variations on familiar animals. This question is about the latter. Which rather odd creature can you find on the island of New Guinea, behaving in a way that its namesakes would definitely not?

As the kangaroos we know today evolved from tree-dwelling marsupials, it seems odd that certain members of their family have returned to their arboreal states. One theory is that they were forced to start to climb trees due to limited ground space. This seems a likely explanation when taking into consideration the dense forest of New Guinea which the tree kangaroos inhabit.

Many of the tree kangaroos on New Guinea can be found in the crater of the volcano, Mount Bosavi. In such an isolated area (a crater in a volcano on an island) it is unsurprising that such creatures are not used to human contact. Also, the lack of natural predators means that these animals are unlikely to run from you, but rather waddle past blissfully.
7. The rainforest of New Guinea is also home to a variety of insects. What is peculiar on this island is a common killer of these insects. Which of these causes of death affects many ants on the island?


Answer: A parasitic fungus enters these ants and grows, eventually bursting out of the ant's body

This particular fungus, once gaining entry into the ant's body, begins to grow. Eventually, the fungus grows into the ant's brain, altering the its behaviour. Many have compared this to mind control - the fungus literally possesses the ant, causing it to climb to the top of a plant and grip the stem/leaf with its mandibles, before the fungal shoots erupt out of the ant's head. The emerging shoots release fungal spores, which are carried by the wind to other areas, where the fungus will most likely infect other ants.

Whilst the island of New Guinea does contain giant flying stick insects, they are not known for the behaviour mentioned in the incorrect answer option. Other insects on the island include the rhinoceros beetle, long-horned beetle, and bess beetle (which is known for the strong hissing sounds it can produce).
8. Off the coast of New Guinea, you will find a whole world of strange and wonderful creatures. One notable animal is the eeltail catfish. Although this creature sounds fairly mundane, it differs from most of its relatives in a large way. What difference is this?


Answer: They are venomous

The eeltail catfish is so named because of its flat, paddle-like tail. The fish are particularly odd looking in that they have several tentacle-like organs projecting from their mouths which are used to taste their environment. They are generally small in size, but some grow up to two foot in length.

The small size is compensated for by the venom located in the barbs of the fins. The sting of this fish is said to be extremely painful and so can protect it from animals such as crocodiles which share the water off the New Guinean coast.
9. The final and possibly most stunning New Guinean bird in this quiz is one noted for its brilliant courtship displays. The male of this species possesses extravagant, long, golden-brown feathers and a yellow and emerald head. Finally, this bird is the national bird of Papua New Guinea. Which bird is this?


Answer: The raggiana bird of paradise

The fantastic male birds perform complicated dances in order to attract females. Sometimes, there is more than one male and so they must compete for the attention of females in the area. Once the female has chosen her mate, the lucky male will continue his courtship ritual, jumping around next to the female, flapping his wings, jumping on top of her, and pecking her neck. Eventually mating will take place and the female will leave, later laying one or two eggs which are pink in colour.

Unlike some other types of birds, the reggiana bird of paradise does not stay with its mating partner for life. In fact, the male of this species can mate with several females within the space of a day.
10. Which animal, with species such as silky, mountain, and bear, and a name similar to that of a staple food in North Africa, was found by BBC documentary makers in 2009 to have a new sub-species on the island of New Guinea?

The cuscus is a marsupial, which looks like a cross between a possum and a small bear. They can be found in Australia as well as in the forests of New Guinea, often hiding in hollowed out tree stumps. They have rarely been filmed in the wild.

What is now known as the Bosavi silky cuscus is classed as a new sub-species of the small marsupial. This discovery was broadcast to the British public in September 2009, as were many other discoveries (mostly insects, bats, and frogs). This expedition consisted of a small group of animal experts and TV wildlife presenters who actively set out to find these new species. The expert on tropical insects, Dr George McGavin, joked on the show that if he were to find a new species of insect on the day of his wife's birthday (which he missed due to filming), he would name the insect after her.
Source: Author doublemm 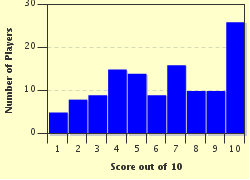 Related Quizzes
1. The World of Animals Average
2. Geo-Zoo - Missing Links by Region Tough
3. Know Your North American Carnivores Easier
4. Geo-Zoo - Other Missing Links Tough
5. Name the Country From Its Critters Tough
6. Where in the World?? Average
7. Mammals of the Holy Land Tough
8. In Which Country Would You Find this Mammal? Easier
9. What Antipodean Animal is This? Average
10. The World of Animals [2] Average
11. It's a Jungle Out There Average
12. More Than Kangaroos & Koalas: The Fauna of Oceania Average