Each question reproduces the fauna of a natural habitat or a certain region of the globe. Choose the 'missing link' that lives in the same region as the animals in the question.

You may find all these species in the Amazonian basin - the World's largest area of tropical rain forest.(its surface is ten times larger than the surface of France for example).
Though constantly diminishing in size, due to blindly human exploitation, the tropical rain forests are still home to more than half of the total animal and plant species.
2. Giraffe - Ostrich - Cheetah - Black Rhinoceros - Warthog - Lion - ?

Although you may find all these animals in a zoo, their natural habitat is the East African savanna. This grassland is warm all year round and it has two seasons: a dry one and a wet one. Depending on this, the huge herds of herbivores migrate in search for water.
3. Dromedary - Golden Jackal - Oryx - Horned Viper - Gecko - ?

With far less species than the two previous habitats, the tropical deserts are a tough place to live. The species populating these areas found different and original forms of adaptation to the harsh environment.
The species listed are to be found in the Sahara desert.
4. Echidna - Emu - Red Kangaroo - Koala - Dingo - Wombat - ?

The distinctive species of the Australian bushland are the egg-layer mammals and the marsupials. Almost all the native Australian mammals belong to one of these two primitive mammal groups, this being the result of the continent's isolation.
5. Pika - Porcupine - Grizzly Bear - Cougar - Moose - Bighorn Sheep - ?

These are the species you should encounter if you took the tour of the Rocky Mountains.
6. Reindeer - Lemming - Caribou - Rock Ptarmigan - Arctic Fox -?

The adaptation to cold weather is the key of survival in the hostile Arctic tundra. With a medium annual temperature of around -10 degrees C, the ground deep-under remains permanently frozen. This thick frozen layer (up to 450 m deep), called permafrost doesn't allow the water to get through so the tundra regions are generally swampy.
7. Giant Clam - Parrot Fish - Moray Eel - Angelfish - White Shark - ?

The coral reefs are one of the richest habitats on the Globe. Out of these 'ocean forests'- as they are sometimes referred to, the largest by far is the Great Barrier Reef, situated just to the northeast of the Australian coast. It is the only natural structure visible from space.
8. Galapagos Penguin - Giant Tortoise - Frigate Bird - Lava Lizard -Flightless Cormorant - ?

Some regions of the Globe have an unique flora and fauna as a consequence of geographical isolation. Such is the case of the Galapagos Archipelago which houses more than 50 endemic species of reptiles, birds and mammals.
9. Reddish Fossa - Chameleon - Aye-Aye - Ring-tailed Lemur - ?

Apart from the many endemic species of animals, Madagascar is the land of the lemurs (group belonging to the Primates). Over 30 lemur families have been researched and more are still being discovered.
10. Indian Rhinoceros - Tiger - Jungle Cat - Four-horned Antelope - Asiatic Elephant - ?

The last selection for the quiz was India. The very diversified fauna of this country is nowadays protected in numerous national parks and reservations.
Source: Author Mr5

This quiz was reviewed by FunTrivia editor crisw before going online.
Any errors found in FunTrivia content are routinely corrected through our feedback system.
Most Recent Scores
Jan 01 2023 : piet: 10/10
Dec 17 2022 : ClarkyB: 10/10 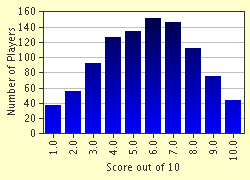 Related Quizzes
1. Pacific Islands: Two Legs, More or Less Easier
2. Know Your North American Carnivores Easier
3. The World of Animals Average
4. Name the Country From Its Critters Tough
5. It's a Jungle Out There Average
6. Animals at the Pyramid of the Sun Average
7. More Than Kangaroos & Koalas: The Fauna of Oceania Average
8. In Which Country Would You Find this Mammal? Easier
9. Surfing the Sand Dunes Average
10. Wild in New Guinea Average
11. The World of Animals [2] Average
12. What Antipodean Animal is This? Average


Other Destinations
Explore Other Quizzes by Mr5