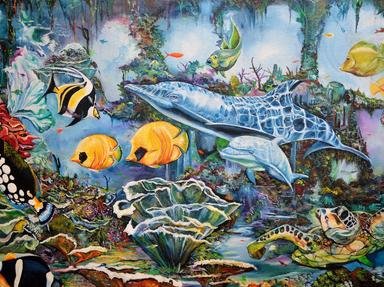 Rather than looking at the whole animal, your clues will be just the paw, or even the track left by the animal's foot. See how you get on.

Quiz Answer Key and Fun Facts
1. The scientific family name for this animal derives from its very large feet, which you can see in the picture. It also appears on the coat of arms of the country where most of them live. Which of these is it?

The kangaroo belongs to the macropodidae family - macro meaning large and pod meaning foot. Kangaroos are mainly found in Australia, although one type, the tree-kangaroo, lives in New Guinea. The feet shown are the hind feet - the front ones are much smaller - and are used for propulsion: the kangaroo's characteristic hop.

The kangaroo and emu are the two animals which appear on the coat of arms adopted by Australia in 1912. Lions can be found on many coats of arms, including those of Canada and Belgium while the camel appears on Eritrea's. Bears can be found on coats of arms belonging to Berlin and Bern, among others.
2. The paw pictured belongs to a member of a cat family, the most sociable of the cats which live in the wild. Which of these is it?

Most big cats are solitary creatures, meeting only for mating, or consisting of females with their young. Lions, though, form large groups or prides, with several females, their offspring and, usually, two males. The lionesses work together as a team when hunting for prey - in Africa consisting of wildebeest, zebras and gazelles. Lions are mainly found in Africa, although there are still some in parts of India in the early twenty-first century.
3. Unlike most of the animals in the quiz, these feet belong to a creature often seen in our gardens. Which rodent, found in most continents and renowned for its agility, is attached to these paws?

Raccoons are found mainly in North America, although there are introduced populations in other countries, including Japan and Germany. Dormice are mainly European animals, with small populations in Asia and Africa, and you are unlikely to see them in your garden.

Chipmunks, which are members of the same family, Sciuridae, as squirrels are not normally found outside North America, apart from one Asian species.

Grey squirrels, on the other hand, have found pawholds in all continents apart from Antarctica and Australia. They are very adaptable animals, and help themselves to much of the food left out for birds in our gardens.
4. Although they are not shrouded in mist, can you identify the ape to which these feet belong?

All the animals listed belong to the ape family, but the feet in the photo are attached to the largest of them, the gorilla. Wild gorillas live in Africa, and are divided into two main species - the western and eastern, based on where they live, either side of the Congo river.

The anthropologist Dian Fossey studied the gorillas of Rwanda, and wrote about her findings in her book, 'Gorillas in the Mist', in 1987 - hence the extra clue in the question.
5. A picture of this animal's feet would be too much of a giveaway, so here is a photograph of the footprint left by the African species. Which large mammal is it?

The elephant is one of the most recognisable animals in the world, with the African species being largest of the land mammals. They are animals which can adapt to various environments, although most of the remaining population lives in the nature reserves in Africa. Specialist elephant sanctuaries can be found in Kenya and South Africa.
6. The foot in the photo belongs to a member of the Mustelidae family, and belongs to a mammal found mainly in the coastal regions of the Pacific. Which of these is it?

Sea otters live mostly in the water, in kelp and seaweed beds which they wrap around themselves to save them from floating out to sea while sleeping. The animals spend most of their time in the sea, with the females even giving birth while afloat. They have also been observed to use 'tools', such as rocks to break open shellfish.

Their thick coats, so useful to the animals in protecting them from cold water, made them a target for hunters. Although the sea otter came close to extinction, laws passed to protect them have enabled their numbers to recover.
7. This is an unusual angle from which to view this predatory mammal, which lives mainly in the Arctic. Which of the choices is it?

The polar bear is one of the largest carnivores on the planet in the twenty-first century, and is well adapted for the cold. It is able to gain traction on the ice due to the bumps on its pads and is protected by two layers of fur and a thick layer of fat (blubber).

They are excellent swimmers and researchers have recorded them covering distances of over 200 miles, although around 100 miles is more of an average.
8. If you own a dog, you've probably seen this pose, but these paws belong to which member, the largest, of the canine family? (Common English family name only, not a specific species).

Wolves live in parts of Africa, in North America, Europe and Asia. The largest of the species is known variously as the grey wolf, the western wolf and the timber wolf, and other species include the Arctic wolf, the red wolf and the Indian wolf. Wolves have been around for thousands of years, and are mentioned in the Bible on several occasions.
9. These fearsome looking claws are needed for digging out burrows in the ground. They belong to which nocturnal creatures which can be found in Europe, North America and parts of Asia?

Badgers belong to the Mustelidae family, along with otters, polecats and weasels, among others. Their distinctive black and white colouring makes them easily recognisable, but identifying them just from the claws might be less easy. Their burrows are actually known as setts and are extensive, with many interlinking tunnels, with the badgers, in groups of a dozen or more, spending the daylight hours underground.
10. I'd recommend you not to try and catch this animal, the largest of its family, by its tail. Can you recognise it just from its paw?

The paw in the photo belongs to a cub, so was relatively safe, but a full grown tiger can weigh nearly 400 kg and is not to be tangled with. The Bengal and Siberian tigers are the largest of the species, and are taller and heavier than lions. Tigers are found only in Asia in the wild, and their numbers are decreasing due to the pressures of living in proximity to humans.
Source: Author rossian 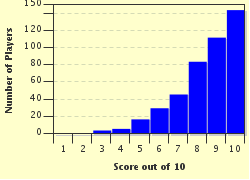 Related Quizzes
This quiz is part of series I'm Just Wild About...:

Quizzes about wild animals, birds and other creatures appear in this list.