This is a quiz about poisonous and venomous animals and plants found in Australia. Don't forget to try my other Australian animal quiz, 'Great Australian Fauna'. Watch your step!

Quiz Answer Key and Fun Facts
1. In America they call it the black widow spider, what do Australians call it?

Red-back spiders are found throughout the warmer parts of the world including Europe, North America, New Zealand and Australia. Only the female is dangerous. They can cause serious illness and even death. However, no deaths have been reported since the introduction of anti-venom.
2. This is the most venomous jellyfish in the world.

The box jellyfish is found in northern Australia where it feeds on small fish and crustaceans. It has up to 5000 stinging cells and if stung you have virtually no chance of survival unless treated immediately. Because the pain is so bad, you are more likely to go into shock and drown before reaching the shore.

There are other types of box jellyfish, but the one to avoid is found in various areas of the Indo-Pacific area, not just off the coast of Australia.
3. This was considered one of the most venomous snakes in the world, until the discovery of the fierce snake...its cousin.

The taipan is a very highly venomous snake producing approximately 120 mg of venom. A maximum of 400 mg has been recorded, about 50 times more than a cobra. If you are unfortunate enough to be bitten, you will be bitten more than once.
4. This ant is one of the most dangerous in the world and can reach 4cm in length. What type of ant am I talking about?

They are very aggressive and have been responsible for three deaths. The black bulldog ant is the most aggressive in the genus as it has been known to follow an intruder up to 10m from its nest. Some species are able to jump more than 30cm, over 15 times its own length.
5. This is the most venomous fish in the world.

The stonefish is found along the Queensland coast and is known for its ugly looks, but is very hard to spot among the sand or mud. Unfortunately, shoes are virtually useless if you step on a stonefish as the spines can penetrate sandals and rubber-soled shoes. If death occurs, it is usually within 6 hours.
6. This is the most venomous octopus in the world.

The blue-ringed octopus can bite and spit venomous saliva into a tight space. It has enough venom in its venom glands to kill 10 grown men. They are very small creatures and are often found in rock pools and if you are bitten you will most likely not realise it. Paralysis and death can occur within an hour and a half.
7. What suitin a deck of cards most resembles the shape of the leaf of the stinging tree?

It has poisonous hairs on the leaves and just a slight brush can cause a lot of pain and illness. If you are stung, don't rub the skin. A way to alleviate some of the pain is to get some adhesive tape and put it over the pain and then tear it off. This will work like a body wax and may take out the nettles in the skin.
8. This is the world's most infectious tick.

This tick contains a toxin in its saliva that may cause progressive paralysis in humans. It killed about 20 people in the 20th century.
9. What colour is the abdomen of the red headed mouse spider?

Mouse spiders belong to the trapdoor family and are found throughout mainland Australia. The venom of this spider has been shown to be as toxic as the funnel-web spider. They are very aggressive spiders and adopt an attacking position like the funnel-web. They are known for their extremely thick fangs.
10. What monotreme has a very toxic spur?

Keep in mind that sting rays and wombats are not monotremes and the enchidna's spur is not toxic. The platypus is one of two mammals in the world that lay eggs. The spur is about 15mm long and only the males have it. When stung you will feel great pain and severe localised swelling.
Source: Author gumnutgirl16 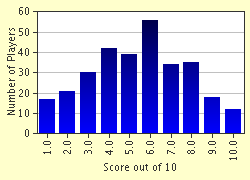 
Other Destinations
Explore Other Quizzes by gumnutgirl16