The cane toad is an introduced species to Australia: one which is causing a giant environmental headache. Take this quiz to find out about the cane toad and how Australia is approaching the control of this pest.

Quiz Answer Key and Fun Facts
1. In which Australian state was the cane toad first introduced?

A shipment of around 100 cane toads arrived in Queensland in June, 1935. These toads were bred to increase their numbers and eventually more than 3000 of them were released in northern Queensland. The cane toad spread rapidly and is now found across a broad swathe of Australia, ranging from Kakadu National Park in the Northern Territory to northern New South Wales.
2. To which region are cane toads native?

Cane toads are native to the southern United States and tropical regions of South America. The cane toads introduced to Australia were shipped to the country from Hawaii. Cane toads can live in a variety of environments from sand dunes to the outskirts of tropical forests and mangroves.
3. What is the cane toad's scientific name?

Bufo americanus is the American toad, Bufo terrestris is the southern toad and Bufo biporcatus is the Indonesian toad. Cane toads can range in colour from grey to reddish-brown, with paler-coloured undersides. They are a large species, with adults able to reach sizes of up to 15 cm.
4. As adults, cane toads are most active during warm weather. At what time is this activity concentrated?

Cane toads are generally nocturnal. When the weather is cold and/or dry, they prefer to find shelter, which they are able to dig for themselves if necessary. They are a hardy species, and can tolerate a temperature range of 5-40 degrees Centigrade.
5. Cane toads are poisonous. Where is this poison concentrated?


Answer: In glands near each eardrum.

The cane toad's parotoid glands (one on each side of the head, just behind each eardrum) are where the poison is concentrated; however, cane toads are more or less poisonous everywhere - even their internal organs contain low concentrations of the poison. Usually, the poison is used defensively by oozing it over the skin from the parotoid glands, but the toad is also able to shoot a thin stream of poison from the glands if it feels threatened.
6. What Australian pest were cane toads introduced to control?

The cane toad was introduced as a biological control for cane beetles, which cause a lot of problems for Queensland's sugar cane industry. However, while the cane toad will certainly eat cane beetles, the difficulty is that it has to catch them first: the beetles can fly, while toads cannot! Unfortunately, the cane toad wasn't too concerned about this, and began to eat just about anything else it could find - crickets, honey bees, ants and even small native frogs are all cane toad food.
7. Why is the presence of the cane toad such a problem for the Australian environment?

The cane toad's presence in Australia has been one environmental disaster after another. Besides the problems mentioned in the question, cane toads can also poison humans and pets who pick them up, and they also eat large numbers of honey bees, which creates problems for apiarists.

As well as outcompeting native species for food and shelter, cane toads also push native species out of their breeding habitats.
8. While cane toads are poisonous, some Australian animals can eat them without apparently suffering any ill-effects. Which one of the the following can do this?

Other predators of the cane toad include freshwater crayfish, crows and the tawny frogmouth (a native Australian bird). Cane toad tadpoles are prey for water beetles and saw-shelled turtles, among others. Goannas, tiger snakes and dingoes have been reported as having died from either eating a cane toad or even just picking one up in their mouth.
9. Cane toad venom has been reportedly used as a dental anaesthetic.

Not only is cane toad venom more efficient than conventional dental anaesthetics, it has also been reported to stop bleeding after tooth extraction (I don't know about you, but I think I'll stick to novocaine, thanks!). In other "I can't believe they used a cane toad for THAT" news, a book covered with cane toad hide leather was sent to Prince Charles and Lady Diana as a wedding present from Queensland and was apparently very much appreciated.

Other reported off-the-wall cane toad uses include stuffing them and selling them as souvenirs for tourists, cooking them (once the poisonous skin has been completely removed) and using the poison in hair restorer.
10. A method of cane toad control in Australia is urgently needed. Which of the following methods has been suggested?

The most obvious way of controlling cane toads is to use biological control - the very thing cane toads were introduced into Australia to do! Recent reseach has suggested that gene technology could play a role in this regard. Work is also being carried out into the possibility of isolating the toad's sex pheromone - if this can be done, then the toad's breeding cycle may be able to be disrupted. Chemical control has also been put forward as a possibility, although a suitable "toadicide" has yet to be developed. Legislative control is already in place, with quarantine requirements enforced throughout Australia. Members of the public already enforce their own kind of control, with reports of Queensland farmers taking great delight in squashing cane toads on the road with their cars!
Source: Author NatalieW 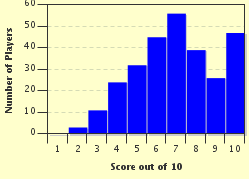