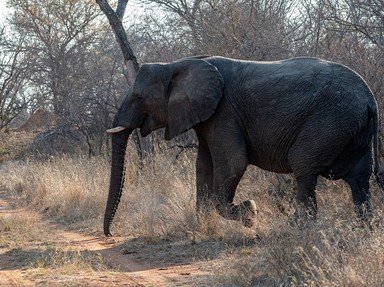 This is a quiz about the African and Asian elephants.

Share on Facebook
Share on Twitter
Share by E-Mail
Author
irisfreamon
Time
4 mins
Type
Multiple Choice
Quiz #
344,860
Updated
Dec 03 21
# Qns
10
Difficulty
Average
Avg Score
8 / 10
Plays
1397
This quiz has 2 formats: you can play it as a or as shown below.
Scroll down to the bottom for the answer key.

Quiz Answer Key and Fun Facts
1. What genus does the African elephant belong to?

There are 2 different species within the genus Loxodonta and these are "africana" and "cyclotis". Canis is the genus for dogs, including wolves and coyotes. Homo is the genus of us humans. Elephas is the genus of the Indian/Asian elephant.
2. The African elephant is the largest living terrestrial animal.

It is sometimes misquoted that the African elephant is the largest animal on earth, but that distinction is held by the blue whale. A terrestrial animal is an animal that lives solely on land.
3. What continent do African elephants live on?

Savannah elephants are found in 37 countries in Africa in zones called the "Savannah zones" which are found south of the Sahara desert. Forest elephants live in the rain forests of west and central Africa.
4. An elephants' trunk can be used for all of the following except ______ .

Elephants use their tusks to dig for roots.

The trunk has an incredible 40,000 muscles alone. This is even more amazing to hear when you realize that an adult human only has 639 muscles in their entire body. The trunk is a combination lip and nose. The trunk is also strong enough to assist in toppling a tree yet fine tuned enough to pick up a single blade of grass. In addition, trunks are used in threat displays, used for dust baths, and can be used to discipline babies as well as adults.
5. An elephant's tusk is made of _____ .

The ivory has unfortunately been the downfall of both Asian and African elephants. Walruses and Narwhal's also have ivory "tusks".
6. Elephants live in a social group that consists of cows and their daughters. These groups are led by the oldest female. What is the title given to the female that leads the herd?

Matriarchs are often the eldest females in the group. They become leaders because they have years of experience and remember where water, food, and important minerals are. They also help calm first time elephant mothers because they have had the same experience. The matriarch is also the grandmother and sometimes great grandmother of some of the females in the herd.
7. Elephants are one of the few mammals to live beyond their reproductive years.

Many mammals breed and reproduce until they die. Elephants and humans are some of the few animals that continue to live after they can no longer reproduce. Elephants stop reproducing around the age of 50, which is similar to humans. However, after they stop reproducing, they can live an additional 20 years. During this time the female helps take care of younger calves.
8. What is an ADULT elephant's only non quadrupedal enemy?

Elephant calves often fall victim to predators and there have been videos of lions attacking calves. Therefore, being bipedal, humans are their only two legged enemy.
9. What is a male elephant called?

The term "bull" is used for the male of many different species of animals, the most well known of which are male cattle.
10. Asian elephants perform many jobs for people. Which of the following jobs that they do on a regular basis is actually hurting their wild counterparts?


Answer: Moving logs from the forest

Deforestation is one of the major reasons why Asian elephants are endangered. The logs that captive elephants are removing were the same trees that wild elephants used for food and scratching posts.
Source: Author irisfreamon

This quiz was reviewed by FunTrivia editor gtho4 before going online.
Any errors found in FunTrivia content are routinely corrected through our feedback system.
Related Quizzes
1. What Do You Know About Elephants? Average
2. The Big and the Beautiful Difficult
3. Born in the Wild: Elephant Easier
4. The Elegant Elephant Average
5. Elephants Average
6. Hedgehogs Tough
7. Aardvarks ! Average
8. Mountains From Mole Hills Tough
9. Ever met a Rock Hyrax? (Procavia capensis) Average
10. Wild At Night Average
11. The Happy Hedgehog Tough
12. Enter the Aardvark Average


Other Destinations
Explore Other Quizzes by irisfreamon