True or False: Myths and Facts About Animals Quiz

Consider the following statements about animals and their behavior. Some are common misconceptions, others are more obscure facts. All can be answered "True" or "False."

Quiz Answer Key and Fun Facts
1. Tasmanian devil females give birth to 20-30 babies at a time, but since they have only four nipples, most babies do not survive.

The tiny newborns, smaller than grapes, crawl up the mom's fur and into her pouch to grow, but since feeding stations are limited, most don't get enough nourishment to make it. The ones that do survive emerge after about four months and are weaned by month six.
2. By weight, human beings and insects are about equal in mass on earth.

Insects are by far the most numerous creature on Earth by number, and the best scientific estimates say their collective mass is at least 200 times that of all human beings.
3. Ostriches bury their heads in the sand to avoid danger.

Although they do dig in the sand with their beaks to make holes for their eggs, ostriches don't "hide" their heads in the sand. When faced with danger, they take off running at speeds up to 70 kilometers per hour. When cornered or protecting young, they will kick the living daylights out of whoever or whatever is threatening them if necessary.
4. Snakes have no eyelids.

You may have heard that snakes have no eyelids, but strictly speaking, they do. They have a single layer of clear skin across their eyes which they can see through. This skin is shed along with their regular skin. In the period just before they shed, the new skin has started to form and fluid builds up between layers, so if your snake has cloudy eyes, it's about to lose its skin (and its eyelids!)
5. A sperm whale's head is filled with an oily substance called spermaceti, the purpose of which scientists cannot definitively explain.

Spermaceti is the waxy substance found in the cranial cavity of this giant species of whale. The term comes from the Greek word for seed (sperma) and the Latin for whale (cetus). Whalers in the 19th century hunted the sperm whale to near extinction, largely for this material. Of course, the meat and blubber were also used.

When separated out, the oil from the spermaceti was highly prized as fuel since it stays liquid at low temperatures. Some experts believe the whales can heat the fluid in their heads to increase buoyancy and help them float.
6. Dogs sweat primarily through their feet.

Unlike humans, dogs don't have sweat glands in most of the pores in their skin. They do sweat through their paws, which you can observe by seeing wet footprints on a stone surface when it's hot. Also more obviously, dogs keep cool by panting, which allows moisture to evaporate off their tongues. Spraying your dog with cool mist is a great way to prevent it from overheating on a very hot day.
7. If a human touches a baby bird, the mother will reject it.

According to snopes.com, this urban legend is false. Most birds' sense of smell is not acute enough to discern the wiff of a past human touch. Evidently if eggs are moved around in a nest, the bird may sense intruder danger and temporarily stay away, but even that is rare. Young birds are best left alone because their parents know more than you do about how to raise them.
8. A red kangaroo can leap up to eight meters in distance and three meters high in a single bound.

The red kangaroo- unofficial symbol of Australia and largest marsupial- is quite common on the dry interior plains of the country. Its grey cousins prefer forests and scrub lands and are actually more plentiful than the reds, although less iconic. Interestingly, kangaroos can only hop forward, using both feet together, but can kick their legs individually when swimming (which they do well). Tendons in their back feet act like springs or rubber bands, stretching as the kangaroo's feet touch ground and releasing energy to provide the force for their bouncing gait. Kangaroos eat mostly grass and can be seen individually or in large groups.
9. Flying fish and flying squirrels actually only glide long distances through the air. Birds are the only animals that fly.

This is false because although the "flying" version of fish and squirrels don't really fly, bats, which are mammals, do fly and quite well, thank you. There are 64 species of flying fish (family Exocoetidae) inhabiting all oceans. Propelling themselves out of the water and gliding up to 50 meters through the air is a predator escape adaptive behavior.
10. Camels store water in their humps.

The inside of a camel hump is made up of fat, not water. Camels can survive much longer than most other mammals- up to a week or more - without water because of the unusually elongated structure of their red blood cells and the superior efficiency of their excretory system.

Their kidneys and guts retain water so well that their urine is as thick as syrup and their feces are so dry that it can be lit on fire!
Source: Author Nealzineatser 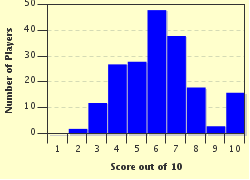 
Other Destinations
Explore Other Quizzes by Nealzineatser