Archie Bunker's Neighborhood - Astoria is an ordinary working-class neighborhood in the Queens borough of New York City. It's known mainly as the setting for TV's "All in the Family"- but a lot of famous people have come from my old neighborhood, too!

Quiz Answer Key and Fun Facts
1. Which of these Oscar-winning actors was born and raised in Astoria, New York, where his father ran a bakery under an elevated train platform? Hint: He's best known for playing quirky, strange or even psychotic characters on screen.

Walken's Bakery was a fabulous place to get birthday and wedding cakes!

Christopher Walken, whose real first name is Ronald, has made a career of playing odd characters in films like "Pulp Fiction". He took home a Best Supporting Actor Oscar in 1979 for his work in "The Deer Hunter."
2. Which of these classy, Grammy-winning Italian-American singers was born and raised in Astoria, New York?

Tony, who was born Anthony Benedetto in Astoria, was popular among easy listening fans for decades, but gained a new popularity among young listeners in the 1990's. His Grammy-winning 1994 "Unplugged" album featured guest vocals from Elvis Costello and k.d. lang.
3. Which of these popular folk singers was born in Astoria, New York, performed at the 1969 Woodstock festival, and scored her first Top 10 hit with the help of the Edwin Hawkins Singers?

Melanie Safka, who performed under her first name alone, scored her first U.S. hit in 1970 with "Lay Down (Candles in the Rain)," which featured backing vocals by Edwin Hawkins Singers. The song was inspired by her experience as a performer at Woodstock, where despite heavy rain, tens of thousands of fans held up candles, matches and cigarette lighters to salute her.
4. Bret Maverick (James Garner) had a never-ending stream of relatives on the comical TV Western "Maverick". Which relative was played by Astoria-born Jack Kelly?

Unlike most previous Western heroes, Bret and Bart Maverick were con artists and cowards, who'd rather run than fight!

Roger Moore appeared on the show, every now and then, as Bret's cousin Beau.
5. What Greek-American actor from Astoria travelled across the U.S.A. with Martin Milner, in the TV drama series "Route 66"?

In 1963, Maharis left the series after three seasons, and was replaced by Glenn Corbett. The show quickly lost its audience, and was soon cancelled.

Still, you wouldn't think it would take three years to complete a drive down Route 66, would you?
6. Astoria girl Ethel Zimmerman dropped the first syllable of her last name and became a huge Broadway star as Ethel Merman. For which musical did she win the Tony as Best Actress?

Ethel won the Tony as Best Actress in a Musical for her performance as a brassy diplomat in Irving Berlin's "Call Me Madam," in 1951.

Ethel made a hilarious cameo appearance in the movie "Airplane!", playing a demented serviceman who thought he was Ethel Merman.
7. Astoria-born Al Oerter won four consecutive Olympic gold medals in which track and field event?

Patrick McGoohan gained stardom playing spy John Drake on the British action series "Danger Man" (released as "Secret Agent" in the U.S.) and the retired spy known only as Number 6 on the cult hit "The Prisoner."

McGoohan's parents were from Ireland's County Leitrim. They moved to Astoria, New York, where Patrick was born, but moved back to Ireland with Patrick while he was still a child.
9. Each of these actors has played a villain in a James Bond film. One of them was born in Astoria, New York, and took up acting after a nun at his Catholic grammar school told him he had a nice singing voice. Which of them is the Astoria boy?

As Ross on "Friends," Schwimmer was a shy, clueless loser. As Sobel in "Band of Brothers," he was a mean S.O.B. who seemed to enjoy tormenting and humiliating his men. Soldiers who actually served under Sobel almost always hated him, but many give him credit for making sure they were well-trained and prepared for anything they'd experience in real combat.
Source: Author astorian 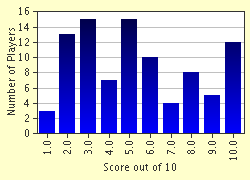 
Other Destinations
Explore Other Quizzes by astorian