Many famous musicians die at the age of 27. This quiz looks into the different musicians and how they died. It includes members of the "27 club" and some other well known musicians who passed away at 27.


Answer: Musicians who all died at the age of 27.

The 27 club is the name for a group of famous musicians who all died at the age of 27. It is also known as Club 27 or the Forever 27 Club. Most of the deaths were within a two year period of one another.
2. This musician was the lead singer, songwriter and guitarist for the popular grunge band known as Nirvana. Who was he?

Kurt Cobain died in 1994 after committing suicide with a shotgun. According to the book "Heavier Than Heaven" by Charles R. Cross, published after Kurt's death, his sister had said that as a kid Kurt would talk about how he wanted to join the 27 Club.
3. This musician was the founder, guitarist and back-up vocalist of the rock band The Rolling Stones. Who was he?

Brian Jones died in 1969 after drowning in a swimming pool. Jones was a talented musician known for his ability to play different instruments including guitar, organ, harmonica and saxophone.
4. Born in Seattle, Washington this musician is, to many listeners and critics alike, known as the greatest guitar player of all time. Who was he?

Janis Joplin died in 1970 after overdosing on heroin. She was a break through artist in a male dominated music industry during the 1960s. Joplin was a major influence on young hopefuls striving to become musicians.
6. This musician was a singer, songwriter and video director who was the frontman for the rock band The Doors. Who was he?

Jim Morrison died in 1971 of "heart failure", although no autopsy was carried out. Not many people know that Morrison authored seven books on poetry. He was thought as one of the most charismatic frontmen in rock history.
7. This musician was a bluesman, recording 29 songs that influenced generations to come. Who was he?

Robert Johnson died in 1938 of what was thought to be strychnine poisoning. Considered as the "Grandfather of Rock 'n' Roll", Johnson has influenced many artists including Bob Dylan, Eric Clapton and Led Zeppelin.
8. Born in Texas, this musician was an R&B singer and songwriter. Who was he?

Jesse died in a car crash on February 6, 1960. He has released some very well known songs such as "Goodnight My Love", "Guess Who" and a cover of the hit "In the Still of the Night". He is also well known for his amazing skills as a pianist.
9. This musician was the lyricist and guitarist for the band Manic Street Preachers. Who was he?

Richey James Edwards went missing on the 1st of February 1995 and has never been found. He had not been declared dead until the 23rd of November 2008, because his family still had hope and chose up until this day to leave him as a "missing person".
10. Four musicians who died at the age of 27 all had a common item in their possession. What was this item, which has gone on to be considered an unlucky item?

Among the stoner culture there is a legend that the use of a white lighter is considered unlucky. The musicians possessing the lighter were Brian Jones, Jimi Hendrix, Janis Joplin and Jim Morrison.
Source: Author Nickotopolous 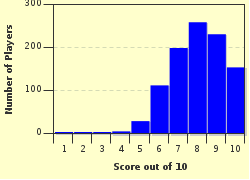 
Other Destinations
Explore Other Quizzes by Nickotopolous