The Days (and Ways) the Music Died Quiz

Test your knowledge of interesting (I hope!) and challenging facts about events surrounding the untimely deaths of popular musicians.

Quiz Answer Key and Fun Facts
1. At the time of the plane crash that killed Buddy Holly, Ritchie Valens, and the Big Bopper, which of the three had the highest-ranking single in the charts?

Valens, only 17 at the time of the February 3, 1959 plane crash, was the only one of the singers who had a single on the charts at the time. His single "Donna" had been released in late 1958 and peaked at Number 2. Holly, the most established of the three, had been in a slump, with no top 10 hits the year before he died, and "Heartbeat," his last single before the plane crash, peaking at 82. The Big Bopper's song "Chantilly Lace" was his principal hit, with 22 weeks on the charts after its release in the summer of 1958, but it had slipped from the charts by the start of 1959.

The "B" side of "Donna" was "La Bamba," the song that Valens is best remembered for today.
2. Which of the following statements about musicians who died in the 1960s is false?

Otis Redding died on December 10, 1967 in a plane crash, just three days after recording "(Sittin' On) the Dock of the Bay," his most famous song.

Patsy Cline died in a 1963 plane crash at age 30. Another Nashville performer, Jack Anglin, was killed in a car crash on his way to her funeral.

Sam Cooke, the smooth-singing crooner who gave the world such songs as "You Send Me," died in unusual circumstances in 1964. After a woman with whom he had booked a motel room left with his clothing and money, he chased her, clad in just his underwear. When he burst into the office of the motel manager looking for the woman, the manager shot and killed him, an act that was later ruled justifiable homicide.

Brian Jones, who founded the Rolling Stones, died in mysterious circumstances in 1969, a month after being fired from the band. He was found at the bottom of his swimming pool, despite being a strong swimmer. The death was officially ruled "death by misadventure" related to drugs and alcohol, but there has been much speculation that a construction worker staying at the house murdered him. Another interesting side note to Jones' death: he was staying in a house built by Winnie the Pooh creator A. A. Milne, and the grounds were decorated with statues of Christopher Robin and characters from the Pooh stories.
3. Which band lost two of its members in motorcycle accidents, 13 months apart, both in Macon, GA?

Guitarist Duane Allman, who founded the Allman Brothers with his brother Gregg and is widely considered to be one of the greatest guitarists of all time, died on October 29, 1971 when his motorcycle crashed into a heavy truck that had suddenly stopped in front of it. On November 11, 1972, Berry Oakley, bassist for the Allman Brothers, died from injuries suffered in a motorcycle accident just three blocks from the site of Allman's crash.
4. What did the 1970 death of Jimi Hendrix and the 1980 death of John Bonham have in common?


Answer: Both choked on their own vomit

A fact as unappetizing as their music was savory, guitarist Jimi Hendrix and Led Zeppelin drummer John "Bonzo" Bonham both choked on their own vomit while sleeping under the influence of sleeping pills (Hendrix had taken nine sleeping pills prior to his September 18, 1970 death) or alcohol (Bonham reputedly drained several dozen shots of vodka in the 24 hours before his September 25, 1980 death).

Hendrix died in London at the age of 27; Bonham died in the Windsor suburb of London and was 32.
5. Hours before being murdered on December 8, 1980, John Lennon had been doing work in the recording studio on which single?

Monday December 8 was a busy day for John Lennon. He and Yoko Ono posed for photographer Annie Leibowitz (the picture was used for the Rolling Stone magazine cover in the issue reporting on his death), he autographed a copy of the newly-released "Double Fantasy" album for Mark David Chapman, who would murder him later that night, and with Yoko, did some sound work for the "Walking On Thin Ice" single that was released in early 1981. Upon returning to their apartment that evening from working on the single, Lennon was shot and killed.
6. Who shot and killed longtime Motown superstar Marvin Gaye?

Marvin Gaye had been an early Motown superstar in the 1960s, evolving from that genre, to political songs like "What's Going On" in the early 70s, to disco-era funk, to the 1982 hit "Sexual Healing." Plagued by drug problems, he moved into his parents' house around that time, renewing his tense relationship with his father, Marvin Gay Sr. (the younger Marvin added the "e" to his surname partially as a way to distance himself from his father). On April 1, 1984, a day before his 45th birthday, Marvin Gaye tried to intervene in an argument between his parents and was shot twice by his father. Marvin Gay Sr. was convicted, sentenced to six years of probation, and died of pneumonia in 1998.
7. When three members of Lynyrd Skynyrd died in a 1977 plane crash, their record company recalled several pressings of their just-released "Street Survivors" album. Why?


Answer: The cover showed the band engulfed in flames

The popular southern rock band Lynyrd Skynyrd had just released "Street Survivors," its fifth studio album, in October 1977, and had begun a US tour, when its plane crashed on October 20 en route from Greenville, SC to Baton Rouge, LA. Lead singer Ronnie Van Zant, guitarist Steve Gaines, and backup singer Cassie Gaines (sister of Steve) all died in the crash, along with their assistant road manager and the plane's pilot and co-pilot.

The cover of "Street Survivors" showed the band in front of a raging fire, seemingly engulfed in the flames. This cover was quickly replaced with another photo of the band standing in a spotlight against a black backdrop.
8. Keith Moon, drummer for The Who, died on September 7, 1978 at the age of 32. Which of the following statements are true?


Answer: Both of these statements are true

The night before Moon, The Who's inimitably wild drummer, died, he had attended a benefit dinner and London premier of the movie "The Buddy Holly Story." Moon was a guest of Paul McCartney, who owned the Holly music collection at the time, and sat with McCartney at the dinner.

After returning from the movie, Moon took 32 pills that had been prescribed to wean him from alcohol, and died in his sleep. He was in the same bedroom in which singer "Mama Cass" Elliot had died in 1974.
9. Jim Morrison of the Doors died in Paris in 1971. Why had he gone to Paris?


Answer: To work on his poetry

The Doors surged to international fame with the release of their 1967 debut album, and Jim Morrison, their charismatic and enigmatic lead singer, received most of the attention. A 1969 arrest for lewd behavior at a Miami concert, and the 1970 trial, helped push Morrison to slow down and focus his energies on his writing and poetry.

In early 1971, he moved to Paris, hoping to temporarily escape the rock star life and aura that surrounded him in the United States. He was found dead in his bathtub on July 3, 1971. With no signs of foul play, no autopsy was performed, and the official cause of death was listed as "heart failure," although several other theories have been raised as to how he died.
10. Which singer/songwriter's lyrics were quoted by Kurt Cobain of Nirvana in his suicide note? 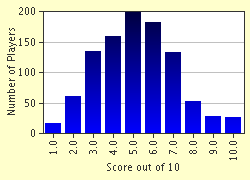