I am a young person who oddly adores Bob Hope, who is known as the "most honored entertainer" according to Guinness. I have has seen at least 30 of his movies, thus, I hope this quiz is challenging to those of Hope's generation.

Quiz Answer Key and Fun Facts
1. In what movie does Bob Hope play the sole heir to the throne of a fictitious country?

The title of the 1947 film cheekily suggests that "Where There's Life", there's Hope.
2. Which singing actor was Bob Hope's co-star in the "Road To" movies?

Bing Crosby was also insinuated in many inside jokes in movies that Bob Hope starred in, most notably in "The Princess and the Pirate," where Bing Crosby steals the girl, played by Virginia Mayo, away at the very end. The witty exchanges between the two men made the films even more dynamic, due to the frequency of their ad-libbing in the movies.
3. What gorgeous actress served as the source of rivalry between Bob Hope and his co-star in the "Road To" movies?

The lovely Dorothy Lamour creates a legacy of fueding between Bob Hope and Bing Crosby in the "Road To" movies. Crosby, of course, wins her almost every time. Although Lamour settles for Hope in "Road to Utopia", when the men are separated by a crack in the ice, with Lamour on Hope's side.
4. Which is not a movie that Bob Hope starred in?

Many "Road To" pictures were located in foreign countries, often creating a recurring plot, where the two schemers attempt to either outwit or survive that country's cultural norms, with Lamour as the exotic distraction.
5. Which 1980's movie, in which Hope makes a cameo appearance, features a plotline of two inexperienced schemers very similar to the co-stars of the "Road To" pictures?

The 1985 movie "Spies Like Us", starring Chevy Chase and Dan Aykroyd, was an hilarious take on the "Road To" movies, including some of the same techniques of distraction the pair would use to get out of danger. Bob Hope accidentally golfs himself into one of the scenes of the movie.
6. Bob Hope is most remembered, and will always be remembered, for his signature song which he first sang with Shirley Ross in his debut appearance in "The Big Broadcast of 1938." What is this song?


Answer: Thanks For The Memory

This culturally recognizable song has already been featured in virtually all television biographies of Bob Hope, and seems reminiscent of nostalgia for old Hollywood pictures such as the star-studded cast of "The Big Broadcast of 1938".
7. Hope is often a master of impersonations, and claims to be "Sylvester the Great," a "man of seven faces" in "The Princess and the Pirate." What classic, famous character does Bob Hope impersonate throughout one of his other movies?

Including generally good critical reception, the 1955 picture "The Seven Little Foys," also starring James Cagney, was nominated for Best Screenplay in 1956. Although "Paleface", a box office success, won an Academy Award for the song "Buttons and Bows", which Hope sings in the movie.
9. In which of the following movies did Bob Hope not appear?

Although Bob Hope rubbed elbows with many presidents, including joining them in his favorite sport, golf, Hope only acted in "My Favorite Spy," "My Favorite Blonde," and "My Favorite Brunette,". All of these are hilarious comedies.
10. Which is NOT one of the several films in which Lucille Ball and Bob Hope were co-stars?


Answer: How To Commit Marriage

Bob Hope had numerous on-screen appearances and performances with Lucille Ball, and they had tremendous chemistry as a comedic pair. My favorite film with the two is 1949's "Sorrowful Jones", arguably one of Hope's best movies.
11. In 1956, Bob Hope made his first and only appearance on "I Love Lucy". In this episode, how did Hope happen to meet up with Lucy?


Answer: He runs into Lucy in a locker room at Yankee stadium as himself.

The episode was entitled "Lucy and Bob Hope" and first aired on October 1, 1956.
12. In what film noir spoof, starring Hope, Lamour, and Lon Chaney Jr., does Bob Hope play an aspiring, but clueless detective?

The 1947 film, "My Favorite Brunette", features Hope as a baby photographer who gets caught up in the mysterious plot and identity of a detective, when he promises to overlook his detective friend's office. This movie is a great combination of mystery and comedy with a suprise cameo as well!
13. In what 1948 spoof of Western films does Bob Hope play Painless Pete Potter, a dentist?


Answer: Caught In The Draft

The movie title "Caught in the Draft" is another toungue-in-cheek title so common in Hope's movies, which again has Hope playing an ineffectual coward playing the unlikely hero.
15. In what movie does Bob Hope play the role of the Mayor of New York?

Hope plays the easily corrupted mid 1920's Mayor Jimmy Walker in the 1957 movie. This toned down role, in comparison to the real story, is probably the most uncomedic and dramatic Bob Hope has ever played.
16. "The two stars of "The Cat and the Canary" find love and laughter in a haunted house!", is a tagline from a 1940 Bob Hope movie. Which movie is it from?

"The Ghost Breakers" is a silly horror spoof where Hope, paired with Paullette Goddard, encounter ghosts and scary zombies.
17. Here's some general questions about Bob Hope, the man. What kind of award did Bob Hope not win?

Although Bob hope won an innumerable amount of awards, many of them honorary, including a knighthood, he did not win an Oscar.
18. Bob Hope performed for American troops all over the world. For which war did he perform for American soldiers?

During the WWII, Hope recalls his plane being shot at when he was on his way to perform for the troops, and his response to this threat was "I have critics everywhere."
19. What is Bob Hope's real name?

Bob Hope, sometimes known as Robert Hope, was born with the name Leslie Townes Hope. In his films, Hope's name is often a hyperbolic pseudonym like "Sorrowful," "Fearless" or "Sylvester the Great," covering up less desirable names such as "Humphry," which I believe, points to his less desirable real name.
20. What is Bob Hope's country of birth?

Although he has become a symbol of Americana, Lesley Townes Hope was born May 29, 1903 (most probably) in Eltham, England.
Source: Author serapheim 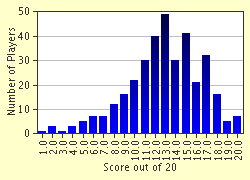 Here are a few quizzes written by myself and others that have a connection to my favorite actor and singer, Bing Crosby. Enjoy!


Other Destinations
Explore Other Quizzes by serapheim