This is multiple choice. I will give the person's birth name and you decide who the well known person is. Enjoy!

Juan Peron was succeeded in office by his third wife Isabel, who later was ousted by the military in Argentina.
2. Who is Mary Cathleen Collins?

John Garfield was an actor who was popular in the 1940s.
4. Who is Baldemar G. Huerta?

Freddy Fender has had three successful careers. He was a Hispanic cop in the 1950's, country pop star in the 70's and a member of the Grammy winning Texas Tornadoes in the 90's.
5. Who is Albert Einstein?

Al Brooks gained pop-culture fame for the short-subject directoral debut. In 1975 he won a Grammy for his album, and he wrote for Saturday Night Live.
6. Who is Issur Danielovitch?

Kirk Douglas won the Honorary Award of 1996 for 50 years as a creative and moral force in the motion picture community, and Honorary Golden Berlin Bear at Berlin International Film Festival of 200l.
7. Who is Anne Francis Robbins?

Nancy Reagan is the wife of our 40th president.
8. Who is Joel Katz?

Joel Grey came from an acting family, and his daughter is Jennifer Grey. He is best known for his role as the sinister Emcee in 'Cabaret'.
9. Who is Agnes Gonxha Bojaxhiu?

In 1950 Mother Teresa founded her order Missionaries of Charity, providing free service to the poor and the unwanted. In '52 she established a home for the dying destitute and soon her first orphanage. In '62 she received the Pandra Shri prize for 'extraordinary services', and in '79 the Nobel Peace Prize.
10. Who is Leslie Hornby?

In the 1960's Twiggy was a very thin young model, but as the years have passed she has become a respected singer and actress.
11. Who is Nathan Birnbaum?

George Burns started smoking cigars early in his vaudeville days, because he thought it made him look successful.
12. Who is Richard Starkey?

Ringo Starr joined the Beatles on August 18, 1962 just 18 days before their scheduled recording session for EMI at Abbey Road.
13. Who is Yvonne Vaughan?

After all her success, Donna Fargo and her husband Stan Silver were declared bankrupt in 1991.
14. Who is Alphonso D'Abruzzo?

Alan Alda drew on his own time in the army in 1950's for his role in 'Mash'. I got along well with everyone on the show except Larry Linville.
15. Who is Stuart Leslie Goddard?

Due to illness in the 1990's Adam Ant had to give up his music career but focuses now on acting.
16. Who is Natalia Nikolaevna Zakharenko, sometimes also referred to as Natasha Gurdin?

Natalie Wood's career took off when she was 9 with 'Miracle on 34th St.'. By the time she was 12 years old she made 14 movies. Natalie tragically drowned while on a yacht with her husband and friends. Her family still has trouble coping with this.
17. Who is Schmuel Gelbfisz?

Goldwyn with his partner Louis B. Mayer in 1925 were a part of a long line-up of Canadians who helmed Hollywood's picture industry.
18. Who is George Robert LeRoy Parker?

On September 19, 1900 a gang robbed a bank, and escaped. Later they were identified at the Butch Cassidy gang who were known as the 'Wild Ones'.
19. Who is Lucille La Sueur?

'Mommie Dearest' was born into a very poor family, and at the time of her birth her parents were separated. She became a big star in the 30's but in the 40's her star began to fade, because she was so difficult to deal with. She came back in the 50's. In later years she became more mellow, but still had a strained relationship with Christopher and Christina who she left out of her will.
20. Who is Daniel Michaeli?

Danny DeVito went to the Wilfred Academy of Hair and Beauty Culture before attending the American Academy of Dramatic Arts. His film debut was 'One Flew over the Cuckoo's Nest' in 1975.
Source: Author finlady 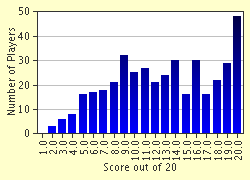 Related Quizzes
1. Skeletons in the Closet Average
2. What's in a Name? Average
3. They Were A.K.A. Average
4. Celebrities Named After Greek Legends Easier
5. What's My Name #2 Average
6. Who's In A name? Part 1 Difficult
7. What's In A Name? Average
8. Celebrity Real Names 2 Average
9. Who's That Difficult
10. What's My Real Name? 2 Average
11. The Name Behind the Name Average
12. Nom De Guerre Very Easy


Other Destinations
Explore Other Quizzes by finlady