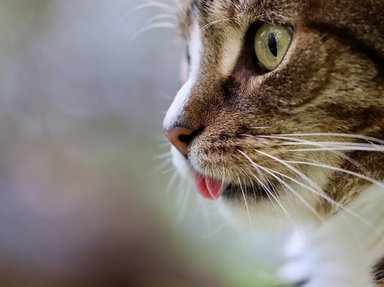 This quiz is about Boy and Girl. These two lions played the parts of Elsa and her mate. Of course, there were other lions who played these parts, but these two are the most notable. Have fun!

Share on Facebook
Share on Twitter
Share by E-Mail
Author
DakotaNorth
Time
4 mins
Type
Multiple Choice
Quiz #
51,040
Updated
Dec 03 21
# Qns
10
Difficulty
Tough
Avg Score
5 / 10
Plays
514
This quiz has 2 formats: you can play it as a or as shown below.
Scroll down to the bottom for the answer key.

Quiz Answer Key and Fun Facts
1. How old were Boy and Girl when they were first brought to George Adamson for him to train for the movie "Born Free"?

Boy and Girl were found by the Scots Guards in Marsabit when they were a few days old. They were apparently abandoned. Sergeant Ronald Ryves was their caretaker.
3. Where were Boy and Girl destined to go to after the filming of the movie?

According to the book "My Pride and Joy" by George Adamson, they were destined to go to Whipsnade Zoo once filming was ended.
4. What reserve were Boy and Girl sent to be rehabilitated?

Boy and Girl mated twice while George Adamson was in Meru, before he had to remove Boy from the reserve. They had a total of four cubs, one died shortly after birth. The remaining one from the first litter was adopted by George Adamson who named the abandoned cub Sam. Sam was killed by a rogue lion which George called Black Mane. George eventually shot and killed Black Mane for the murder of Sam. Boy and Girl then had a second litter and this time both cubs survived.

Their names were Maya and Juno.
6. Boy attacked an 8 year old human boy.

In 1969, Boy attacked 8 year old Mark Jenkins. This happened when George's assistant Johnny Baxendale was stopped by Peter Jenkins, who was in his car with the windows open. Peter Jenkins was also the park director of Meru. Peter had his family with him when he stopped Johnny, who had Boy with him. Boy was sitting lazily on the bonnet of Johnny's landrover, when Peter stopped him. Boy all of sudden got off the bonnet and flew like a bullet at Peter's car. Boy bypassed Peter and went for little Mark, biting him through the arm and holding his head with his paws. Luckily, Peter had the presence of mind to put his foot on the gas pedal and, with Boy being dragged, sped away as fast as he could. George Adamson explained that all big cats have a dangerous fascination with little kids, and to them little kids are fair game. George felt so bad about this that he asked Peter Jenkins if he should shoot Boy. Peter at first said yes, then had a change of heart.
7. Why was Boy removed from the reserve?


Answer: He was found emaciated with porcupine quills and severely broken foreleg

In 1969, a few months after the incident with little Mark Jenkins, Boy was found by Joy Adamson near the park headquarters lying under a bush. He was fearfully emaciated with porcupine quills sticking out of his forlegs and one right below his eye. He also had a severely broken foreleg. George was told to take him out of the park because Jenkins did not want a handicapped lion roaming around. Boy's leg was operated on in George's camp by the Harthoorns. George then brought Boy to Naivasha, where Joy had bought a house, to recuperate.
8. While Boy was recuperating, who was Boy's caretaker?

While Boy was recuperating at Naivasha, Stanley, a member of the Meru tribe and friend of the Adamsons, cared for Boy.
9. What year was Boy taken to Kora National Reserve?

Boy was taken to Kora National Reserve in 1970. At that time George also released a zoo born lion named Christian.
10. Boy was killed because he had became a man-eater.

Sadly, in 1971, Boy was shot and killed by George Adamson for killing Stanley, his former caretaker at Naivasha. Piecing together what happened from his cook, Kimani, and from the spoor left by the killing, George came to the conclusion that Stanley had taken it upon himself to go look for honey.

When Boy had returned to the camp and finished drinking, he noticed someone moving about on the other side of the camp and had gone to investigate. George said that Boy probably didn't recognize Stanley or that probably Stanley didn't recognize Boy. Whatever had happened, it seemed to George that Stanley didn't stand his ground with Boy, an action which would have checked him, but instead Stanley had turned and ran for the safety of the gates. Boy, like all cats wild and domestic, would have found the running figure irresistible. Stanley's body was taken by the police and buried in an unmarked grave in Garissa. Boy, who was killed by George Adamson, was buried in a sandy riverbed that George had named Elephant Lugga, under a shady tree.

In 1989, when George Adamson was murdered by poachers, he was buried next to Boy. All information can be found in the books "My Pride and Joy" by George Adamson, and "The Spotted Sphynx" by Joy Adamson.
Source: Author DakotaNorth

This quiz was reviewed by our editing team before going online.
Any errors found in FunTrivia content are routinely corrected through our feedback system.
Related Quizzes
1. Felines In Fiction Average
2. Cats In Literature and History Tough
3. Famous Cats And Their People Difficult
4. I Tawt I Taw a Puddy Tat! Easier
5. How Catty of You Average
6. Feline Groovy Average
7. King of the Cats Cafe Easier
8. Famous Cats Average
9. Can't Get Enough of Those Furry Felines! Average
10. Famous Cats Average
11. Famous Cats Average
12. The Year of the Tiger Easier