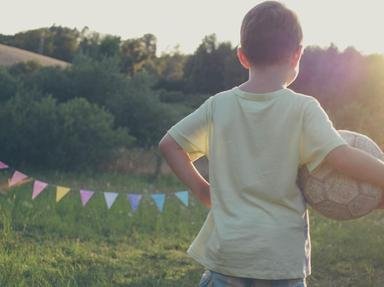 Millions of people of all ages and from all over the world play golf. Come learn about this pleasant sport.

Quiz Answer Key and Fun Facts
1. Which club would you use to hit the ball the furthest?

A tee is usually wood or plastic. It gets the ball off the ground so that it can be hit more cleanly. In the old days before the tee was invented, golfers used to build up a little mound of sand to place the ball on. The tee can only be used on the first shot.
3. The grass between where the golfer takes a swing at the ball and the hole is kept nicely mowed. Golfers try to land their shots in this area because they then have a better surface to make their next shot from. What is the name of this area?

The fairway grass is kept mowed to a uniform height. It is easier to hit a ball that is in the fairway. The area outside the fairway is called the rough. Grass in the rough is higher and is not mowed as often. Sometimes there are also trees and bushes in the rough to make it harder for the golfer whose ball lands there to make a good shot.
4. Which of these clubs will hit the ball the shortest distance?

Of these choices, the wedge is the shortest club. The shorter the club, the shorter the distance it can hit the ball. On the other hand, with a shorter club you can usually hit the ball closer to where you are aiming. Therefore wedges are used when a golfer is trying to put the ball close to the hole.
5. Most holes are straight. Some holes, however, have a bend in them. What is the bend called?

They are called doglegs because they look like a dog's leg. The fairway goes straight for a distance, then it goes a different direction to the hole. Dogleg holes require more strategy from the golfer. He or she has to think about either following the dogleg around or trying to hit the ball over the corner of it.
6. A golf course designer may place special things on some holes to make them harder to play because the golfer has to try to keep his or her ball out of that area. Which of the following is something a course designer might place?

Placing any of these on a hole requires the golfer to hit the ball more accurately to avoid it. A ball in a sand trap is hard to hit and the sand also slows the club down so the ball cannot be hit as far. Trees will sometimes get in the way of the golfer's swing. Also if a tree is in the way, the golfer may be unable to hit the ball straight at the hole. If the ball goes in a pond or other water hazard, the golfer loses a stroke and has to drop a ball on the other side of the water from the hole for his or her next shot.
7. What does it mean when a hole is described as a Par 4?


Answer: It should take four shots to put the ball in the hole

A birdie is one stroke less than par. An eagle is two strokes less than par. A bogey is one stroke more than par. Hat trick is a general sports expression, one meaning of which is scoring three goals in a game.
9. Once you are on the green (the short grass around the hole) what is the term for trying to hit the ball in the hole?

The club used for putting is called a putter. The putter has a flat face so that it does not hit the ball in the air. When putting the ball should roll along the ground to the hole.
10. For safety, which of the following should a golfer have with them and/or wear?

A round of golf is 18 holes. It will take at least three hours and probably longer to play 18 holes. That is a lot of time to be out in the sun. Sunscreen should be used. A golfer should have water to drink also because he or she will use a lot of energy walking the course. Any time you are outside where there is grass, water, trees and bushes there can be mosquitoes and other bugs.

The golfer should have bug spray to keep from being bitten.
Source: Author deputygary 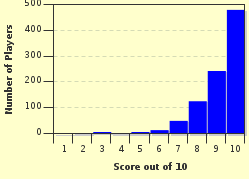