On the Run From Mythical Monsters Quiz

You set out on an adventure only to find a monstrous, mythical mixture of beasts! If you can tell your gorgons from your griffens then you may survive this quiz!

Quiz Answer Key and Fun Facts
1. Our first monster is not someone you would like to meet if you are afraid of snakes. One look in the eye and she will turn you to stone!

Medusa is a type of mythical monster known as a gorgon. She turned many into stone before she was killed by the brave warrior Perseus.
2. With your eyes closed you dig your way out and opening your eyes you see a dog. But this dog you do not want to stroke. This huge three-headed dog is the guardian of the underworld.

Instead of keeping people out, this dog keeps people in. It doesn't let any of the souls escape from Hades after they cross the river Styx (as in Greek mythology). Cerberus was killed by another Greek hero, Herakles (also known as Hercules).
3. Throwing a nearby bone to distract the dog you slip away only to see another odd creature. You should know not to try and outrun this beast as although it has the torso of a man it has the legs of a horse.

A good, well-respected centaur was Chiron. Chiron was a great teacher and one of his pupils was the famous Achilles. Achilles was a great warrior, but had one weakness, his heel. This was supposed to be because when he was a baby he was dipped into the river Styx by his mother, making him invulnerable, apart from his heel which did not enter the river.
4. You are now spotted by a one eyed giant who has escaped from his home, Tartarus. Before this monster gets the chance to crush you, you use your advantage of speed to escape.

Cyclops usually had their one eye centred on their forehead.

In Greek mythology, it is said that after being released from their home of Tartarus, the Cyclops provided Zeus with his famous thunderbolt and Poseidon with his mighty trident.
5. You now meet some familiar animals, a snake, a goat and a lion. But wait! They're all joined together! What animal are you looking at?

As well as being a scary looking beast, the Chimera could breathe fire!

Pegasus was not a monster, but a winged-horse which assisted Bellepheron, the warrior who killed the Chimera.
6. Knowing none of the animals in the previous question are particularly strong swimmers you decide to jump in the water and swim away. You come to an island called Crete and dry off. However, you are once again being chased, this time by a horned beast. Maybe it's something to do with your red towel.

The story of the Minotaur is an interesting one indeed.

After failing to sacrifice a bull in the name of the god Poseidon, King Minos was punished by having his wife fall in love with the bull. The fruit of Minos' wife's (Pasiphae's) love for the bull was the Minotaur, who was to be kept in the labyrinth.
7. You meet a man and ask for help as it is getting late. However, as the full moon begins to show, this passerby grows large sharp teeth and becomes covered in hair. You have heard about these animals and so you know you have to get away as soon as possible! What kind of creature is he?

Lycanthropes are very commonly known as werewolves in folk tales.

Making their grisly change during a full moon, it is said they can be killed by a silver bullet.
8. You are tired from all this running you have done and you fall asleep. When you wake up you think your luck has changed as you see a bounty of food. However, as you go to eat the food it is snatched away from you by what looks like a woman but also a bit like a bird. What creatures are pestering you?

Harpies tormented a king called Phineas after he revealed to much about the gods to man.
His food continued to be stolen by these critters until the arrival of Jason and the Argonauts, who chased the Harpies off.
9. You manage to salvage some of the food and sprint away before the creatures can take it from you. However, you almost choke on your food as you see a huge water serpent with not one, not two but nine heads! Before you can find out how hard one of its nine mouths can bite you scamper. From what mythological beast are you running?

The Hydra was a sea serpent and was also killed by the warrior Herakles, famously depicted in the Disney film "Hercules".

The Hydra was in fact one of Herakles' twelve labours. These were a set of tasks he needed to complete as a punishment for killing his wife and child.
10. Not keen on seeing any more monsters you ask a sailor if you can board his ship and take you home. You have to write this down as he is deaf but when you do he is more than happy to help you. On the way home you pass an island form which an enchanting sound is coming from. However, the sailor does not let you take the boat over to the island. Let's just say it's a good job he is deaf! Which creatures have you just sailed past?

Sirens are often seen in Greek myth as "bird-women".

It is a good reason you escaped them because many ships which were drawn to their beautiful sounds were usually destroyed. 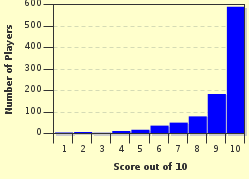