The Greek Gods and their Deeds Quiz

A long time ago the people of Greece believed that their gods and goddesses where responsible for everything that happened in the world. Answer the questions and find out more in the info.

Quiz Answer Key and Fun Facts
1. The Ancient Greeks believed that their gods lived at the top of a mountain called Mount Olympus. Which god rules over all the other gods?

Zeus is said to have become the ruler of the gods by drawing lots with his brothers Poseidon and Hades after they overthrew their father, Cronus, and the Titans.

Zeus is lord of the sky, god of rain and his weapon is the thunderbolt which, when thrown, is always returned to him by an eagle.
2. What was Apollo's most important daily task?


Answer: Driving his Sun chariot across the sky

He is also the god of truth and cannot tell a lie or break a promise. One tale tells of his young son, Phaethon. Phaethon travels to Mount Olympus and meets his father for the first time. Apollo is so pleased he promises his son anything he wants.

Phaethon tells his father that he wants to drive his sun chariot and Apollo is horrified. He begs his son to change his mind saying how frightening and dangerous it would be, but, Phaethon will not change his mind.
So Apollo sadly agrees and the boy gets his wish.

The winged horses soon realise that it is not their master holding the reins. They run wild and out of control driving the sun high into the heavens so the planets begin to burn and the Earth grows cold and dark. Then they dive down taking the sun too close to the Earth causing searing heat and fires.

Zeus, who is watching from his palace, sees the Earth burning and throws a thunderbolt at Phaethon. The boy is thrown out of the chariot and falls to his death. The horses are returned to their stable and Apollo weeps for his foolish son.
3. When Poseidon, the God of the sea, is in a bad mood he uses his trident to do what?


Answer: Shake the Earth and cause shipwrecks

Poseidon could be a very moody god, just like the sea can be sometimes, which is why you have to be careful swimming or when you are on a boat. When Poseidon was in a good mood he would create calm seas and soft breezes to help sailors.

One story tells of his love for Demeter, the goddess of the harvest. She didn't want to make him moody by not returning his love so she asked him to make the most beautiful animal in the world, to keep him busy.

He made the horse but it took many attempts and he created many other animals a long the way before he created the horse. By this time he had forgotten about Demeter.

Did you know that the hippopotamus is known as the river horse? Maybe this was one of his first attempts!
4. Aphrodite is best known for being the goddess of love and beauty, but in one myth she is accused of starting the Trojan war. But who did start it?


Answer: All the answers could be right

The three goddesses Aphrodite, Hera and Athena where enjoying a wedding when Discord, annoyed at not being invited, threw a golden apple to them which had the words "to the fairest" written on it.
The three goddesses argued and then asked the god Hermes to fetch the first human (or mortal as they were known as) he came across to decide who should keep the apple.

A shepherd boy was found called Paris, but, unknown to them, he was also a prince of a place called Troy.

Aphrodite was very beautiful but did not want to take the chance of losing, so she whispered to Paris that she would tell him how to win the most beautiful woman in the world, who happened to be Helen, the wife of the King of Sparta.

Paris did steal Helen and it caused a ten year war in which the gods took different sides. Hera and Athena were unlikely to support him as he didn't give them the apple!

Discord is also known as Eris, the sister of Ares, the god of War.
5. The goddess Athena was Zeus' daughter. How was Athena born?


Answer: She leapt fully grown out of her father's head

Athena was the goddess of wisdom and pictures usually show her with an owl on her shoulder.

One myth tells of Athena and her uncle, Poseidon, wanting to be the chief god of a Greek city. A contest was held to see which God could give the best gift to the people who lived in the city.

Poseidon struck the ground with his trident and a spring of water appeared but the water was salty like sea water.

Athena created a olive tree which would provide wood, food and oil.

The people decided they wanted Athena as their god and named the city Athens.
6. Demeter was the goddess of the Earth and the harvest. Who took her daughter, Persephone, and made her his queen?


Answer: Hades, the God of the underworld

Hades had seen Persephone and wanted her as his queen but who would want to live underground all the time? So one day when Persphone was gathering flowers in a meadow, Hades sprung from a hole in the ground on his chariot and grabbed her. The hole closed behind him.

When Demeter discovered her daughter was missing she was very upset and went searching for her. Demeter forgot about looking after the Earth. It grew dark and cold, plants stopped growing and crops died.

Zeus saw that people would go hungry if their wheat and vegetables didn't grow so he sent Hermes (the messenger god) to the underworld to get Persephone. Persephone was taken back to her mother but she had eaten six pomegranate seeds while she was in the underworld, which meant for six months of every year she had to return and her mother would again start to weep and forget to look after the earth

This is how the ancient Greeks explained autumn and winter.
7. The goddess Hera was the queen of the Olympian gods and Zeus' wife. She was a very proud woman. Which bird was associated with her?

Hera was also the goddess of marriage and birth. She believed she was more beautiful than Aphrodite and was very angry when when she was not given the golden apple for "the fairest one".

Hera was also very jealous of the children Zeus had with mortal woman. One of these children was called Heracles. Hera arranged for two large serpents to find their way into the baby Heracles' cradle but his gift from his father was strength and Heracles killed the serpents.

Hera could also be kind and helpful. She helped Jason in his adventure to find the golden fleece.
8. Apollo had a twin sister called Artemis. He is associated with the Sun and his sister is associated with which one of the following?

Artemis was said to shoot arrows of moonlight to the Earth from her silver chariot.

Pictures of Artemis show her wearing a moon crescent above her head.
She is also known as the goddess of the hunt for wild animals but later she became their protector. Wild animals or beasts cannot harm her because of her magical silver sandals.


Answer: Being the messenger of the gods

Hermes was kept very busy delivering messages from one god to another and to mortals. What's more, he didn't have e-mail!

He was also the patron god for travellers, merchants and of luck, and it was lucky that Hermes had wings or he would never have kept up with all his daily tasks!

Ancient Greeks also believed that Hermes was responsible for showing the dead the way to the underworld.
10. Eros was thought to be the son of Aphrodite and Hermes. He carried a bow and arrow. What happened to a mortal or a god/goddess when he shot them through the heart with an arrow?


Answer: They fell in love

Ancient Greeks believed that when they fell in love it was because Eros had shot an arrow at them. Even the gods were not immune to his arrows.

One story tells of how Eros was upset when Apollo laughed at his archery skills. Eros shot an arrow at Apollo making him fall in love with a nymph called Daphne, knowing that Daphne didn't like Apollo.

When she realised that Apollo was in love with her she prayed to be allowed to escape and was turned into a laurel tree.

I hope you have enjoyed this quiz and will want to learn more about the ancient gods of Greece.
Source: Author fontenilles 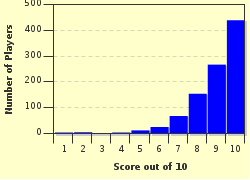 Related Quizzes
1. The Roman and Greek Gods Easier
2. American Folk and Legends Very Easy
3. King Arthur & Friends Easier
4. Zeus and Other Greek Gods Very Easy
5. Tales of the Unicorn Average
6. Just What Do You Think This Is? Easier
7. Gods and Heroes of Greek Mythology Easier
8. It's All Greek To Me Very Easy
9. Over at the Frankenstein Place Easier
10. Demons and Creatures of Mythology Easier
11. Once Upon a Time in Rome Average
12. Tales of the Greek Hero Easier


Other Destinations
Explore Other Quizzes by fontenilles