Let us travel back in time and introduce ourselves to all the characters who were part of the legend of King Arthur.

Quiz Answer Key and Fun Facts
1. What was the name of King Arthur's father?

Uther Pendragon was the legendary King of Britons during the late 5th century and was father to the future King Arthur. It is believed he took his name after seeing a dragon-shaped comet in the night sky. Most of his life was spent defending his country from marauders, especially from Saxony and Ireland.

He lived towards the north of Britain until he met and fell in love with a lady from Cornwall.
2. What was the name of King Arthur's mother?

There is not much information about the Lady Igraine, but we do know that she lived with her husband, Gorlois, the Duke of Cornwall, at Tintagel Castle. Tintagel was, and still is, an imposing castle high above the cliffs with waves pounding the rocks below. She had three daughters with Gorlois but he was killed in battle. After his death, she married King Arthur's father.
3. Who was the alleged half-sister of King Arthur?

Morgan le Fey is also known by other names including Morgaine and Morgana. It is believed her name was taken from an old Welsh word "morgen" meaning "sea-born". A person who is "fey" is said to have fairy-like qualities. Her father was Gorlois, Duke of Cornwall. Morgan became a sorceress and later became the arch enemy of King Arthur after he killed a knight she was in love with.

She was often underhanded and used trickery to get what she wanted.
4. What was the name of the wizard who lived in a cave below Camelot Castle?

Merlin was a legendary wizard known throughout Arthurian legend. He was alleged to have been a prophet and advisor to King Arthur. He arranged for young Arthur to be brought up by foster parent, Sir Ector. He also became the young boy's tutor and his magical skills allowed him to influence the future of Camelot.
5. Who made Excalibur, the magnificent sword that Arthur used?


Answer: The Lady of the Lake

It was the Lady of the Lake who gave King Arthur the great sword, Excalibur. The sword was given magical properties to protect the King whenever he used it. Over the years, the legend of Excalibur has become entwined with another legend; that of the sword in the stone. "Whoso pulleth out this sword of this stone and anvil, is rightwise king born of all England".
6. What was the name of King Arthur's wife?

There were many knights of the Round Table and they were all considered equal. All were expected to swear to a code of chivalry. This meant they were expected to follow rules of conduct including bravery, honour, courtesy and great gallantry towards womenfolk. Sir Lancelot was the most famous of all the knights and he was often portrayed as very brave and daring, especially when his love affair with Queen Guinevere was discovered.
8. According to Arthurian legend, who was the keeper of the Holy Grail?

Many knights of the Round Table went in search of the elusive Holy Grail without any success. The Holy Grail was a chalice; a much sought-after Christian relic which was allegedly the cup which Jesus Christ drank from during his last supper before he was crucified. Joseph of Arimathea was the person responsible for burying Jesus Christ, and legend says that he brought the Holy Grail with him when he visited Britain.
9. What was the name of King Arthur's horse?

When King Arthur found out about the affair between Queen Guinevere and Sir Lancelot, he rode to the castle owned by Lancelot and waged war. Horses were often used for war, for hunting or for sporting competitions called jousts. Llamrei, Hengroen and Passelande were all horses which have been linked to the legend of King Arthur.
10. What was the name of the traitor who killed King Arthur at the Battle of Camlann?

As King Arthur and his men battled against Sir Lancelot, Mordred went behind his back and attempted to take over the throne. Mordred is believed to be have been King Arthur's illegitimate son. King Arthur rode back to Camlann where a great battle took place between Arthur and Mordred. Camlann is believed to be near modern day Salisbury Plain. King Arthur was mortally wounded and carried away by three faerie queens on a barge through the mists to the magical island of Avalon.

His final wish was for his sword Excalibur to be thrown back into the lake where he first obtained it from the Lady of the Lake.
Source: Author Plodd 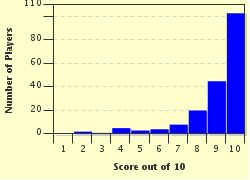 Related Quizzes
1. Mysterious Monsters Very Easy
2. Myths and Legends of the British Isles Very Easy
3. Just What Do You Think This Is? Easier
4. Zeus and Other Greek Gods Very Easy
5. American Myths, Legends, and Heroic Stories Easier
6. Tales of Robin Hood Easier
7. The Legends of King Arthur Easier
8. The Greek Gods and their Deeds Easier
9. On the Run From Mythical Monsters Easier
10. Who's Who: Mythological Pairs Easier
11. Tales of the Table Average
12. Tales of the Unicorn Average