Nobody knows for certain whether King Arthur really existed but there are are some great stories about him and his court. How much do you know?

Quiz Answer Key and Fun Facts
1. King Arthur and the knights of the ___ table. Which word is missing?

It was usual for kings to have rectangular tables at their courts. The king would sit at the head of the table and the most important men would sit higher up the table. The significance of the round table was that everyone was seen to be of equal standing.
2. What was Excalibur?

In some stories King Arthur's sword Excalibur is said to have magical qualities. In others it is said to be 'The Sword in The Stone' which Arthur pulled from a rock to prove his right to the throne. As with all Arthurian legends no-one knows the truth.
3. Who was the magician at King Arthur's Court?

Merlin was the wise old magician who advised Arthur.
Gandalf appears in J R R Tolkien's "The Lord of The Rings".
Rincewind is the rather cowardly wizard in Terry Pratchett's "Discworld" series of books.
Schmendrick is a young wizard in "The Last Unicorn" by Peter S Beagle.
4. Guinevere was King Arthur's ___.

Guinevere was King Arthur's wife, making her his queen. There are several stories about her including the time when she was taken prisoner by Arthur's rival Melwas and held captive at Glastonbury for over a year. Her close relationship with some of the other knights is said by some to have helped bring down the Court of King Arthur.
5. Which one of these is thought to have been Arthur's father?

If Camelot ever existed no-one knows where in Britain it was located. Several places lay claim to being the site but it was probably a fictitious place.
Stormwind Keep is a castle in the popular online game "World of Warcraft".
Cawdor castle is found in Scotland and is the setting for much of Shakespeare's play "MacBeth".
Castell Coch is a 'fairy-tale' castle found near Cardiff in south Wales.
7. One of the most famous stories about King Arthur's knights is their search for the Holy Grail. What is the Holy Grail?


Answer: A cup or plate

The Holy Grail was thought to have been used by Jesus Christ at The Last Supper and so had huge religious significance. It is often depicted as a cup or chalice, sometimes as a plate or dish. King Arthur's knights would have been extremely pleased to have found such a prize but they never did (and neither has anyone else).
8. Which of King Arthur's knights did battle with The Green Knight?

Sir Gawain is sometimes said to be Arthur's nephew and is always portrayed as one of the most honest and chivalrous of the knights. The Green Knight offers this challenge to Gawain: that Gawain can strike The Green Knight as hard as he likes as long as the Green Knight can return the same blow in one year's time. Gawain promptly takes his axe and chops the knights head off. That should be that you might think but no - The Green Knight picks up his own head and with a reminder to Gawain about his promise leaves the hall! Does Gawain keep his promise? Does The Green Knight return the blow? That would be telling; find the story and read the ending.
9. When Arthur was wounded in battle and close to death he gave his sword to one of his knights. What did he tell the knight to do with the sword?


Answer: Throw it into a lake

There are several different versions of this but they all follow the same theme. Arthur was mortally wounded and asked Girflet to throw the sword into the lake. Girflet has two attempts at doing so but fails both times. A dying Arthur rouses himself and summons enough energy to fling the sword far into the lake.

A hand (usually represented as The Lady of the Lake) appears and catches the sword before taking it down into the depths.
10. Which island is said to be the last resting place of King Arthur?

Legend has it that King Arthur was taken to the island of Avalon to (hopefully) recover from his wounds after being injured fighting against his great rival Mordred at The Battle of Camlann. Some versions of the story say that Arthur died on Avalon and is buried there. Other versions claim that Arthur never really died but that one day he will return to vanquish his enemies.
Valhalla is the place where all Viking warriors hoped to go after death.
The Elysian Fields is the heaven in Greek mythology.
Duat is where dead souls first went to in Egyptian mythology.
Source: Author Mutchisman 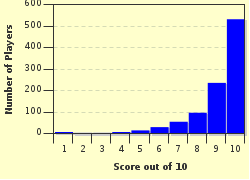 Related Quizzes
1. Mysterious Monsters Very Easy
2. Myths and Legends of the British Isles Very Easy
3. Just What Do You Think This Is? Easier
4. Zeus and Other Greek Gods Very Easy
5. American Myths, Legends, and Heroic Stories Easier
6. Tales of Robin Hood Easier
7. The Greek Gods and their Deeds Easier
8. On the Run From Mythical Monsters Easier
9. Who's Who: Mythological Pairs Easier
10. King Arthur & Friends Easier
11. Tales of the Table Average
12. Well that's just a bunch of nonsense! Very Easy