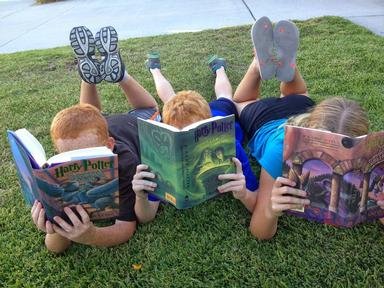 The Odd One Out: "Harry Potter"-Style Quiz

Three of the four answers provided in each question have something in common, the fourth does not. Your goal is to find this "odd one out". Questions refer to all seven books from the series by JK Rowling.

Quiz Answer Key and Fun Facts
1. Magic may be something a witch or wizard is born to do, but it is also something that needs to be studied properly. Which of these schools would you NOT go to, being a child with magical abilities?

Depending on the country they live in, young wizards are educated in the ways of magic either at Hogwarts School of Witchcraft and Wizardry (based in Scotland), Beauxbatons Academy of Magic (in France) or Durmstrang Institute for Magical Learning (somewhere in Eastern Europe).
Children of no magical abilities, like Dudley Dursley, may get sent to a private boarding school.
2. Once a young witch/wizard is admitted to Hogwarts, they need to acquire a number of magical items needed for their education: a wand, spell books, school robes etc. Which of these shops would NOT sell any of the items listed in the Hogwarts letter?

First and foremost a wizard needs a wand from Ollivander's: Makers of Fine Wands since 382 BC. Madam Malkin's Robes for All Occasions is the place to get school robes and cloaks. And the bookstore, Flourish and Blotts, sells school books for everyone - even the "Invisible Book of Invisibility" (if you can manage to find them!).
Though not useful for the acquisition of school supplies, Florean Fortescue's Ice Cream Parlour is most certainly a favourite among young wizards and witches.
3. Witches and wizards live amongst Muggles in many different places, towns and villages. Which of the listed does NOT have any Muggle inhabitants - making it the only all-magical settlement in Great Britain?

Hogwarts students in their third year and older enjoy their weekend visits to Hogsmeade and its many magical shops and cafés.
Ottery St. Catchpole is the village near the Burrow - the home of the Weasleys. Harry Potter's parents James and Lily lived in Godric's Hollow prior to their death. London, as you probably know, houses several magical places, such as Diagon Alley and Platform 9 3/4 - but is overall a non-magical city.
4. Entry into some parts of the huge Hogwarts castle isn't always as easy as just opening a door. The students from Gryffindor have to take care to remember the passwords the Fat Lady - the portrait on the entrance to Gryffindor tower - comes up with. Which one of these would NOT take you inside the Gryffindor common room?

The password "pine fresh" was given to Harry Potter by Cedric Diggory. It allows him entry inside the prefects' bathroom to solve the riddle of the golden egg.
5. One of the important subjects at Hogwarts is Defence against the Dark Arts. Because of the curse put on the DADA teaching post by Lord Voldemort, a new teacher fills it every year. Which of these wizards did NOT physically do so during the time Harry Potter was at school?

Lockhart, Lupin and Snape were DADA teachers during Harry's second, third and sixth year, respectively. In the fourth year Barty Crouch Jr. taught, pretending to be the auror Mad-Eye Moody. The real Mad-Eye spent the whole time a prisoner in his own trunk and never entered the classroom.
6. Similar to Muggles, many wizards like to keep pets. Hagrid, the Hogwarts gamekeeper, has a particular fondness for unusual and dangerous creatures. Which of these isn't one of Hagrid's pets?

Fluffy the three-headed dog, Buckbeak the hippogriff and Norbert the dragon were all at some points pets of the Care of Magical Creatures teacher. Arnold is the name Ginny Weasley gave her pet pygmy puff.
7. Dragons are creatures very few people (other than Hagrid) would want as pets. Harry Potter and his fellow Triwizard Tournament competitors experienced the savageness of mother dragons first hand. Which of these dragon species wasn't part of the First task?

Victor Krum faced a Chinese Fireball, Fleur Delacour a Common Welsh Green and Cedric Diggory a Swedish Short-Snout. The dragon left for Harry Potter to tackle was a Hungarian Horntail - known for being particularly vicious.
8. Halloween is a date connected with magic even in Muggle culture. Which Harry Potter-related event did NOT occur on October 31?

Ron Weasley is born on March 1. The other events all took place on a Halloween.
9. Each Hogwarts student has to pass their Ordinary Wizarding Levels (O.W.L.s) to continue their studies after fifth year. Which of the listed is NOT an O.W.L. grade?

The O.W.L.s have a six-grade-system. O (Outstanding), E (Exceeds Expectations) and A (Acceptable) are pass grades. Students who get a P (Poor), D (Dreadful) or T (Troll) fail the respective class and may not continue taking it on N.E.W.T. (Nastily Exhausting Wizarding Test)-level.
10. Magic can be fun! Wizards seem to enjoy joke shops - they can be found at both Diagon Alley and Hogsmeade. Which of the shops listed isn't one of these?

Zonko's is situated in Hogsmeade while Gambol and Japes and Fred & George's Weasleys' Wizard Wheezes can be found in Diagon Alley.
11. Alas, magic also has its dark side. Dark wizards use the so called Unforgivable curses to force their will on, punish or even kill their enemies. Which of the listed isn't one of them?

The Imperius Curse forces the person it's placed upon to do whatever the caster orders them to. The Cruciatus Curse tortures its victims, while Avada Kedavra is also known as the Killing Curse. Use of any of the three result in an sentence to the wizarding prison Azkaban.
The Flagrante Curse causes the object it is cast upon to burn anyone who touches it. It is used as a means of protection by Gringotts Wizarding Bank.
12. Good or bad, simple or difficult to grasp, knowledge of magic can often be found written down in books - just ask Hermione Granger! Muggles usually don't have access to the wonderful world of wizarding literature; however, a few exceptions exist. Which of these books is NOT available in a Muggle book store?

Complete with introductions from Albus Dumbledore, plus the occasional hand-written comment by Harry and his friends, copies of these wizarding bestsellers have been made available to non-magic people, with profits going to charity. Many young and not so young Harry Potter fans have enjoyed the Hogwarts schoolbook about amazing magical creatures, the library book of the most popular magical sport and the classic children's book of fairy tales.

However, so far no Muggle has read "Hogwarts: A History". And, as far as we know from Hermione, neither have Ron or Harry...
13. The ability to love - the "power the Dark Lord knows not" - saves Harry many times over. However, in everyday life feelings of jealousy can be very hard on a teenage boy in love. Which of these people has Harry NOT had reason to be jealous of for romantic reasons?

Though the Locket Horcrux tried to persuade Ron differently, Harry has never had a romantic interest in Hermione. His first love was Cho Chang, whose feelings for Cedric proved hard to handle even after his tragic death. Though Harry recognized his feelings for Ginny during the time she was dating Dean, he probably wasn't very happy about her having dated Michael, either.
14. Harry Potter was recognized by Death Eaters for his tendency of using the disarming spell "Expelliarmus" instead of more offensive incantations even in life-threatening situations. Which of the listed was NOT one of these cases?


Answer: against Snape after chasing him following Dumbledore's death

Harry's use of the spell in the graveyard duel lead to him being recognized as the true Potter amongst his look-alikes during the flight to the Burrow. Even in the final duel against Voldemort he would merely defend himself, resulting in the death of the Dark Lord by his own spell.
Harry's anger at Snape following Dumbledore's death made him wish to punish Snape, thus being the one on the offence. In that situation Snape was the one who disarmed Harry.
15. After years of fighting Lord Voldemort, Harry Potter gets to settle down peacefully and enjoy a normal life with his family. Which of these children isn't one of Harry and Ginny's offspring? 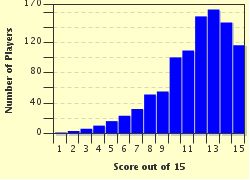 
Other Destinations
Explore Other Quizzes by mchem