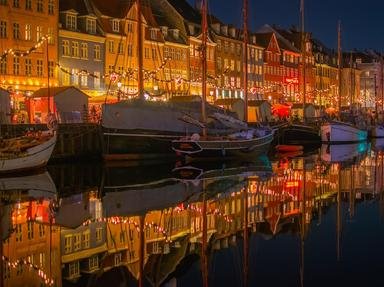 Why not come tour some of the sights of delightful Denmark?

Quiz Answer Key and Fun Facts
1. One of the most famous tourist attractions in Copenhagen is a modest little statue in the harbour modeled on the title character of one of Hans Christian Andersen's tales. A ballet based on which of these stories inspired Edvard Eriksen's sculpture?

Carl Jacobsen, whose father founded the beer company Carlsberg and named it after his son, saw a performance of a ballet based on "The Little Mermaid" in 1909, and commissioned Edvard Eriksen to produce a statue using the company's prima ballerina, Ellen Price, as a model.

She was indeed the basis for the head of the sculpture, but the sculptor used his wife Eline as the body model, since Ms Price refused to pose nude. The bronze statue was completed in 1913, and a copy was given to the city for public display.

The original has always been kept in a secret location, to avoid the vandalism which the public copies seem to attract on a regular basis. Since the work is still under copyright, its image cannot be displayed here - it is really quite a bit more attractive than is Hans Christian Andersen, pictured with the question.
2. While we're in Copenhagen, we really should visit this amusement park, the second oldest in the world. What is its name?

The oldest operating amusement park is actually Dyrehavsbakken (Deer Park Hill), located in another suburb of Copenhagen. Tivoli Gardens was originally named Tivoli & Vauxhall when it was set up in 1843; the name was intended to suggest a connection with the Jardin de Tivoli in Paris and the Vauxhall Gardens in London, both of them popular pleasure gardens featuring outdoor entertainment. Tivoli has always featured a variety of attractions in the form of rides and entertainment, including one of the world's oldest operating wooden roller coasters.

A recent addition was the Star Flyer, a ride in which participants sit in swing chairs that twirl around at a height of 80 m (260 ft), giving spectacular views if you can keep your eyes open. Walt Disney used Tivoli as one of the sources of inspiration in the development of the original Disneyland.
3. This boat floating in Nyhavn canal is named Baadteatret. What would you expect to find if you visited it?

This 19th century boat was originally used for loading and unloading cargo from larger vessels, but has been transformed into the only sailing theatre in Denmark. It originally travelled around the Stockholm archipelago, but now floats in a picturesque location in Copenhagen, and is run by the Danish Theatre.

It features a range of theatrical performances, with an emphasis on new Danish plays, many of which are written especially to be performed on Baadteatret (a name meaning Boat Theatre).
4. While we're in Copenhagen, let's visit Noma, a restaurant that was called the world's best in some food guides, despite 'only' having 2 Michelin stars, in 2010. What was the original purpose of the building which now houses this amazing restaurant?

Noma opened in 2003, with a declared mission statement to highlight regional foods. They have succeeded - reading a description of the 12-course set menu (which they suggest you plan to take four or five hours to eat) makes me feel as if the meal would be worth flying to the other side of the world! The exterior isn't much to look at, but the interior is a graceful wood-lined space with enough room for diners to feel a sense of being luxuriously on their own, not crowded together.

The food is not to the taste of all, as you can see if you check out some reviews, but the experience is apparently unforgettable.
5. After which Danish astronomer is Copenhagen's planetarium named?

Copernicus was Polish or Prussian, depending on how you decide to refer to the place he lived in this area of Europe with borders that changed regularly. Galileo was Italian, and Kepler was German. Kepler, who worked for Tycho Brahe for a while, made use of Tycho's extensive observations in developing his famous laws of planetary motion. Tycho, a 16th century astronomer, is considered Danish, although the area where he originated is now part of Sweden.

The last significant astronomer to base his work on naked-eye observations, without using a telescope, Tycho built a research institute on the island of Kven in the Oresund Strait between Sweden and Denmark. Tycho lost part of his nose in a duel, and wore a prosthetic metallic nose for the rest of his life.
6. Travelling to Aalborg, we can visit the last building designed by a Danish architect who is best known in some parts of the world as the designer of the Sydney Opera House. Which architect designed and gave his name to this research centre which is part of Aalborg University?

Like many of Jřrn Utzon's designs, the Utzon Centre features curved lines reminiscent of sailing ships - possibly a reminder of the time he spent sailing on the Lim Fjord while he was growing up in Aalborg. The final design plans for the building were completed by his son Kim, with whom he had been working on the project since it began in 2003, and the building opened in 2008, shortly before Utzon's death.

The centre is a kind of architectural think tank, with lecture theatres, workshops and an extensive library.

It also includes an archive of Utzon's original drawings.
7. This 1883 painting shows some members of a famous group of Danish painters eating lunch in Brondum's Hotel, located in Skagen, a town near the northern end of Jutland. What was the name given to this group of artists?

This painting, 'Ved Frokosten' ('At Lunch') by the Danish artist Peder Severin Kroyer, shows some of the other members of the Skagen Painters eating lunch at Brondum's Hotel, which you can still visit when you are in Skagen. During the end of the 19th century and into the early 20th century, there was a lively artists' colony in Skagen, including both permanent residents (such as Kroyer, and Anna and Michael Ancher) and a large number of artists who visited for varying amounts of time.

The thriving artistic community also attracted writer and musicians, from Denmark and other Scandinavian countries. If you visit Brondum's Hotel, you can see a number of their works on the walls.
8. After visiting the museums of classical paintings in Aalborg, it is time to go somewhere for the younger members of the family. What famed theme park chain has a representative in Billund, a few hours drive from Aalborg?

Legoland Billund was opened in 1968 near the original Lego factory. It includes rides, movie theatres, and, yes, the chance to build Duplo and Lego constructions. Need I mention that the shop has plenty of Lego items available for purchase? This is the original Legoland theme park, and the largest tourist-attracting venue outside of Copenhagen.
9. Aalborg is not the only Danish city with a team that competes in the game featured at the Aalborg Stadium, shown here. What is Denmark's most popular sport, in term of audience attendance?

While Denmark was the reigning European champion in men's handball in 2012, football remained the country's most popular sport. In 1992 the Danish national football team won the European championship, after getting into the tournament only because the Yugoslavian team was banned from international sports competition due to internal war.

The Danish team beat Germany 2-0 in the final, one of the great moments of Danish sporting history. (That is, one of their greatest moments for those of us who believe we are all better people when our national team wins a sporting competition.

There are those, I understand, who do not rate sport that highly on the national cultural profile.)
10. The picture shows some fastelavnsbroller (I won't translate for fear of giving away the answer to the question). During what festival, more commonly associated with South American and Caribbean nations, are these treats commonly consumed?

Carnival is celebrated in Denmark on the Sunday (or sometimes the Monday) before Ash Wednesday, the first day of Lent, which usually occurs in February. Celebrations in countries where the population is mostly Roman Catholic are the best known, but in Denmark the holiday persists, albeit somewhat secularized - it is sometimes referred to as a Scandinavian Halloween, because children dress up and go around the neighbourhood collecting treats for the feast. Fastelavn are Carnival Buns; as you can see from the picture, they are sweet buns filled with whipped cream, and topped with chocolate icing.

Some towns have extensive Fastelavn celebrations, including parades and an event called "hit the cat out of the barrel", which resembles the Mexican pińata. A wooden barrel with a black cat painted in it is filled with candy, and players hit it with sticks until the barrel breaks open (the player who achieves this is crowned Queen of Cats), and then continues until all pieces of the barrel have been separated (the player who achieves this being crowned King of Cats). The candy used to fill the barrel is often that collected by children roaming the neighborhood.
Source: Author looney_tunes 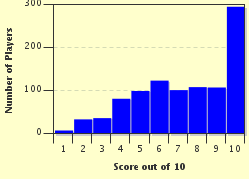 Related Quizzes
This quiz is part of series Written for the Bus Ride:

You think you can write just one, but it turns out that writing quizzes suitable for being visited by the tourists on the Bus Ride is addictive - there's just so much to find out!