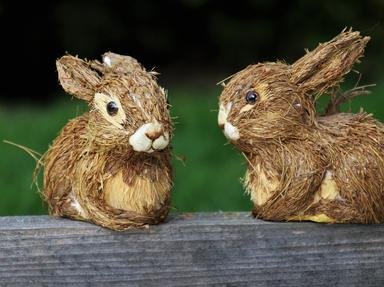 How well do you know your goat?

Share on Facebook
Share on Twitter
Share by E-Mail
Author
ctownron
Time
4 mins
Type
Multiple Choice
Quiz #
323,530
Updated
Dec 03 21
# Qns
10
Difficulty
Tough
Avg Score
6 / 10
Plays
364
This quiz has 2 formats: you can play it as a or as shown below.
Scroll down to the bottom for the answer key.

In 1945 during the World Series between the Chicago Cubs and the Detroit Tigers, a tavern owner named Billy Sianis, who ironically owned the Billy Goat Tavern, was asked to leave the game because the odor from the pet goat he brought to the game was offensive to nearby patrons. Sianis was very upset and said "them Cubs, they aren't gonna to win no more!" Through 2009 the Cubs still hadn't won a World Series.
2. The goat is one of the animals in the twelve-year cycle of the Chinese zodiac?

Each animal in the Chinese zodiac signifies certain personality traits, therefore those born in the year of the goat tend to be shy people who keep their feelings to themselves. They also tend to be creative individuals who are perfectionists in their work or craft.
3. The word scapegoat comes from which Jewish holiday?

Yom Kippur is the Jewish festival of the Day of Atonement. Tradition has it that two goats are selected via lottery. One goat is sacrificed to the Lord and the other is allowed to "escape" into the wilderness, thereby taking with it the sins of the community. This is where the word scapegoat comes from.
4. Which mythical god had a chariot pulled by two goats?

Thor, the God of Thunder in Norse mythology, had a chariot that was pulled by two goats named Tanngnjostr and Tanngrisner. According to legend, when Thor was hungry, he could eat the meat of his two goats, then simply bless their bones with his hammer and they would come back to life.
5. How many breeds of goat are there?

There are over 300 breeds of goat and are members of the Bovidae family of species. Goats are used for their milk, meat, hair and skins. They have also been domesticated as pets.
6. What are the offspring of goats called?

Pouligny-Saint-Pierre cheese comes from the town of the same name located in central France. The cheese is formed in a distinctive pyramid shape and is often nicknames pyramid and Eiffel Tower cheese. The other cheeses are all made from cows' milk.
8. Which college football team has a mascot named Bill the Goat?

Bill the Goat first appeared as the mascot for the United States Naval Academy in 1893. It may seem strange that a goat would be the mascot of a naval academy (and not some type of fish), however many navies had goats on board ship to not only eat the garbage generated, but also provide fresh milk and butter in return.
9. In 1988 which Australian noise rock band listed below had a debut album called "Paddock of Love"?

Formed in Perth, Australia by Stu Spasm, this noise rock band released its debut album called "Paddock of Love" in 1988. Later that year the band gained notoriety by playing a song from the album titled "In the Raw" in the nude on the Australian television show "Blah Blah Blah".

A documentary film of the same name, "In the Raw", chronicled the event which at the time caused quite a stir in Australia.
10. What was the name of the 2009 movie starring George Clooney regarding the military's use of psychic powers in the War on Terror?


Answer: The Men Who Stare at Goats

The 2009 Movie "The Men Who Stare at Goats" is based on the 2004 Jon Ronson book of the same name. Clooney's character Lyn Cassady is skilled in New Age techniques and is part of an army unit trained as psychic spies. Cassady claims he can stop a goat's heart by staring at it, hence the name of the movie. The movie also stars Kevin Spacey, Jeff Bridges and Ewan McGregor.
Source: Author ctownron


Other Destinations
Explore Other Quizzes by ctownron