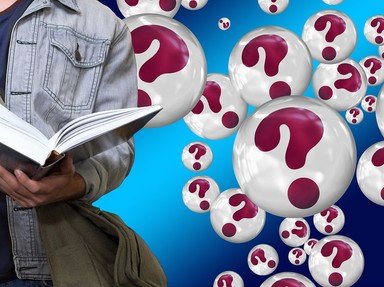 There are 250 points up for grabs in this mixed trivia quiz. Some questions may be a bit harder than others, and they're not necessarily in easy-to-hard order.

A multiple-choice quiz by Fi B. Estimated time: 4 mins.

Quiz Answer Key and Fun Facts
1. How many years apart are the summer Olympic Games?

The Winter Olympics are also 4 years apart. The Ancient Games were in Olympia, Greece, thousands of years ago. They were revived in 1896 in Athens, Greece. The 2000 Games were held in Sydney, Australia. But there are also 4 years between each Winter Olympics (2002 was held in Salt Lake City), and 2 years between the Summer and Winter Games since 1994.
2. Which of these is a TV show that features 6 friends that live in New York City?

This show has characters Rachel (Jennifer Aniston), Monica (Courtney Cox Arquette), Phoebe (Lisa Kudrow), Joey (Matt LeBlanc), Chandler (Matthew Perry) and Ross (David Schwimmer). Other names considered for the show were "Six In One", "Insomnia Cafe" and "Across the Hall".
3. Who of the following is not a famous author?

He is a famous movie director. Christie wrote murder mysteries, Austen wrote British 19th century novels, and King writes great thrillers such as "The Shining" and "The Green Mile".
4. What show has a family of five, all of whom have four fingers on each hand? This was created by Matt Groening.

A great cartoon show, and took over the previous longest-running animated show of "The Flintstones". The 5 family members are Homer, Marge, Bart, Lisa and Maggie.
5. Which of these tourist attractions does not have a site located in California, U.S.A.?

Walt Disney World is in Florida, U.S.A., and the other three are all in the sunny Pacific Ocean state. There is also a Disney Land in Paris, France.
6. What other name is Australian Football League (AFL) known as?

Or as Australian Rules. Ireland plays a similar game to this, and it is Gaelic Football. They are really the only sports in which you get points for missing the goal!
7. What is the name of the train that travels from Perth to Sydney, in Australia?

The journey crosses the country from the Indian Ocean to the Pacific. The Ghan travels through Central Australia (from Adelaide to Darwin); the Zig Zag Railway is in Lithgow, New South Wales; and the Cross-Country Express I made up.
8. Which of these colours is not on the flag of the Republic of Ireland?

The flag has three vertical columns of colour. The first is green (for the Catholics), the second is white, and the third is orange (for the Protestants).
9. Which of these singers was not in "The All-New Mickey Mouse Club" when a teenager?

This was at Walt Disney World in Florida. Spears and Timberlake used to go out. Timberlake was part of *NSync, and he and Britney and Christina all became successful recording artists. Keri from "Felicity" was also a member of "The All-New Mickey Mouse Club".
10. Who was the first Prime Minister of the Commonwealth of Australia?

Siamese is a breed of cat. They originated in Siam (the old name for Thailand).
12. Which of the following is a song from the musical "The Wizard of Oz"?


Answer: "Somewhere Over the Rainbow"

Dorothy sings it. "My Favourite Things" is from "The Sound of Music", "A Friend Like Me" is from "Aladdin" and "Colours of the Wind" is from "Pocahontas".
13. What is the name of Australia's cricketing legend who had a Test average of 99.94 runs per innings?

He played for Australia from 1928 until 1948, and captained an Ashes tour in from which his team were to become known as "The Invincibles". "The Don" once held the record for the highest Australian individual score in a Test Match, 334. Mark Taylor equalled this record in 1998 and Matthew Hayden broke it, scoring 380 against Zimbabwe in 2003. Sir Bob Geldof is an Irish entertainer. Babe Ruth was a baseball player.
14. In what chain of restaurants could you buy a Big Mac?

They also sell burgers like the Quarter Pounder or McChicken. Hungry Jack's (Burger King) sell the Whopper, and KFC sell the Original.
15. What would you normally use to help you do mathematical problems?

I was going to put computer as an alternative but then I remembered that most computers now have calculators on them, and mobile phones do now as well.
16. In what board game can you build letter tiles up on top of one another to spell out words?

Monopoly is also a fun game except at my house it always ends up in an argument.
17. In what year did Australia change their currency from the pound to the dollar?

Beethoven was a deaf musician. Michelangelo painted the ceiling of the Sistine Chapel in Italy.
19. Who created the company Microsoft?

Microsoft is a world leading software company. Disney is the father of cartoon animation, Armstrong was the first man on the moon, and Clinton was a President of the U.S.A
20. What do Alanis Morissette, Celine Dion and Bryan Adams have in common?

Yes they are all singers from the land of ice hockey. Morissette's first album was "Jagged Little Pill" and it sold 13 million copies worldwide.
21. What is the Celsius equivalent of 32 degrees Fahrenheit?

And Rome is the capital of Italy. The main place to find Hindus is in India.
23. There is a magical number in Chemistry that forms the basis of all elemental equations. What is that number referred to as?

It is a really good book too (it's sold over 30 million copies), and so is the movie. Grisham wrote "A Time To Kill" and Guterson wrote "Snow Falling On Cedars". The three books have similar types of plots and virtually the same set of moral issues.
25. What word is French for "thank you"?

Gracias is Spanish, Grazie is Italian. Thank you for doing my quiz! Please rate it, and check out my other quizzes sometime.
Source: Author Fi B 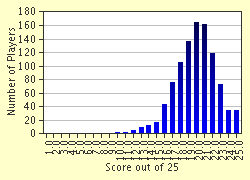