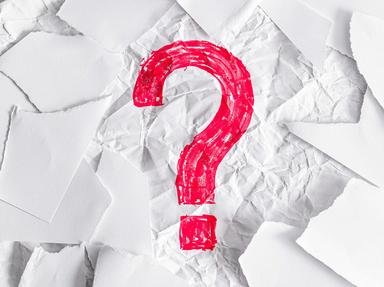 Relax knowing that you don't have to think too hard. Have fun!

Quiz Answer Key and Fun Facts
1. What are the colors of the United States of America's flag?

The color red symbolizes the fearless courage and integrity of American men and boys and the self-sacrifice and devotion of American mothers and daughters.
The color white stands for liberty and equality for all.
The color blue stands for the blue of heaven, loyalty and faith.
2. This sport consists of one player trying to throw a ball past another player who is trying to hit it. Which sport is it?

Although Abner Doubleday is considered to be the man who invented baseball, in 1845, Alexander Cartwright was the first man who formalized a list of rules to the game, many of which are still used in the game today.
3. This fruit is typically eaten when it is yellow and one must peel it in order to get to the part that is edible. What fruit am I talking about?

Did you know that the banana plant is not a tree. It is actually the world's largest herb!
4. Which of the following can typically be seen in the sky only at night time?

Shooting stars are the path of meteoroids as they come into the atmosphere.

So how many stars are in the sky? The amount ranges from more than 200 billion in our galaxy to three thousand million billion stars (3 followed by 16 zeroes) in the universe. NASA alleges there are zillions of uncountable stars.
5. Based on square footage, which of the following countries is the smallest?

Great Danes usually reach heights of 30-34 inches, while standard Dachshunds are about 8+ inches, 15+ inches for standard poodles, and chihuahuas are 6+ inches.
8. If one falls asleep at 10pm and wakes up at 8am, how many hours did this person sleep?

Australia is the smallest of all continents. It is also the lowest, flattest and, apart from Antarctica, the driest.

Some places of the world call this continent Oceania, and includes all the islands of the Pacific Ocean.
10. What hard structure protects the brain from injury?

Did you know your skull is actually made up of 29 different bones?
11. What is the title of the United States of America's national anthem?

Although Francis Scott Key wrote the anthem in the early morning of September 13, 1814, 'The Star-Spangled Banner' was not officially named as the national anthem until Congress officially named it our anthem in 1931.
12. If one were to visit the North Pole, which direction must one travel to get there?

There is actually a city in Alaska called North Pole. It is located fourteen miles southeast of Fairbanks.
13. On a typical summer day in the Northern Hemisphere, in which city would you most likely find the highest temperature?

Miami's average highs over the year range from 76 to 91 degrees, whereas the warmest time of the year for the Alaskan cities is only about 65 degrees, less than the coldest average temperature in Miami.
14. Who became president of the United States of America on 30 April 1789?

George Washington's presidency was from 30 April 1789 through to 3 March 1797.
15. If one is eating a hamburger, what kind of meat is the person most likely eating?

Did you know that the world's largest hamburger was made in Rutland, North Dakota in 1982? It weighed 3,591 pounds and was consumed by over 8,000 people.
16. If someone heard someone say the words Rose, Tulip and Marigold, what subject is the person most likely talking about?

Women tend to prefer pastel colored roses, whereas men prefer red.
17. In a typical deck of playing cards, which suits are red?

Playing cards were thought to have been invented in China in the 14th century.
18. Which of these is the fastest?

.dot, of course. .com is for commercial sites, .org for organizations and .edu for educational type sites.
20. What do the following people have in common: Ty Cobb, Hank Aaron, Babe Ruth?


Answer: They are all former baseball players

21. Which one of the following movies never had a sequel made?

Blue and yellow make green. Blue and red make purple and red and yellow make orange, in case you were wondering.
23. Not counting Kindergarten, how many years do the majority of American students go to school before they enter college?

Although some people go less years, 12 is the typical number of years.
24. A figure with three sides is called a what?

Did you know that a 100-sided polygon is called a hecatohedron?
25. How long does it take the earth to revolve around the sun?

In fact, the reason for a leap year every four years is because when the Earth has revolved around the Sun over four years, an extra day has accumulated since there is an extra quarter of a day with each revolution. In case you didn't notice, 24 hours = 1 day = 1,440 minutes and this is the time it takes the Earth to rotate around its own axis.
Source: Author bruinboy 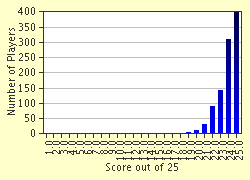 Related Quizzes
1. Believe It Or Not Very Difficult
2. World's Easiest Quiz Easier
3. Yet More Bad Jokes Tough
4. General Quiz's Army Average
5. The As You Like It Quiz Average
6. FunTrivia General Knowledge Mix: Vol 2 Average
7. Wikipedia Says So; It Must Be True Easier
8. Bit of This and That 5 Easier
9. 20 Cat-egories of FunTrivia! Average
10. Try Some Trivia! Easier
11. An 'Amazing' Collection of Facts Easier
12. Stop, Look, Listen Average


Other Destinations
Explore Other Quizzes by bruinboy