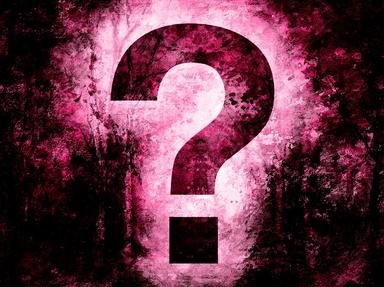 A mix of 10 General Knowledge questions, submitted by 10 different FunTrivia players! The first few questions are easy, but the last couple are tough!

Quiz Answer Key and Fun Facts
1. Leg O' mutton, puffed, and poet are all examples of which of the following things?

These three are just a few examples of the many types of sleeves that can be found on shirts and dresses throughout history. Leg O' mutton are long sleeves that are very wide at the top before tapering to a tight fit between elbow and wrist. Puffed sleeves are short sleeves usually seen on women's clothing and are gathered at both the top and bottom. Poet sleeves are long sleeves that are wide at the top and then have a wide band of gather at the wrists usually ending in a ruffle.

Mr. Hyde is the evil alter ego of Dr. Jekyll in "Strange Case of Dr Jekyll and Mr Hyde" (1886) by Robert Louis Stevenson. Mr. Dithers (Julius C. Dithers) is the boss of Dagwood Bumstead in "Blondie," the comic strip. "Mister Ed" was a 1961-1966 television series about Mr. Ed, a talking horse owned by Wilbur Post (played by Alan Young).

"Macbeth" is a play by Shakespeare about the attempt to usurp the Scottish throne, whilst the other three people mentioned are Scottish born. Arthur Conan Doyle was a Scottish physician who will be remembered as the author of the "Sherlock Holmes" series of books and short stories. Billy Connolly is a well known Scottish comedian, and Sean Connery is arguably the public favorite of the actors who portrayed "James Bond" on the silver screen.

Question by player merrijig
4. Which of these would you find in a dentist's office, on a violin, and on your nose?

The word "bridge" has many meanings. It is used to describe a dental prosthesis that replaces missing teeth. The word describes a support placed on a stringed instrument that holds the strings in place. A bridge is also the hard bony part of the human nose.

Question by player bigwoo
5. Which natural fibre, commonly used to make sacks or rope, shares its name with a group of Germanic people that invaded Britain after the decline of the Roman Empire?

Jute is a type of fibre produced from the stems of plants of the genus Corchus, whose leaves are also used as a vegetable in various Asian and African cuisines. Jute is the main constituent of hessian or burlap material and it can also be made into rope or twine or combined with other materials to make carpets.

The Jutes were a Germanic people who are believed to have originated from the Jutland Peninsula in modern day Denmark. After the decline of the Roman Empire across northern Europe and particularly following the end of the Roman occupation of Britain in the early 5th century AD, the Jutes (along with the Angles, Saxons and other smaller groups) migrated across the channel to Britain and conquered the territory. The time from that point until the Norman invasion of 1066 is often referred to by historians as the Anglo-Saxon period.

Question by player Fifiona81
6. Keeping in mind that seeing isn't always believing, what is a Hermann Grid?

A Hermann Grid is a visual illusion which consists of black squares separated with white lines (i.e. a grid).
At the corners, particularly away from your focus of vision, you should notice dark grey spots, which either disappear or are less prominent in focused vision.

Lateral inhibition is said to help us define edges and features. Imagine that your receptive fields - fields which pick up visual information - are circles. The central points of these circles are excitatory or boost signals, but the points around suppress or are inhibitory on them.

Therefore, because the intersections have more light around them in comparison to between the lines, they are more inhibitory on the receptive field at the intersection itself and cause a dark spot to appear. Because your focus of vision uses smaller receptive fields than the periphery, the dots will either not appear or be less prominent as you focus on them, as the inhibition effect will not occur.

Question by player malik24
7. What substance is added to yellow-gold to make rose-gold?

Question by player dcpddc478
8. Which one of the following is a 1951 movie featuring Humphrey Bogart, a type of Volkswagen, and a warm Mediterranean wind?

Sirocco is a warm Mediterranean wind that arises from the Sahara Desert and blows north. It is also a 1951 film-noir-style movie starring Humphrey Bogart and Lee J. Cobb that takes place in Syria around 1925. It is also the name of model of Volkswagen that was first produced in 1974.

Question by player dcpddc478
9. In 2020 during the Covid-19 lockdowns, people started noticing something called 'the cocktail crisis'. What's that?


Answer: A rise in alcohol consumption

After the Covid-19 lockdowns of 2020, health care workers in North America and Europe started noticing a rise in alcohol-related injuries and illnesses, and alcohol sales soared. For example, by October, the British Liver Trust reported a 500% rise in calls to its helpline.

In the United States, the Republic National Distributing Company reported a 50% jump in sales in March alone. This effect is generally put down to rising levels of stress, loneliness and anxiety. Staying home is also a problem. People working from home seem to be knocking back a few 'quarantinis' while on the job.

A doctor at the Canadian Centre on Substance Use and Addiction adds, "The Canadian drinking culture is one where alcohol use serves as a boundary between weekday and weekend... With the ongoing threat of COVID-19, these boundaries have become blurred."

Question by player Sidd2
10. What do the theatrical cartoon character Chilly Willy, Munsingwear golf and polo shirts, and a satirical "history" of a fictional island by Anatole France, have in common?

The Chilly Willy who entertained theatre audiences in the 1950s and 1960s was erroneously depicted as a penguin living in Alaska when all penguins live naturally in the Southern Hemisphere. The creation of Walter Lantz Studios, Chilly Willy also appeared on television with Woody Woodpecker.

The forerunner of Munsingwear was created to manufacture union suits -- long underwear! It first sold a sports shirt with a penguin logo on the breast in 1955 and went on to become the world's largest manufacturer of polo and golf shirt in the 1970s. Anatole France set his Penguin Island ( L'Île des Pingouins) in the ocean off the coast of northern Europe.

In the 1908 comedic novel, France criticizes everything about European society by mocking a civilisation in which Great Auks are turned into human beings by God.

The work is delightful, inventive, humourous, provoking of thought and yet never widely popular.

Related Quizzes
1. Country Matchmaker Easier
2. Ten Easy Questions (Or Are They?) Easier
3. Bit of This and That 5 Easier
4. World's Easiest Quiz Easier
5. Europa and the Pirate Twins Easier
6. A Picture Quiz on a Bunch of Things Easier
7. Tell the Truth Easier
8. Pictorial Mixture Easier
9. Wikipedia Says So; It Must Be True Easier
10. All Questions Lead to Rome Easier
11. Try Some Trivia! Easier
12. An 'Amazing' Collection of Facts Easier