Bit of This and That 5 Trivia Quiz

Some more bits and pieces I've come across from time to time. Have fun.

Quiz Answer Key and Fun Facts
1. After the unfortunate Catherine of Valois died, what was done with her body?


Answer: It was left on display for centuries

Catherine of Valois (1401-1437) was the daughter of Charles VI of France. She married the famous Henry V of England in 1421, when peace temporarily ensued between England and France. Henry died eight months later when Catherine was in an advanced state of pregnancy, following which she gave birth to Henry VI (1421-1471). When later rumours began to circulate that Catherine planned to marry again, England passed a bill saying she couldn't marry unless her son gave permission - and he could only give that permission when he reached his majority. He was just six at the time.

Catherine, though, went on to have an affair with, and fall pregnant to, the Welshman Owen Tudor. The pair had six children at least, and from that relationship sprang the later Tudor dynasty. When Catherine died, she was buried in Westminster Abbey, with an alabaster memorial on her tomb. Her grandson, the Tudor Henry VII (1457-1509), later ordered the memorial relocated, so as to remove any visible reminder of the illegitimate origins of his family. The lid on Catherine's coffin was dislodged during this undertaking however, and, instead of decently re-interring Grandma, poor Catherine's corpse was left on display for several centuries. "Yes, little Johnny, that corpse is the Queen of England. Perhaps you'll marry a Queen of England one day. Wait - wait - Johnny, come back!"
2. The Giant Burrowing Frog of Australia is either a little confused, or has an identity crisis. What sound does it make?

Australia certainly has some unique and wondrous creatures. The Giant Burrowing Frog is just one of these. In addition to its weird call, it looks more like a toad than a frog, but a frog it is. It is large, has a dark gloomy-coloured back, a white stomach, rough and bumpy skin, a yellow stripe on its top lip, vertical pupils and black jagged points on its fingers. During the seasons of autumn and spring, the male of this species calls loudly from its burrows in an endeavour to lure a lady frog into its clutches. This call is exactly the same as that of an owl, which must be a little confusing for the lady in question. As frogs are considered a delicacy both for the French and owls, it would be a daring or desperate female who responded to that call. "When I'm calling hoo-oo-oo-ooot, hoo-oo-oo-ooot".

Then again, we have the Australian Blue Ant. That isn't an ant at all. It's a wasp. Yes, we're definitely confused down here.
3. Only one living species of the ancient Judean date palm was alive in 2015. What nickname has this tree been given?

The Judean date palm was a valuable species of tree grown in Judea for thousands of years until climate change made it extinct. Found around the Dead Sea and the Galilee Sea in copious quantities, this tree was one of the major contributing factors in the growth of Jericho. It was used as a valuable source of food, shelter and trade, with its fruit particularly known for its rich flavours and gifts of nourishment. It was also utilised to treat infertility, tumours and infections and as an aphrodisiac. By the 14th century, however, the tree no longer existed - until a miracle happened.

When Herod the Great's palace was excavated at Masada, Israel, during the early 1960s, an ancient jar full of the tree's seeds was, incredibly so, found there. Buried for centuries, these seeds dated back to approximately 100 BC. In 2005, they were treated with an enriched solution in the hope that they would germinate. Three were planted in the south of Israel, and, miraculously, within eight weeks, one had sprouted. It has been given the nickname Methuselah, after the oldest person listed in the Bible. Fingers crossed, it is hoped by crossbreeding the tree with the Hayany palm (its nearest relative), the seeds of the Judean date palm will one day see the deserts in Israel bloom once more. How truly wonderful would that be?
4. The Isles of Scilly and the Netherlands fought a war that lasted 335 years, from 1651 until 1986. What was unusual about this war?


Answer: No shots were ever fired

The Three Hundred and Thirty Five Years War lasted from 1651 until 1986. It was fought between the Isles of Scilly (off the tip of the Cornwall peninsula in the United Kingdom) and the Netherlands. The comical fact about this war that wasn't a war at all is that nobody is really sure whether a war was officially declared to begin with. The origin of this mighty event took place during the Second English Civil War (1648-1649) when Oliver Cromwell and his forces had driven the Royalists supporters right to the edge of the kingdom at Cornwall. There the Royalists were forced to flee for their lives to the Isles of Scilly.

At that time in history, the Netherlands were allied with Cromwell's forces. The Royalist navy, which had moved to the Isles of Scilly, managed to inflict a heavy toll on the Dutch navy which had sailed there as part of its alliance with Cromwell's forces. Admiral Tromp of the Dutch navy - without consulting his parliament back home - demanded reparation from Scilly, and Scilly's response was a hearty thumb of the nose. So Tromp accordingly declared war on the Isles of Scilly. Shortly afterwards, however, the Royalist fleet surrendered to Cromwell's forces, and the Dutch fleet merrily sailed back to the Netherlands, without ever firing one shot, and where their parliament forgot to declare peace with Scilly, even though it had never officially declared war in the first place. And that's the way things remained until the 17th April, 1986, when a jovial peace treaty was signed between the two "combatants" at last.
5. Over time, as flowers began to develop longer tubes, how did bees respond?

Nature is amazing. Over thousands of years, as flower began to develop longer tubes, bees, as a result, also evolved. They developed longer tongues with which to extract their nectar and pollens from the flowers. So impressive.

Did you know that there are more than 20,000 species of bees in the world, and that they originally evolved from wasps? They are found in every single part of the planet in which pollen and nectar producing plants bloom. Bees, by their pollination of plants as they move to and fro, play a vastly important part in the ecology of our world. There is no more lovely sight that these miraculous little creatures hovering from flower to flower in the spring as they busily go about their work. It fills one with a sense of awe and wonder.
6. During a massive flood in Kentucky in 1937, what did a worker catch in the lobby of a hotel in which he worked?

The Brown Hotel in Louisville, Kentucky, along with many other places, went under during this disaster in 1937. The result of heavy rains which drenched the area for days soon saw the Ohio river break its banks. As it rose to the highest levels in its recorded history, the immediate surrounds of the area were swamped with its waters. Known afterwards as "The Great Flood of 1937", ninety lives were lost during this disaster. Every cloud (pardon the pun) would appear to have a silver lining, however, for in the lobby of the Brown Hotel, an intrepid worker there managed to catch himself a large fish which had swam inside. Guess what was on the menu that evening?
7. During the course of his medical career, American anatomist Caspar Wistar created a set of models from human body parts. He preserved them by injecting them with what?

Wistar, who lived from 1762 to 1818, was an American physician and anatomist who was born in Pennsylvania. His interest in medicine grew from his work of assisting with the care of the wounded at Germantown during the American Revolutionary War (1775-1783). From that experience, he went on to study at the universities of Pennsylvania and Edinburgh, eventually rising to the rank of professor, and then to the chair of anatomy back at the University of Pennsylvania.

To aid his students in their lessons on anatomy, this somewhat ghoulish leader in his field began to construct anatomical models of human body parts for his classes to study. To preserve them from decomposition, he injected each part with wax, so his hapless students had the joy of handling long dead bits of humans with which to familiarise themselves.
8. No Punch and Judy operator can consider himself a professor of the art until he has swallowed *what* at least twice?

Punch and Judy shows have been around since the 16th century. They first began to be performed in Italy, and made their way from there to the rest of Europe. By the 9th May 1662, they had reached England and began touring there, becoming a much loved part of exhibitions and travelling shows for centuries. That date has been marked as Punch's birthday ever since in the United Kingdom. Such was the popularity of these shows that several performances even included Shakespearian productions. The mind boggles at the notion of that.

A swazzle, which is sometimes referred to as a kazoo, is a metal device that is used by the operator of a Punch and Judy show to give Punch his distinctively harsh voice. As the device is only allowed to be used as part of Punch's characterisation, the operator has to quickly place the swazzle at the back of his mouth each time before bringing Punch back on to centre stage. This was swallowed so often over time by the poor fellows that they took to fastening a piece of thread to one end, so they could drag it back up again when it slipped down their throats. Any operator of a Punch and Judy show today, however, cannot call himself a true professional unless he has swallowed his swazzle at least twice.
9. Whales evolved from land-based animals.

Indeed they were. Isn't that astonishing? Whereas most land animals evolved from the ocean, the awesome whale's ancestors were land-based animals that evolved to become ocean-based creatures instead. Perhaps that's why they try to beach themselves every so often. They're simply trying to get back home.

In Whales Valley in Egypt, a place some ninety miles south-west of Cairo, archaeologists have discovered the fossils of hundreds of these once land based whales. Initially these were found at the beginning of the 1900s, but access to the area wasn't available for another hundred years. This was when archaeologists began to seriously pay attention to the find. With the same body shape as the whales we know today, these whales had five fingers instead of flippers on the front limbs, and, even more incredibly, showed evidence of hind legs, complete with feet and toes. Can this really be true? It certainly is one whale of a tale if so.
10. Oh my goodness, you'll love this one. Sneezing, in some people, is actually caused by what?

A rare result of a sneeze, however, is one produced by a state of sexual arousal in the sneezer. Scientists believe this is a result of crossed wires in the nervous system. The nose itself, which will also fascinate you, actually contains the same erectile tissues as the genitals. The good Lord must have been having a joke at our expense with that one. Either way, those few who sneeze when experiencing sexual arousal must be embarrassed at times, depending where they let one rip.
Source: Author Creedy 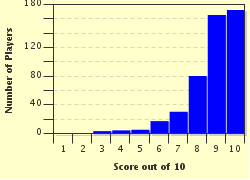