You won't have to use hardly any of your brain for this quiz. The questions in this quiz will be so simple that anyone can do it. I don't need to tell you good luck. Have fun!

Quiz Answer Key and Fun Facts
1. Stephanie, who is an American, is looking at her calendar and sees that she should be going out to buy candy and thinking about buying costumes for her three children. Which month would Stephanie most likely be doing these activities?

We can buy candy any time of the year. However, lots of people that get into Halloween buy candy to pass out to kids that come to their door. Costumes are also associated with Halloween. Little kids like to dress-up as their favorite fairy tale characters or just let their minds be wild for one night.
2. Timothy has recently got himself hooked on a certain series of books that has a character named Hermione in it. Which of the following books would most likely take care of Timothy's literature needs?


Answer: Harry Potter and the Order of the Phoenix

If you have read even one book out of the Harry Potter series, you would know that there is a character named Hermione in it. "Harry Potter and the Order of the Phoenix" is just one book out of the series. Hermione is one of the main characters. She is friends with Harry and Ron Weasley. She is a brainiac and thinks she has to start studying for her finals at least a month in advance.
3. What kind of animal is Garfield?

Garfield is a cat. He likes to sleep and eat most of the time. Not most of the time, all the time. When he isn't doing that, he is trying to figure out Jon and why Jon is such a weird person. Odie is a different story. Garfield just naturally enjoys torturing Odie.
4. Marcy thinks she is coming down with a cold. She has all the symptoms that deal with a cold. She has a sore throat, she is constantly blowing her nose, and she thinks she has a temperature. Out of these three symptoms, which of the following would tell if she had a temperature?

The thermometer is the only thing that would work. A thermometer measures your temperature to see if your temperature is high, low or just right. There is something in the thermometer called mercury that helps with taking your temperature. Normal body temperature is 98.6 Fahrenheit.
5. Noah, who is only four years old, enjoys a certain educational show that has a blue character on it named Grover. This show has helped him with his alphabet and counting. Which of the following shows, would help Noah with counting and reciting the alphabet?

It's our good pals over at Sesame Street that can help Noah with this. At the end of "Sesame Street", Big Bird, Grover, Cookie Monster, or some little muppet will come on and say for example today's show has been brought to you by the letter "K" and by the number 10.
6. Nathan's parents ask him what he wants for Christmas. He tells them he wants an apple that includes a CD burner, fast Internet access, and blank discs to burn CDs. What is Nathan asking for?

If you figured out by my description, Nathan wants an Apple computer. Other brands of computers would include Dell, Compaq, and Gateway.
7. Which of the following is NOT a type of U.S. currency?

There is no such thing as a 16-dollar bill. The other three are in circulation and are normal.
8. Ginger, a senior in high school, wants to deal with animals as a future career. Which job would she be interested in?

A vet is someone that deals with animals in all sorts of ways. Giving medication if the animals are sick, putting them to sleep if the animals are in too poor condition to continue living, and also, vets do other things as well. A medical doctor is someone that listens to your pulse, takes your blood pressure, prescribes medications, and does other things as well.

A neurosurgeon is a person that deals with the brain, and a psychologist is someone that studies the mind and human behavior.
9. Believe it or not, Kristin actually enjoys eating anchovies. Which food would you most likely find anchovies on?

Pizza is where you would most likely find anchovies. I did receive a note from another Funtrivia player, and he told me that some people do put anchovies on spaghetti. I have never tried anchovies. So if you like them, bon appetit.
10. Oscar who is 11 years old likes watching a show that has a character named Donatello in it. Which of these following television shows will please our buddy Oscar?

Oscar is most happy seeing Donatello in "The Teenage Mutant Ninja Turtles". Donatello is one of the turtles in there along with his other three buddies Michaelangelo, Raphael, and Leonardo. These turtles are pizza loving guys.
Source: Author SapphireTiger31 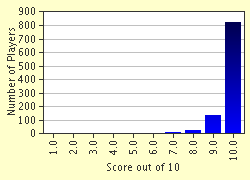 Related Quizzes
1. It's Not Fanny Brice Easier
2. No Brainer Brain Teasers - Part 2 Very Easy
3. The Seven Cs Easier
4. My Question is Not Original Very Easy
5. A Panoply of Trivia 2 Easier
6. General Mixture #1 Very Easy
7. General Mixture #2 Easier
8. A Mix of Trivia Easier
9. It Is Nearly All Over Easier
10. It's A Bird! It's A Plane! It's An Unusual Sight Easier
11. Extreme Mix-and-Match Easier
12. There Is No Theme To This Quiz Very Easy


Other Destinations
Explore Other Quizzes by SapphireTiger31