My Question is Not Original Trivia Quiz

An authoring challenge quiz. These questions should be very easy as they are not original, they are paraphrases of questions I see repeatedly in the general games of Funtrivia. I suspect you've come across them before as well.

Quiz Answer Key and Fun Facts
1. What is the name of the speaking black cat in "Sabrina, the Teenage Witch"?

The cat was called Salem and voiced by Nick Bakay - he even sang in a couple of episodes. Sabrina herself was played by Melissa Joan Hart.

I have no idea why this seems to be so common a question but it seems to be one I come across almost every week. Of course, animals are always a good subject as are favorite childhood shows but I didn't think the show was that popular. There are also a lot of questions about Eddie the dog from "Frasier".
2. Who played Derek Zoolander and Gaylord "Greg" Focker?

These may be two of Ben Stiller's most memorable characters... or is it just that both names are used in the film titles - "Zoolander" and "Meet the Fockers" (after "Meet the Parents" of course). Maybe some day soon we'll see Larry Daley (from "Night at the Museum") or Walter Mitty (from "The Secret Life of Walter Mitty") mentioned in the question instead.
3. What is the only mammal that can truly fly?

It is an interesting enough fact that bats are the only mammals that can fly, but how about changing the question around for once? Why does no-one ever ask it as a true/false ("Can any mammal truly fly?") or change it around a bit ("How many species of mammals can truly fly?")
And what's with this "truly" anyway? Do we normally ask trivia questions about "untrue" things?

Note: using "Golden Retriever" as a possible answer was a joke, based on the number of questions I see about "Air Bud" a Golden Retriever who could fly - or at least jump a lot!
4. Which popular American novel exploring racism in the Deep South begins "When he was nearly thirteen, my brother Jem got his arm badly broken at the elbow."?


Answer: To Kill A Mockingbird

It does not surprise me much to see this question repeated. "To Kill a Mockingbird" is one of the great novels of the Twentieth Century and the first line is fairly well known. There are also a lot of questions that center on the fact that this was Harper Lee's only novel of the Twentieth Century or that refer to the 1962 film starring Gregory Peck.
5. First the police collect evidence and testimony around a crime, usually a murder. In the second half of this show, the district attorneys try the case. What is it?

The same format (and in a lot of episodes, almost the same scripts) were followed in "Law & Order : UK". Among the spin-offs, "Law & Order : SVU" came closest to following this formula on a number of episodes but there was always much more mingling between the police and courtroom sections.

Again, I'm not really sure why this question comes up quite so much. It is a nice distinctive feature of the show, but there are so many other distinctive dramas out there nowadays.
6. This Jodie Foster movie co-stars Steven Ford and William Fichtner and is about a scientist (Jodie Foster) who receives signals from outer space with instructions to build a machine.

"Contact" (1998) was based on a novel by famed scientist Carl Sagan.

Maybe this question comes up in its many forms because this is considered a reasonably well known film without being in the "everybody knows it" category that would have made it too easy a question.
7. Who was the beautiful American actress who became a princess when she married the Prince of Monaco in 1956?

Grace Kelly was married to Prince Rainier III until 1982 when she died in a car crash.

I can understand the popularity of this question - the whole "Cinderella" story element makes this information worth remembering. But how come I've never seen a question asking which Prince she married?
8. With which show would you associate Blanche, Sophia, Rose and Dorothy?

"The Golden Girls" (1985-1992) was a sitcom about four older women living together in Miami.
9. Who wrote the Harry Potter books?

This heptalogy of a boy, a school and magic is one of the most famous series of the last twenty years. Somehow I think you might get this one correct even if you hadn't already seen it twenty times on FunTrivia.
10. Which song is associated with Miley Cyrus' father?

Poor fellow, it seems like Billy Ray Cyrus is almost never named in the question, as if his entire fame is now subsumed to his daughter. And why is the question always about this particular song... is it supposed to have been prophetic for his time watching her antics?
Source: Author DragonLadyBlue 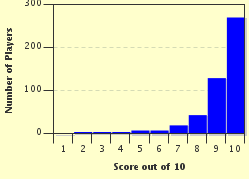 
Other Destinations
Explore Other Quizzes by DragonLadyBlue