See how many of these relatively easy questions you can answer correctly.

Quiz Answer Key and Fun Facts
1. Children attending American public school are most likely to ride in what type of vehicle when going to and from the campus?

In America, most children that live outside of walking-distance to school have the option of riding on a school bus which is provided out of tax money. Of course, children of families that can afford a limousine likely are tutored privately and do not attend a public school.
2. What should a US driver do when seeing a traffic signal has a red light illuminated?

When a traffic light shows red, a driver must come to a full stop and not proceed until the light is green, and then only after checking cross-traffic. When the light is yellow, it means the light is changing from green to red.
3. Your father's brother is what relation to you?

Any brother of your father or mother, or husband of your father's or mother's sister, will be your uncle.
4. What comedic actor starred in the American TV sit-com "The Dick Van Dyke Show" (1961-66)?

This sophisticated sit-com centered around the character Robert Petrie who was a comedy writer for the fictitious New York based "Alan Brady Show". Most of the episodes involved Rob's predicaments at home or at the studio and relied heavily on Dick's talent for physical comedy.
5. If someone gave you a kumquat, what would you best do with it?

The kumquat is a delicious citrus fruit, about the size of a large olive, which resembles a tiny, oblong orange. The whole fruit is eaten raw, including the rind, or used in making jellies and preserves.
6. If you re-arrange the letters NAPIS, what country could you spell?

Of course, the letters can be rearranged to spell Spain. Spain's capital is Madrid.
7. If you ordered a "blue plate special" in an American diner, on what color plate would you expect your meal to be served?

A "blue plate special" was a term used mainly from the 1920s to the '50s which referred to an inexpensive meal offered by restaurants (a.k.a "daily special"). It usually consisted of a meat entree and several vegetables, which changed on a daily basis, and served on solid blue or blue patterned divided plate.
8. In what sport is a ball with "dimples" on the outside used?

A golf ball's specifications are regulated by both the Royal and Ancient Golf Club of St Andrews and the United States Golf Association. It can not be more than 1.68 inches in diameter, not weigh more than 1.62 ounces and the maximum velocity of the ball may not exceed 250 feet per second. It can have anywhere from 250 to 450 dimples, depending on the manufacturer.
9. Motor oil can be used in edible salad dressing.

Motor oil, while good for lubricating motor engines, would not be good for living things to ingest. In fact, it would probably be quite toxic.
10. Hollywood, California is most famous for what? 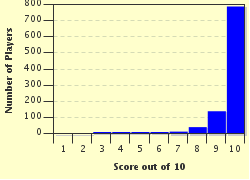