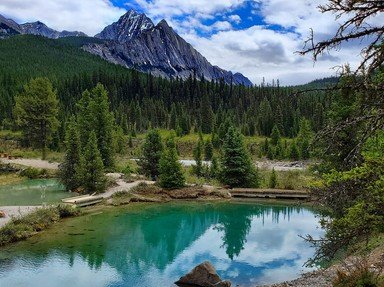 This is a quiz on Alberta that I hope will be entertaining and challenging.

Share on Facebook
Share on Twitter
Share by E-Mail
Author
bashzog
Time
4 mins
Type
Multiple Choice
Quiz #
115,875
Updated
Dec 03 21
# Qns
15
Difficulty
Tough
Avg Score
9 / 15
Plays
1982
This quiz has 2 formats: you can play it as a or as shown below.
Scroll down to the bottom for the answer key.

Quiz Answer Key and Fun Facts
1. What is Alberta's area?

Alberta is the fourth largest province.
2. What is Alberta's motto?

"Glorious and free" is the motto of Manitoba. "Je me souviens" or "I remember" is Quebec's motto. "One defends and the other conquers" is Nova Scotia's motto.
3. Which is not an official symbol of Alberta?

The lodgepole pine is Alberta's provincial tree, the wild rose is the flower, and the great horned owl is the bird. Although many people think of the Rockies when they think of Alberta, the mountains are not official symbols of Alberta.
4. Which Alberta town does singer k d lang come from?

k d lang was born Katherine Dawn Lang in 1962. Her first band was the Reclines, a tribute band to Patsy Cline.
5. Which of these states in the United States is in the same time zone as Alberta?

There are six states that are completely in the same time zone. There are several others that are partly in the Mountain Time Zone.
6. Who or what is Kinosoo?

Kinosoo was said to be a giant fish who lived in Cold Lake. The town of Cold Lake has a summer festival honoring the legend of Kinosoo, and he is on the town crest.
7. Who was Alberta named after?

Princess Louise Caroline Alberta (1848-1939) was Queen Victoria and Prince Albert's sixth child. She became, on marriage, the Duchess of Argyll.
8. Who was Alberta's first premier?

Alexander Rutherford was a member of the Liberal Party and was premier from 1905 to 1910. His house is now a museum in Edmonton.
9. There are poisonous snakes in Alberta.

Prairie rattlesnakes are fairly common in the grass lands of Southern Alberta. They will often share the same winter hibernaculum with bull snakes.
10. What is the largest lake entirely within Alberta?

Lake Claire, at 1436 km˛ is the largest lake entirely inside Alberta. Lake Athabaska is larger, at 7936 km˛, but it is mostly in Saskatchewan. Lesser Slave Lake is the next largest, with 1168 km˛.
11. When was Treaty 8 first negotiated?

Treaty 8 was the largest land settlement up to that time between the Canadian government and aboriginal people. It covered the area that is now northern Alberta, and some of northern B.C., Saskatchewan, and southern N.W.T..
12. What is a hoodoo?

It is a sandstone structure that is formed by erosion. A caprock holds down the sandstone, and keeps it from washing away. This creates surreal and other-worldly looking rock pillars.
13. Which river flows through Edmonton, the capital?

The North Saskatchewan River starts in the Columbia Icefields and passes through Edmonton on its way to Hudson Bay.
14. What other dinosaur was Albertosaurus most like?

At 26 feet Albertosaurus was smaller than the 50 foot long T-Rex, but was physically similar. It lived in Alberta in the Late Cretaceous Period. You can see its bones in the Royal Tyrrell Museum in Drumheller, Alberta.
15. Which is not a wild cat found in Alberta? 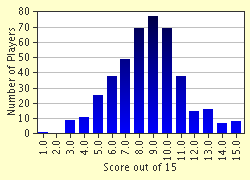 Related Quizzes
1. What I Did On My Holidays Average
2. All Hell For A Basement Average
3. Edmonton, Canada: The Gateway to the North Average
4. All About Fort McMurray! Tough
5. The City of Calgary Average
6. Wildrose Country Geography Average
7. Awesome Alberta Average
8. Welcome to Edmonton! Average
9. Alberta Fun Facts Average
10. Alberta Emblems and Symbols Average
11. Agony of Alberta Tough
12. Alberta Attractions Average


Other Destinations
Explore Other Quizzes by bashzog