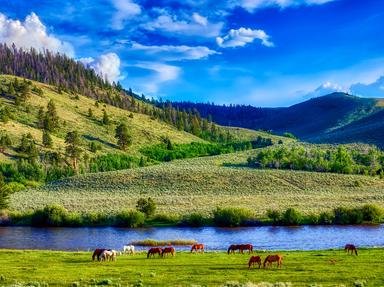 This quiz will test your knowledge of the highest points of ten different states. Best of luck!

Quiz Answer Key and Fun Facts
1. Our first 'high' point is actually only 345 (105 meters) above sea level. What is the name of this high point of Florida that lies in Walton County near the border with Alabama?

Even though Britton Hill is the highest point of Florida it is actually at a lower altitude than the lowest point of sixteen states in the USA. Within Lakewood Park there is a monument and information board describing Britton Hill.
2. The tallest mountain in the United States rises 20,310 feet (6,190 meters) above sea level. What is the name of this mountain whose name comes from a native Athabaskan word meaning 'the tall one'?

Denali contains the highest point in all of North America and by topographic prominence it is the third most prominent peak after Mount Everest and Aconcagua. Throughout much of the 20th century and early 21st century Denali was known as Mount McKinley in honor of the 25th President of the United States.
3. Which state that is geographically known for containing the southern terminus of the Appalachian Trail and Stone Mountain has its highest point at Brasstown Bald?

Brasstown Bald is located in northern Georgia in the Blue Ridge Mountains and it has an elevation of 4,784 feet (1,458 meters). The mountain is located in an area with many Cherokee natives who refer to the mountain as Enotah.
4. One state has its nickname and highest point named after a plant that exhibits heliotropism. What is the name of this state that was admitted to the Union in 1861?

Mount Sunflower rises to 4,039 feet (1,231) and it is located in western Kansas less than one mile from the border with Colorado. The highest point of Kansas is located on private land and it is indistinguishable from the surrounding area because the elevation of Kansas increases gradually from east to west.
5. What state has its highest point at 1,670 feet (510 meters) just 3.5 miles from its northern border and the Des Moines River on its southern border?

Located in Cook County, Eagle Mountain is frequently visited by hikers and it is located near Whale Lake. Interestingly there are two peaks named Eagle Mountain in Montana, one in New York, and a range in California.
7. The highest point in the state of Utah provides a view worthy of royalty. What is the name of this high point that was named after the first director of the United States Geological Survey?

Kings Peak has an elevation of 13,528 feet (4,123 meters) and it is named after Clarence King who surveyed the area. It is located 79 miles east of Salt Lake City and with a prominence of 6,358 feet (1,938 meters) it is the fifth most prominent peak in the Rocky Mountains.
8. Mauna Kea is more than 33,000 feet tall when measured from its oceanic base. On which island, the largest in the state, is Mauna Kea located?

Mauna Kea is 13,796 feet above sea and thus it rises more than 19,000 feet from its oceanic base to sea level. Mauna Kea is a dormant volcano and it is estimated that it last erupted between 4,000 BCE and 2,000 BCE. The island of Hawaii is the largest of the Hawaiian islands and with an area of more than 4,000 square miles it is the largest island in the United States.
9. The highest point in the state of Wyoming is located on the Continental Divide and it is named for a famous geographer. What is the name of this high point that shares its name with a bird that is a close relative of the booby?

Henry Gannett is considered a pioneer in topographical mapmaking for the U.S. government and he is known as the "Father of the Quadrangle". Gannett Peak has an elevation of 13,809 feet (4,209 meters) and it is considered very challenging to climb with most round trips taking between four and six days.
10. The highest point in the state of Washington is the focal point of a National Park that was established in 1899. What is the name of this 14,411 feet (4,392 meters) high point located 54 miles from Seattle?

Mount Rainier is an active stratovolcano and it is the most topographically prominent mountain in the United States after Mount McKinley. In 2014 almost 1.9 million people visited Mount Rainier National Park and about 10,000 people attempted to reach the summit.
Source: Author Triviaballer 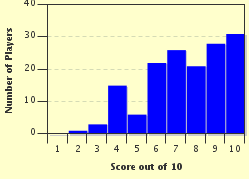 Related Quizzes
This quiz is part of series Pictures of the World:

Some of my photo quizzes in the geography category